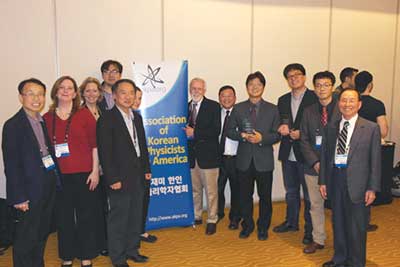 A group photo taken after the 2015 OYRA award ceremony during the FIP reception at the APS March Meeting 2015.

I am pleased to take this opportunity to introduce APS members to an organization that has been working for almost four decades to foster U.S.-Korean physics collaboration, and to excite young Koreans and Korean-Americans in the United States about studying physics. The Association of Korean Physicists in America (AKPA) was founded in 1979 in Washington, DC, with Dongyoung Lee as the first president of the organization. It was established to promote collaboration and academic exchange as well as networking among members. In 2014, AKPA celebrated its 35th anniversary in a symposium at the University of Chicago, in which close to 100 physicists from Korea and from the U.S. participated. This event was jointly supported by the Korean Institute for Basic Science (IBS), the Korean Consulate General of Chicago, the Korean-American Scientists and Engineers Association (KSEA), the Korea-U.S. Science Cooperation Center (KUSCO), the Korean Physical Society (KPS), and APS.

Building on its previous successes, AKPA has accomplished a tremendous amount since Eun-suk Seo wrote about the association in the Spring 2013 Newsletter of the APS Forum on International Physics (FIP). First of all, the membership of AKPA has grown substantially. The number of registered members on the overall email list is now close to 500. The total number of active members, including the associate members (who are not physics majors but are either in related areas or family members of an AKPA member), grew from 135 to 240 (a 78% increase). Among these, the number of lifetime members has grown from 27 to 40, and 151 AKPA members are also jointly registered in the KSEA.

To bring physics closer to the community, the AKPA initiated a National High School Physics Contest (NHSPC) jointly with KSEA in 2012 as a pilot program in the North Texas and North Carolina chapters. NHSPC has reached a milestone, having a total of 108 participants showcasing their physics skills across the nation. Many of them are of non-Korean ethnic origin. Of the 109 participants, 23 (21%) were female students. This total number is a marked increase compared to NHSPC2013, with 52 participating students in 9 locations.

While the NHSPC seems to have taken hold, it still is in the toddler stage, and there is plenty of room for growth. A notable change this year is that 2 of the 14 sites had physicists of non-ethnic Korean origin helping with the organization by proctoring and grading the contest, along with an increased number of non-ethnic Korean participants (22). The physicists were very excited about this contest and are willing to help next year. I truly believe this is an excellent sign that NHSPC can become not just an ethnic Korean event but can evolve into a nationwide event that would allow us to be a leader in this endeavor, working closely with APS.

In 2014, AKPA became an officially registered 501(c)(3) nonprofit organization. This allowed us to raise funds in a much more substantive manner. To leverage this status, a Fundraising and Special event Committee (FSC) was established. FSC took action immediately and established the Kiuck Lee High School Physics Scholarship endowment in 2015, thanks to the generosity of the late professor Lee and his family. This scholarship will be awarded to the top three winners of NHSPC, starting in 2016. FSC also established the AKPA Named Scholarship Policy, which the Executive Committee has subsequently ratified, for future donations.

AKPA and KPS have been working closely together as in the past. This tight cooperation has been exemplified in granting two Outstanding Young Researcher Awards (OYRA) jointly for five years in a row. We were able to invite both OYRA winners this year — Donghui Jeong of Pennsylvania State University and Donghun Lee from the University of California, Santa Barbara — and we presented the award at the FIP reception at the 2015 APS April Meeting. AKPA works closely with FIP and is one of the major contributors to the forum. The two OYRA winners showcased their research at the Korean Physicists Symposium during the 2015 APS March Meeting.

AKPA continues to work very closely with KSEA. Not only did many AKPA members play significant roles in U.S.-Korea Conferences and lead them splendidly, but they also played various roles in many KSEA events. A good example is the KSEA’s Professional Development Workshop Event (ProDeW) in 2014 in Chicago. Since many AKPA members play leading roles in the field of physics in the U.S., they can naturally become role models to younger generations.

While there is still a long way to go, AKPA’s finances are healthy and becoming more stable. We, the members, have all worked together to bring us this far. Last but not least, I am in tremendous debt to the executive committee and the members of all the committees. They, and indeed all members, have contributed their time and effort to raise AKPA to this level. This shows the underlying strengths of AKPA on which future progress will be built.

AKPA has a new administration as of May 1, 2015, under the leadership of Seunghun Lee of the University of Virginia, the 31st president of AKPA, who will take the organization to the next level with the enthusiastic participation of all AKPA members.

Jaehoon Yu is the 30th president of AKPA and is professor of physics at the University of Texas at Arlington. Yu is a particle physics experimentalist involved in Higgs searches and precision measurements of its properties at the ATLAS experiment at the LHC. He is also working on low mass dark matter search and neutrino experiments at the high intensity proton beams at Fermi National Accelerator Laboratory.