Can the U.S. Work Well with International Partners? 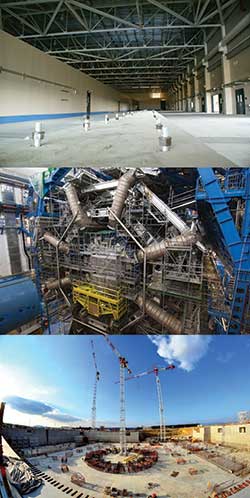 Models of collaboration (top to bottom): past (SSC), present (CERN), and future (ITER).

The consensus among policy makers at the 2015 APS April Meeting in Baltimore is that large international collaborations are the future of “Big Science” research projects. However, arriving at the best role the United States can play is complicated.

Right now the Department of Energy (DOE) is putting together the Deep Underground Neutrino Experiment, the first major international physics collaboration hosted on U.S. soil. Those in charge have been looking to other collaborations as a guide for how to manage current and future international projects in the United States.

“The trend now is to do these big science projects internationally,” said Nigel Lockyer, the director of Fermilab. “The trick for us here in the U.S. is we need to start to understand how we will host an international science facility on U.S. soil.”

The trend in particle physics carries over into astrophysics as well. “Most major projects in practice are multinational,” said Roger Blandford of the Kavli Institute for Particle Astrophysics and Cosmology. “We’re not going to be able to afford to be the major player in everything. It’s just unrealistic.”

This introspection was prompted by the 2013 Particle Physics Project Prioritization Panel report, which called for the Deep Underground Neutrino Experiment (DUNE, formerly known as the Long Baseline Neutrino Experiment) to be converted from a primarily U.S. project to one that brings together a number of international partners.

[This is] … “partly because the costs are so big and partly because it makes sense to bring together the science community of the world,” said Lynn Orr, the head of research at DOE. “The [DUNE] group has been able to assemble faster than I think anyone had thought would happen.”

Lockyer, however, sounded a note of caution about the future of such collaborations. “It’s not clear to any of us that our present system is set up in order for us to be a reliable host for other countries to invest in,” Lockyer said. “For us to take on the role of a friendly, reliable host is something we’re not used to. … We must figure out how to host an international facility.”

Speakers highlighted two European facilities operating under different management styles as role models and cautionary examples of how to run a collaboration. “CERN has done a great job of pulling together the world for their project, the Large Hadron Collider (LHC). It’s clearly been super-successful,” Lockyer said. “That is the type of thing that we want to do with neutrino physics in the U.S.”

Orr echoed Lockyer’s sentiment, adding that much of the LHC’s success comes from the powerful central organization. CERN as an organization directs all of the construction and operations, while participating European nations supply the funding. “You need to have someone who is in charge,” Orr said. But it’s a success that is difficult to replicate.

Lockyer added, “There are bad examples out there where that’s not been followed, where project management has been shown to be lacking. … You can look at the ITER project as an example.”

ITER, the international collaboration to build a giant Tokomak in the south of France, has been in development since the 1980s, but its full operation has been delayed until at least the mid 2020s. In his own talk, Robert Iotti, present chair of the ITER Council, candidly highlighted many of its shortcomings, and their root causes. “Whether the ITER model is a success or ultimately a failure has yet to be determined,” Iotti said.

He traced many of its problems to a weak central organization that wields little power to manage the contributions from the various international partners. All major decisions that would affect the cost of the project needed unanimous agreement from all seven partners, effectively giving every participating country veto power over any critical decision.

“Reaching a unanimous agreement was so important that it seemed far more important than to reach an agreement that would make the project successful,” Iotti said.

He added there had been much criticism lobbed at ITER’s “in kind” development, where each nation contributes discrete pieces of equipment to the central organization. Redesigns and late or missing contributions have been the primary time-sink in the project’s delays. A major part of the problem, he said, is that the responsibilities were divided up among the countries based on how much money each contributed, rather than which could best build a given piece.

“Contribution in kind can work if you set it up correctly,” he said. “The way that it’s been applied gives you an impression it’s the wrong model, but it can be made to work.”

It’s a similar model to what’s been successful with the International Space Station. The United States has been the leader in hosting, directing and supplying most of the project with significant hardware contributions from Russia, Canada, Japan and Europe.

International collaborations in astronomy and astrophysics are common, with the U.S. taking both leadership and support roles. Projects like the National Air and Space Administration (NASA) James Webb Space Telescope are run by NASA with international contributions, while the European Space Agency’s upcoming Jupiter Icy Moons Explorer is getting support from NASA.

However, the United States has had an uneven history leading large international particle physics projects. Fermilab’s two big detectors at the Tevatron were run as successful international projects, but such wasn’t the case for the never-built American particle accelerator that would have eclipsed the LHC.

Discussing this sad episode, physicist and historian Michael Riordan of the University of California Santa Cruz highlighted some of the shortcomings in the United States’ 1990s-era Superconducting Supercollider project. Among the many problems, the United States was never able to bring in the international investment built into the project’s planned budget.

“There was a fundamental flaw,” said Riordan. “We were expecting that we could get something on the order of 20 percent in foreign contributions for a project that was intended to reestablish American leadership.”

He added the lesson he drew from the experience is that for large projects, international partners need to be treated like real partners with real input into the project. It’s a lesson that Lockyer said he and U.S. Secretary of Energy Ernest Moniz had also drawn and hoped to apply to DUNE and future projects.