First responders: Getting the bad guys and fighting fires … as physicists 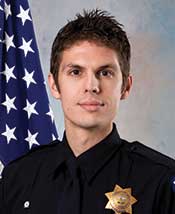 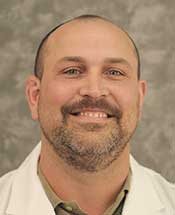 As an officer with the University of Arizona Police Department (UAPD), Andrew Lincowski spends most of his days ensuring campus safety by patrolling the streets, responding to calls, and visiting students in their dorms. But in between shifts, he pursues another passion — he is an undergraduate in physics and astronomy and plans to go to graduate school and become a theoretical astrophysicist.

Lincowski traces his love of science back only a few years. “In high school, I really wanted to do physics, but at the time, in my infinite wisdom as a teenager, I couldn’t imagine a concrete career,” he says. And so, “my science path was initially diverted.” He graduated in 2006 with a bachelor’s in accounting and immediately began working in the housing market. But when the economic crisis hit, he shifted towards law enforcement, eventually becoming a cop with the Tucson Police Department (TPD). “My goal was to become a detective as quickly as possible,” he says, with an eye towards a federal agency such as the IRS, where he could use his accounting skills to investigate financial crimes.

Never a gambling man, as he prepared for the detectives exam, Lincowski also applied to UA as a physics student. The move paid off: “I didn’t make detective eligibility, so I went back to school,” he says, and he was happier because of it. He stayed with TPD for 4 years before transferring to UAPD.

Now a senior, Lincowski is set to graduate in May 2015. He’s done quite a bit as a physics student, including completing an internship at NASA’s Goddard Space Flight Center, where he contributed to the Haystacks Project, which supports the search for habitable exoplanets by simulating telescopic planetary system images across a wide range of wavelengths. Ultimately, his efforts will improve the development of future telescopes in the search for exoplanets. He also was one of only 16 nationwide recipients of the prestigious John Mather Nobel Scholarship, offered by the National Space Grant Foundation.

Derrick Brown, a firefighter with the city of Savannah, GA, has taken a different path. Although he went to college, “It wasn’t for me,” he says. He left without graduating and eventually found his way to the Army, where he was deployed several times to the Middle East. When he returned stateside for good, he pondered his next vocational move, and got hooked on the idea of becoming a firefighter. But he knew that if he were ever to move up the ladder and pursue a position in command, he would need a bachelor’s degree. “I really wanted to get a degree that’s worthwhile that I could use,” he says. With the right major, “If I break my leg tomorrow, I would have security.”

He originally thought he’d go for engineering, but at the regional college, Armstrong State University, the only related offering was in applied physics. That was fine with Brown, who immediately became attracted to the discipline. And the more he studied it, the more he relished the many examples of applied physics he saw in action, from understanding the stratification of gases in a burning structure, to knowing how far away from a wall you can place a ladder and not have it slide. “I immediately saw why we did certain things on the job,” he says, and as a result it made him a much more perceptive firefighter.

This insight is especially critical as a first responder because, as Brown explains, “No two fires are alike.” His education has given him a deep understanding of the physics of fires and the technology used to fight them, which “helps me provide a better argument for taking certain actions” when called to serve.

The experiences of Lincowski and Brown as first responders have also greatly helped them as physics students. Lincowski reports that he has improved his time management and his ability to deal with stressful situations and conflict. “I don’t tend to be affected as much by stress,” he says. “It’s hard to be stressed about deadlines, presentations, or tests when you’ve been on the street with people who want to kill you.”

Lincowski also has honed the skill to focus on facts and ignore preconceptions. “As a police officer, I can go to a call and have to weigh my experience with certain people to know how they’ll react,” he says. “I have to use that to inform my investigations, but not at the expense of ignoring the current facts of the incident.” This extra sense of awareness has helped him as a scientist, although he also adds that he has learned not to “judge things too quickly, because they can change very quickly.”

On the other hand, his physics education has also helped him on the force. For example, he has a greater appreciation of technology used by law enforcement, such as TASERs, and he has leveraged his physics familiarity to bolster his ability to solve cases. Early on in his studies, he was taking a mechanics class where the instructor was discussing collisions between moving vehicles. Soon, Lincowski was called to testify in a lawsuit pertaining to a car accident. While up in the witness stand, “I used my physics knowledge to show that the guy had been going over 50 miles per hour in a 25 mph zone,” he says. “The lawyer said I had no knowledge of this, but I was able to refute this. … The attorney got flustered, because they were ready to throw that information out. But I had proof and showed them the math. Most police officers can’t articulate that.” In preparation for the next hearing, he worked out the equations to demonstrate that the defendant had skidded.

Brown, whose fire department also handles emergency response for vehicular collisions or illness, has developed the knack to calm people down quickly and synthesize multiple streams of information in order to make the right decision. And pursuing such a challenging subject has helped him recognize his own innate tenacity, which he never realized he possessed. “I’ve gotten my feelings hurt. Calculus 2 punched me in the nose and chemical thermodynamics was difficult because I hadn’t taken chemistry for a few years,” he shares. But “what I’ve learned from studying physics is not to quit.”

As first responders, their flexible schedules have definitely made it easier to pursue physics. Lincowski typically works four 10-hour shifts each week, which leaves him plenty of time to attend courses and present at conferences. However, when he’s on duty, his focus is completely on law enforcement. “I can’t do homework in the car,” he jokes. And although he loves identifying how physics is part of many aspects of his job, “I try not to be ‘that guy,’ who has a story for everything from class.” Brown, who works 24-hour shifts and then has 48 hours off, can do homework at the stationhouse in between fires, but the climate presents a challenge. “It’s like a frat house,” he admits with a chuckle. “I have to hide in the bathtub to do my homework.”

Lincowski is proud of the contributions he has made as a police officer. He has stymied crime rings that included identity theft and fraud and has locked up suspects on armed robbery and domestic violence charges more than once. Similarly, Brown has aided people and even animals in need. However, these victories are uncommon. “One of the reasons I am leaving law enforcement is that the moments you make a difference are few and far between,” says Lincowski. “Most times, people are booked into jail and then are out before I file my report.” And yet, “it’s nice to make a positive impact,” he adds.

Now as they approach graduation, they are both contemplating leaving their posts as first responders. Brown is interested in getting a job with an engineering firm and is currently interviewing and pursuing different career options. He was recently accepted into Medisend International’s General Richard B. Myers Veterans Biomedical Equipment Technology Program. Lincowski will head to graduate school in the fall. But one thing is clear with these men: even though they are leaving “the job” behind, it will stay with them always, as will physics. “I’m definitely a different person, studying physics now than if I had done it the first time around,” he says. As a police officer, “I see the bigger picture. I want to tie my work into good for the greater society.”

Alaina G. Levine is president of Quantum Success Solutions, a science career and professional development consulting enterprise. She can be contacted through www.alainalevine.com, or followed on twitter @AlainaGLevine.