The Art and Science of Black Holes 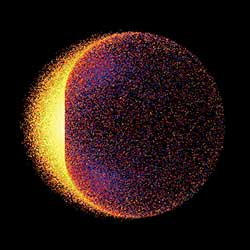 APS April Meeting 2015, Baltimore — This year’s April Meeting was swirling with black hole physics. Physicists can catch only an indirect glimpse of these spacetime singularities, so the main tools are computer calculations or observations of how black holes affect nearby matter. Among other findings on offer in Baltimore: supercomputer simulations of dark matter collisions with black holes, new additions to the black hole family tree, and predictions of what mergers between black holes and neutron stars look like. There was even a sound and light art installation produced by filmmakers and physicists at Montana State University showing a projection of matter trapped in a black hole’s fatal embrace.

Great escapes
In 1969, before Stephen Hawking developed his idea that black holes could radiate energy, Roger Penrose showed that sometimes when a particle decays into two particles near a black hole, one may fall in and the other may escape. And that escaping particle could have more energy than the original particle.

“In one fell swoop, he showed that you can get something out of a black hole and you can get a free lunch,” says Jeremy Schnittman, a physicist at NASA Goddard. But at the limit for the extra energy at about 30% that of the original particle, it isn’t very efficient. Or, rather, wasn’t. Using a simulation of a black hole — the code is called Panduratoa, named after a species of black orchid — Jeremy Schnittman showed that in some cases, the extra energy can be on the order of 600%.

Why so much more efficient? The energies of Schnittman’s colliding particles aren’t too great in the first place. “All the previous work had looked for those perfect, critical particles that just barely fall into the black hole, so they collide with the maximum possible energy,” he explains.

The energies in these so-called Penrose collisions “are not quite as impressive,” says Schnittman. But they are greater in terms of efficiency. By way of explanation, Schnittman offers the classic tortoise and the hare moral that “sometimes second best wins!”

The middle child
There are black holes that are a million, or even a billion times more massive than our sun. There are the comparatively small black holes, at a few solar masses. University of Maryland physicist Dheeraj Pasham showed off data from a rare middle-sized black hole that officially clocks in at 400 solar masses.

Pasham and his colleagues at NASA Goddard explored hot spots of gas swirling around M2-X1 using six years of archival data from the now-defunct RXTE satellite. By measuring the ratio at which hot spots at different distances from the black hole flash, the team can extrapolate its size. The key, says Pasham, was scaling up a common technique used to measure the nearby — and much brighter — stellar-mass black holes.

The small black holes form when a massive star collapses under its own gravity. But how a supermassive black hole, like the one at the center of our galaxy, forms is still a bit of a mystery. It may be that material is falling onto medium black holes. These, in turn, could result from mergers of stars in a dense star cluster, says Pasham. A mega star could quickly collapse into a black hole, so further study of the rare middle-sized object could reveal if that’s the case.

Two to tango
Short gamma ray bursts — less than two seconds — are thought to come from a spinning black hole in a magnetized gaseous disk, with twin jets of matter emanating from its sides. In the outer regions of the cloud, gamma rays and electromagnetic afterglows — X-rays, visible light, radio waves — are born.

The thinking goes that these jets are created from the magnetic field that arises from a neutron star orbiting a black hole, eventually being sucked in and swallowed up. But, “no computer simulations based on the laws of general relativity and magnetohydrodynamics have been able to form a jet [after] the neutron star merger with the black hole,” says Stuart Shapiro from the University of Illinois.

In his computer rendition, which he ran with the help of Milton Ruiz of the University of Illinois, the star and black hole fall closer together, and the black hole distorts the field and the star; the star forms a tail, and eventually a disk of magnetized matter around the black hole, with funnels jetting matter outward. “The magnetic field lines are wound up tighter and tighter. As time goes on, a funnel forms near the poles.” And then, the gamma-ray-spitting jet forms.

Fittingly, the time it takes the neutron star disk to be eaten by the black hole is about half a second. “This source lives for about as long as we see a gamma ray burst,” explains Shapiro.

Abstract: The Distribution and Annihilation of Dark Matter Around Black Holes

Abstract: A 400 solar mass black hole in the galaxy M82