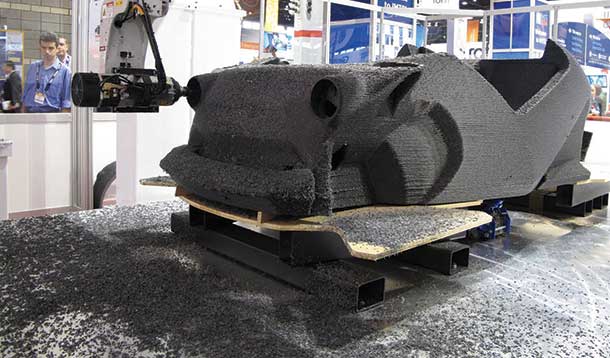 The world's first 3D-printed car is an example of the dramatic changes in manufacturing.

APS March Meeting 2015, San Antonio — Additive manufacturing, more popularly known as 3D printing, could be the future of industrial manufacturing while possibly undercutting national security, experts said at the APS March Meeting 2015. This technology was the central focus of several of the industrial physics sessions, highlighting both its commercial promise as well as its policy implications. “The early promise of the technology has been demonstrated,” said Prabhjot Singh, manager of General Electric’s Additive Manufacturing Lab.

But the same aspects that make the technology enticing for industry — its flexibility, low cost, minimal waste, and small footprint — make it potentially dangerous for global security. The streamlined manufacturing processes that can print a car’s exhaust manifold can just as easily be used to surreptitiously manufacture weapons, researchers warn.

“This is an emergent, latent, and disruptive technology for issues related to national security,” said Bruce Goodwin, associate director at large for national security policy and research at Lawrence Livermore National Laboratory. “All by itself, additive manufacturing changes everything, including defense matters.”

Additive manufacturing is a general term for a range of technologies that stack thin layers to produce an object. Though there are a variety of methods, generally a nozzle scans a surface, following instructions in a 3D “build” file, and squirts out a micron-thick filament as it builds up the object. Plastics were some of the first materials available, but recent developments opened up the process to a range of metals and ceramics as well.

In contrast, traditional subtractive manufacturing uses computer-controlled machines to carve a part out of a raw form. By working from the ground up, additive manufacturing can build solid shapes that were impossible with older manufacturing methods, while almost totally eliminating waste.

Though originally promoted as a means for rapidly prototyping products, 3D-printers are now producing the products themselves. Enterprises both large and small are now directly marketing 3D-printed products to consumers.

One of the fastest growing markets is fulfilling orders for obscure parts that would have been uneconomical to mass-produce using traditional machining. “[The] worldwide prototyping market is limited, but the important thing is manufacturing,” said Michael Cima of MIT. “The entire system was commercialized because there was a quick way to make a few key parts.”

With some improvement, the largely-automated technology promises to shrink the footprint of manufacturing. Entire machine shops staffed by a multitude of specialists could be reduced to a couple of machines overseen by a few technicians. General Electric is aggressively pushing the technology into its manufacturing lines. “We are taking the leap into industrial additive manufacturing,” Singh said. “We are starting three new facilities for the industrial use of these materials.”

Medical applications are also just starting to appear. Creating custom implants and prosthetics for patients could potentially revolutionize medical treatments. Such 3D-printed body parts are subject to the same U.S. Food and Drug Administration (FDA) regulations as devices manufactured through traditional means. Already more than 70 applications have been approved, including skull plates, spinal trusses, and even whole jawbone replacements.

The portability of smaller 3D printers, some not much bigger than a microwave oven, could help bring advanced treatments to areas underserved by the healthcare system. “Think of what that might mean for mobile hospitals, for example,” said Katherine Vorvolakos, a chemical engineer at the FDA. “Production can conceivably happen anywhere.”

However, experts caution that shrinking the footprint of manufacturing has a dark side, one with potentially global ramifications. “The downside to all of this is that it could dramatically increase [nuclear] proliferation and make it harder to detect,” Goodwin said.

Nonproliferation monitors have long used the large scale of the nuclear weapons industry to track proliferation around the world. Not only do the nuclear facilities themselves take up large areas and resources, but the manufacturing efforts to build bomb parts do as well. “Waste stream elimination eliminates one of the major indicators and warnings of proliferation,” Goodwin added. 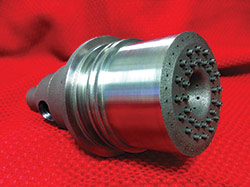 The promise of additive manufacturing also includes the peril of easy-to-make weapons, as illustrated by this 3D-printed rocket engine.

Advances in metal printing techniques like direct-metal-laser sintering could be used to fabricate a variety of weapons. Goodwin highlighted an instance where he downloaded from the Web the build file for an unnamed part to a nuclear reactor and printed it out. Using traditional fabrication methods, the part would have required 168 welds and several months of work to set up an assembly line. “We made that part out of stainless steel in about four hours,” Goodwin said. “In 15 years, this will be a nightmare.”

This has significant implications for the control of conventional weapons as well. 3D-printed handguns have made headlines already, but Goodwin said that the problem could be bigger. General Electric routinely prints aerospace-grade components for jet engines, a technology that could potentially be adopted to produce the parts to build whole jet fighter planes.

He added that digital build files, the essential data telling printers how to construct an object, shifts the problem of import control into the cyber realm, an altogether more complicated paradigm. It is difficult to completely stem the flow of digital information, potentially making it easier for an unfriendly country to simply produce a product itself in order to circumvent restrictions on the importation of banned technology, such as parts for nuclear weapons.

“The downside of this is that it could essentially eliminate the use of trade sanctions for foreign policy,” Goodwin said.

So far, no one has demonstrated a way to 3D-print fissile materials, but it’s likely there are no fundamental barriers to building a device that prints uranium or plutonium. International controls of such materials have so far prevented anyone from developing such techniques.

“Controlling the materials is the most important thing,” Goodwin said. “[But], I think you have to assume that any system of control is going to break down.”

Abstract: Historical Overview of 3-D Printing: Do inventors know what they are doing?