Reflections on the Fifth International Conference on Women in Physics 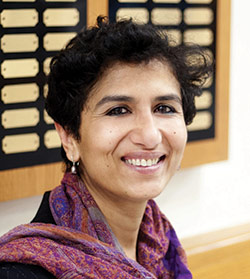 In August 2014, I attended the 5th IUPAP International Conference on Women in Physics (ICWIP 2014) in Waterloo, Canada as part of the U.S. delegation. The conference was attended by approximately 215 female physicists and a few male physicists, all from 49 different countries. There were research talks, panels, workshops, breakout sessions and posters on issues related to women in physics.

A major focus of the conference was how to address the many barriers that uniquely affect the advancement of women in physics worldwide. Barriers that were listed in the country reports included societal biases affecting women and accumulating over time from an early age, unconscious gender bias, and the effects of stereotypes. Also contributing are family responsibilities, unfriendly and unsupportive environments in physics departments, lack of mentoring, lack of a critical number of women in physics and lack of role models. Compared with other professions that women might choose, physics is perceived to be especially competitive rather than collaborative. Physicists generally do not try to explain to their students how physics helps humankind. Male physicists in some countries have a reputation for acting “macho,” leaving women physicists feeling marginalized. In some countries, e.g., in the Sudan, issues that negatively impact and limit women’s ability to begin and sustain careers in physics also include religion, economics, and politics.

In the conference workshops, we learned what social scientists have ascertained about how girls are influenced as they grow up with regard to pursuing science and mathematics. In the workshop, “Equity and education: Examining gendered stigma in science,” we learned that, while most girls are interested in science and math when they are in early grades, in countries like the U.S. many tend to step away, often because they unwittingly conform to societal gender stereotypes. Women in some countries like the U.S. are often victims of gender stereotypes from very early on, and some women are impacted so much that they even start questioning their own ability to ever be equal to or better than men in STEM fields.

Societal biases related to women not being smart enough to pursue careers in male-dominated STEM fields can impact women’s beliefs about their own capability and negatively influence whether women pursue STEM majors and how they perform in STEM courses. In some countries such as the U.S., when women don’t succeed in a science course, people often attribute it to their poor abilities; but when men do not succeed, people often attribute it to their lack of effort or poor teaching, but not to their lack of ability. This dichotomy has a negative impact on whether women who have failed once would want to pursue those subjects in the future (“failing” could even be obtaining a B or a C grade in a course for an otherwise high-achieving woman). Many women in male-dominated fields assume that small setbacks, e.g., getting one B or C grade in a physics course, are indicative of their lack of aptitude for physics. They are more likely to interpret such setbacks to imply that they are not cut out to pursue a physics-related degree and so they lose confidence. If women underperform, they are often likely to blame themselves and feel that they do not have the talent necessary for excelling in the subject in which their male counterparts seem to have an edge. In several studies, if students did not perform well in a test and were told that learning is about effort, they tried harder and did better later, but if they were told that learning is tied to innate ability, they did not try harder after they performed poorly.

Stereotype threat, e.g., directly or indirectly being reminded that women cannot do physics, can exacerbate the situation. Women become victims of stereotype threat when their performance is negatively impacted by their negative perception about the group — “women”— to which they belong. For example, just asking a woman to write her gender on the test sheet before she takes a test can act as a stereotype threat; also this can lead her to perform worse than she would otherwise. Writing her gender can act as a stereotype threat because women are already aware of the societal stereotype that women are not supposed to do as well as men in math and science. Such a threat often undermines a woman’s ability to score high on tests or other standard measures of academic achievement. Research in some western countries such as the U.S. suggests that people often perform much below their level when pressured to conform to a stereotype.

Discrimination that women physicists face in the workplace is overt in some countries and in some cases subtle, and the differences are caused by how each culture views women. Women in physics in many countries are still often made to feel that they have chosen a wrong career path. Their success is overlooked. Their opinions are often dismissed even if they are worthy of further discussions. Women physicists from many countries in Africa, Asia, and South America reported that they even have to justify why they chose physics, despite being a woman, because of the macho culture and societal norms.

The “leaky pipeline” prevents women physicists in all countries from reaching the highest levels of our profession. The amount of leakage and at what stage it occurs varies significantly from country to country. In the U.S., women’s participation in physics decreases precipitously from high school to college level and then again in the top leadership positions in physics. However, unlike the situation in many other countries, in the U.S., in the last decade, there is no leak from the undergraduate to graduate to assistant professor level in physics — the percentage of women at each of these levels has hovered around 20%.

Regardless of the country, the common theme at the conference was that women are highly underrepresented in leadership positions and decision-making roles. The overall proportion of female researchers in Estonia is over 40% and exceeds the European average, but the gender imbalance in the researcher population increases with age. Women physicists from some Asian countries, e.g., China, noted that everything was fine up to graduate school, and there was no significant barrier for women in physics until they obtained their Ph.D. After the Ph.D., there is a perception that women do not have the ability to be good physics professors, researchers, or scientific leaders, or that they should focus on their family rather than pursuing a high-profile career as a physicist. The glass ceiling was cited as a major factor why women fail to reach the top in physics across the world.

In 2012 the American Institute of Physics released the results of the Global Survey of Physicists, which was completed by 15,000 female and male physicists in 2009-2010, analyzed by regions, and restricted to 12 countries with sufficient data. Staff member Casey Tesfaye described how in nine of the analyzed countries, women had fewer opportunities than men, and in a different nine-country subset they had fewer resources than men. Regarding career progress, women with children progressed more slowly than men in eight of the analyzed countries.

Women physicists, especially, from some African countries, noted that taking an interest in physics is also perceived to diminish their feminine attributes. In fact, even in the U.S., the stereotyped portrayal of female scientists by popular media (e.g., the TV show “The Big Bang Theory”) which make them look unattractive, does not help in encouraging more young girls to pursue physics. Eileen Pollack, who wrote an opinion piece in The New York Times (October 13, 2013) about why there are so few women in science, attended this ICWIP 2014 conference as a panelist and raised the point that the paucity of women going into physics is exacerbated by the stereotyped portrayal of female scientists.

Women physicists from Iran noted that more than 60% of B.S. and M.S. students, 47% of Ph.D. students, but only 18% of faculty members in the physics departments are currently women. These high percentages of female physics students are partly because men in Iran are often more interested in engineering, because the career prospects are better. Women from Egypt noted that the reason many women do not take comparable jobs to men, even after obtaining their Ph.D., is that they want to be closer to home in order to take care of their families, so they have lower aspirations professionally in order to balance work and family.

What was clear is that in many of these non-Western countries, the women physicists have greater difficulty balancing family and work. Not only are they responsible for everything at home, but in addition, childcare and flexible work hour options are much less common in these countries. Some of these women physicists seemed resigned to the fact that they are unlikely to get an opportunity to pursue a career in physics as rewarding as the one afforded to their male counterparts because they have to find a job closer to home in order to balance work and life. In some of these countries, efforts to provide opportunities to balance work and family, and counter-biases that exacerbate the difficulties, are impossible to even dream of at this time.

Even in western countries female physicists face challenges. The German contingent discussed data suggesting that female physicists’ professional competence and accomplishments are less appreciated, and that parenthood affects their education and career distinctly more strongly than those of their male counterparts. Physicists from Finland (where the first female professor of physics was hired in 2004 at the University of Helsinki) noted that cultural reasons were central for understanding the gendered-career-segregation processes. For example, they noted that many major decisions are made in men-only saunas, which automatically excludes women physicists.

The good news is that in many countries, in the science and engineering departments where women are underrepresented, there is more awareness that there may be implicit and explicit biases that partly account for the underrepresentation of women. There is also more awareness that more effort should be devoted to recruit and retain talented women to ensure that everybody has an opportunity to contribute to the vitality of these disciplines.

Chandralekha Singh, is a Professor in the Department of Physics and Astronomy at the University of Pittsburgh and Founding Director of the Discipline Based Science Education Research Center (dB-SERC). She served in the Chair line of the APS Forum on Education 2009-2013.