Smartphones in the Classroom Help Students See Inside the Black Box 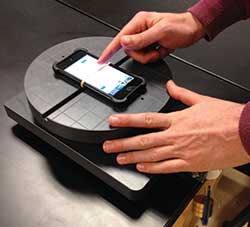 Cell phones have proliferated among high school and college students, and these pocket-size computers have become essential tools in physics classrooms. Sporting a range of sensors, smartphones offer educators and students a familiar device that can perform many of the same functions as expensive lab equipment. However, advocates of smartphones in the lab are also stressing the need to teach students how phone sensors work in order to properly interpret their results.

“Ironically, nearly all students walk into [physics] laboratories in possession of a personal device with many — if not all — of the data collection capabilities they need: their smartphones,” said Colleen Lanz Countryman, a physics education Ph.D. student and physics lab instructor at North Carolina State University.

Most smartphones today come equipped with internal sensors that can measure acceleration, orientation, audio volume, light density, and even magnetic field strength. Smartphone apps like SensorLog and AndroSensor can record and store data from the sensors for further analysis.

Lanz Countryman observes that limited funding is pushing teachers to think twice about investing in expensive lab equipment, and that smartphones may help fill the gap. She notes that, “In the past few years … I have noticed an increase in curiosity regarding the utilization of smartphones in labs.” In the classroom, Lanz Countryman has observed that smartphone labs “spark initial excitement” among students who are curious to discover “unknown capabilities of their own devices.”

Physics teachers and education researchers commonly believe that students learn a physics concept more deeply if it is explored experimentally with familiar everyday tools. “Results of pilot studies in physics (both high school and university level) show that using such devices as experimental tools could foster conceptual learning,” said physics education researchers Jochen Kuhn and Patrik Vogt in an email. Kuhn and Vogt are also the editors of iPhysicsLabs, a column dedicated to smartphone physics in The Physics Teacher journal.

But the smartphone can become another black box in the lab. Recently Lanz Countryman wrote an article (1) for The Physics Teacher in which she highlighted the need for students to understand how their phones actually measure physical quantities. She noted that a “common ‛tripping point’ for students” is the fact that a stationary smartphone displays an acceleration of 9.8 m/s2. By describing the internal acceleration sensor as a suspended test mass, a teacher can help students understand this measurement.

The adoption of smartphones in the classroom has been growing over the past few years, and in 2012 The Physics Teacher started the iPhysicsLab column in order to highlight their use in introductory physics labs. The first article, by Kuhn and Vogt, described a simple way to study free fall and gravity by dropping a smartphone onto a cushion and recording data during the fall. Since then iPhysicsLab has featured a range of smartphone experiments, including measuring the speed of sound in a pipe, analyzing pendulum motion and decay, and even testing the laws of radioactivity with a smartphone camera sensor.

Once students have been introduced to a data collection app, some naturally take it out of the classroom. “In a self-reported survey, some students admitted to using the apps while skateboarding down a hill and riding in an elevator,” said Lanz Countryman. Kuhn and Vogt have also described outdoor experiments on swings and amusement parks in the European Journal of Physics Education (EJPE) as well as in a variety of iPhysicsLabs columns.

Smartphone-aided physics education is still relatively new, and Kuhn, Vogt, and Lanz Countryman are among the few researchers studying the impact of smartphones on student learning. Since 2010, Kuhn and Vogt have surveyed groups of both high school and undergraduate physics students and found that the groups using smartphones as experimental tools seem to have a greater sense of independence in the lab and a better conceptual understanding of physics; part of this work appeared in the EJPE early this year (2) and will appear in greater detail in a new book entitled Multidisciplinary Research on Teaching and Learning to be published by Palgrave Macmillan in April.

On the technical side, smartphone apps may soon be capable of much more. “The data collection apps currently available are only in their infancy,” said Lanz Countryman. More creative and user-friendly data collection apps are sure to follow as interest within the physics teaching community grows.