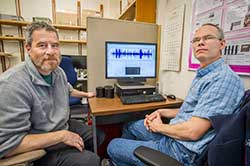 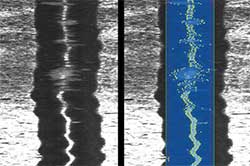 Grooves in flat disc recordings encode sound in side-to-side oscillations (left) which can be mapped with software algorithms (right).

In the early 2000s, Carl Haber was quietly pursuing precision measurement projects at Lawrence Berkeley National Laboratory. An experimental particle physicist, he was spending most of his time designing and building optical devices to measure the telltale trajectories of particles as part of the ATLAS experiment at the Large Hadron Collider at CERN. The story goes that Haber had an epiphany while stuck in Bay Area gridlock listening to a radio interview with Grateful Dead drummer Mickey Hart.

Hart is an ethnomusicologist and recording preservation expert. He was explaining his frustration with handling and archiving old, delicate sound recordings recorded with obsolete technology. Listening to these relics today would be like trying to play eight-track tapes with your iPod.

“That was the moment I saw this connection between optical metrology and recordings,” says Haber. Perhaps, he reckoned, some of the precision optical tools his team was using to analyze and construct the particle trackers could also be used to measure and image the sound recorded in the grooves on wax cylinders, foils, and other early recording mechanisms used since the 1800s.

Haber began exploring the topic of music preservation and the tools being used to listen to older recordings. “I started discussing the issue with Vitaliy Fadeyev, who was a postdoc working in our group on ATLAS,” he recounts. Fadeyev was also very experienced with optical metrology, and in October of 2002, he tried an experiment to scan just a bit of a phonograph record he and Haber had been looking at, using one of the tools they had in the lab. “He showed that the process could work in principle,” says Haber. “We then wrote a paper about this together and sent it to folks at the Library of Congress.” The idea was “to acquire digital maps of the surface of the media, without contact, and then apply image analysis methods to recover the audio data and reduce noise,” he writes on his website dedicated to the project (irene.lbl.gov). The Library liked the proposal and provided seed funding.

In collaboration with his colleague Earl Cornell, a nuclear physicist who joined the project in 2004, Haber used the financial support to develop different scanning systems to recover audio tracks from the two grooved media — discs and cylinders — utilized in early recordings. Their first device, which they dubbed Image, Reconstruct, Erase Noise, Etc. (IRENE), creates 2 D images of the discs (with grooves cut by a stylus that moved side-to-side) with microphotography. For cylinders (where the grooves were made by a stylus that moved in and out of the surface), they repurposed a confocal microscope to obtain better, more detailed images of the media in three dimensions, which microphotography could not do. Cornell created an extensive software package to analyze the data and handle the diverse formats and conditions of these media.

The technology that Haber and Cornell developed quickly became a game-changer in audio preservation. Not only did it enable sound from the earliest known recordings (made over 150 years ago) to be extracted and heard from extremely delicate media, but it also can help fix scratched or broken media. As they used it to rebuild sounds from the old media, they discovered a few surprises. They were able to hear the earliest known recording of Alexander Graham Bell and his collaborators. “One recording came from Bell’s lab, and it was really clear they were testing stuff and something didn’t work and they used a profanity,” chuckles Haber. “It is one of the worst words in the English language.”

The staff of the Museum of Science and Innovation in Schenectady, NY, heard about their efforts and approached them with early recordings made by a machine that Thomas Edison had built. The sounds had been recorded on embossed foil, and then wrapped around a cylinder for playback. But the foil had been folded and stored in an envelope, and by the time the team got hold of it, much of it was shredded. Still, using their device, they were able to transfer the sound to a digital file. The recording was originally made in June 1878.

“The history contained in these artifacts is interesting and we don’t know how long they’ll last,” says Cornell. “Having digital representation is important … and it is [amazing] to hear Alexander Graham Bell’s voice.”

The Library of Congress partnership led to financial arrangements with the National Endowment for the Humanities, the National Archives, and the Smithsonian Institution. And in 2013 Haber was awarded a MacArthur Fellowship, which will provide his team $125,000 of unrestricted funds annually for five years.

So far, Haber and Cornell have built five systems, which are installed at Berkeley Lab, the Library of Congress, the National Audio-Visual Conservation Center (part of the Library of Congress), the Northeast Document Conservation Center in Andover, Massachusetts, and the Roja Muthiah Research Library in Chennai, India. “We could see a need for more machines here in the U.S., Canada, and elsewhere,” says Cornell. The MacArthur Fellowship “helps us spread the word about the applications of physics to the humanities,” adds Haber. “It also gives us a little more wiggle room, but for the project to be healthy, we need more funding.”

Haber and Cornell are expanding their work to include reproducing “field recordings,” which were made in the nineteenth century and the beginning of the twentieth century by ethnographers, anthropologists, and linguists who studied indigenous cultures. “These were cultures that were changing because of modernization,” describes Haber, and scientists made thousands of recordings of people discussing their experiences and cultures, always in their native languages. “We are able to move them into this accessible regime,” he continues, which allows modern ethnographers to listen and examine Native American languages, some of which are either dying or are no longer spoken at all. The recordings are additionally being used to promote language revitalization. The researchers are also reaching out to Europe, where there is a “huge, untapped repository of historic recorded sound,” says Haber. “We would love to get a foothold in the EU and present solutions for European archives.”

A nice benefit of their collaboration is that it has contributed to physics research. “Some of the techniques we’ve developed we have sent back to particle physics,” says Haber, such as the ability to do large-scale scanning. Their solution will be integrated into the large-scale fabrication and precision inspection needs of the major upgrade of ATLAS that is planned for operation in the mid-2020s. But ultimately, they are strongly motivated by the desire to do good for society. “We very much believe that the methods and approaches of the physical sciences and the rest of the STEM fields [science, technology, engineering and math] and have a tremendous amount to offer the world across a variety of disciplines and problems,” says Haber. “Society supports blue-sky research, and if we can give back to show how STEM fields benefit other fields, like humanities, it is important.”

Alaina G. Levine is president of Quantum Success Solutions, a science career and professional development consulting enterprise. She can be contacted through www.alainalevine.com