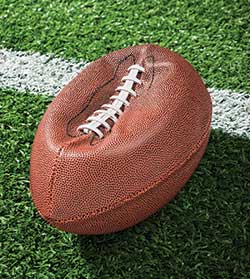 Just weeks before fans settled in for the U.S. National Football League’s Super Bowl game, physicists made headlines in the sports pages as the world was transfixed by the mystery of underinflated footballs. Scientists willing to weigh in on the burgeoning “DeflateGate” controversy were highly sought after in the news media, but even some of the country’s top science communicators tripped up early on.

The controversy started on January 18, 2015, when Indianapolis Colts linebacker D’Qwell Jackson reported that the ball he intercepted during the American Football Conference championship seemed soft. After the game, the NFL announced that it found that eleven of the twelve footballs handled by the New England Patriots were underinflated by as much as almost two pounds per square inch, though it came out later that most were only off by a fraction of one psi.

Cheating allegations against the Patriots flew. NFL lawyers approached Columbia University experts, while numerous scientists weighed in publicly on the pressure inside the cold footballs.

In a series of hastily-put-together news conferences, New England Patriots coach Bill Belichick denied any impropriety and said that rubbing the balls coupled with the day’s cold weather could have caused the change in pressure. “Bill’s press conference was a little confusing, to put it mildly,” said Timothy Gay, physics professor at the University of Nebraska and author of the book The Physics of Football.

For science communicators, it was an opportunity to use football to talk about some of the science in sports. “I was very glad about it,” said Ainissa Ramirez, a science communicator and co-author of the book Newton’s Football. “Even though I knew in my heart it was a science story, I was glad it was under the guise of football.” She wrote up a post for her blog about the emerging controversy with a back-of-the-envelope calculation as soon as news broke. And Chad Orzel, a physics professor at Union College in Schenectady, NY, was asked by his school’s communications department to weigh in on his popular blog.

“My initial reaction is ‘I’m really busy’,” Orzel said. After some convincing, he had the athletics department send over a few footballs and he stuck them in the freezer for an impromptu experiment. “I was surprised that there wasn’t more of that … it’s so easy to do the experiment.”

His initial conclusion was that the change in temperatures alone between the locker room and the rainy playing field wouldn’t be enough to account for the measured difference in pressure.

Other high-profile science communicators echoed Orzel’s sentiments as well. Neil deGrasse Tyson, director of the Hayden Planetarium, tweeted that “For the Patriots to blame a change in temperature for 15% lower-pressures, requires balls to be inflated with 125-degree air.”

Bill Nye “the Science Guy” took to the television program Good Morning America and called out Belichick, saying “to really change the pressure you need one of these,” while holding an air pump, adding that atmospheric pressure changes wouldn’t be enough to change the ball’s pressure by up to two psi.

“A lot of people came out and didn’t really use the equation correctly. They forgot to convert the pressure into absolute pressure, so they were using gauge pressure, not absolute pressure,” said Thomas Healy, a graduate student at Carnegie Mellon and researcher at HeadSmart Labs.

When word of this misconception spread, a number of scientists had to go back and revise earlier calculations. Tyson ultimately released a retraction of his earlier tweet. “I made that mistake too,” Ramirez said. Orzel added that it was a common misconception that was likely compounded by years of word problems in school that overly simplify what gauges really do.

On January 29, the New York Times ran an article highlighting the misconceptions of the ideal gas law. It also covered the experiments of Healy at HeadSmart Labs, which seemed to exonerate the Patriots. HeadSmart primarily focuses on developing sports equipment to prevent concussions, but Healy and his team had redirected their investigations to football air pressure. “What our research brought in was you can’t only look at the temperature, you have to bring in the fact that it was raining,” Healy said. “Our hypothesis was that when leather gets wet, it starts to expand some, which increases the volume and decreases the pressure.”

Healy and his team did their best to recreate the changes in temperature and moisture the ball underwent from the warm locker room to the cold rainy field. They soaked the footballs in water with a damp rag and stored them in a 50-degree room for about two hours. “In that time we saw that there was an on average 1.8 psi drop in the footballs,” Healy said.

Timothy Gay gives the work a thumbs up. “The one credible experiment I saw done was by [Healy],” Gay said.

For the scientists participating in the public discussion, the focus on ball pressure was a chance to talk about science in a context where it often doesn’t come up.

“Every now and again physics stories come around, and it’s always nice to see stories about physics showing up in the media,” Orzel said. “This is one of the sillier ways to see it show up. It’s also one of the more bizarre sports scandals that I’ve seen pop up in the last few years.”

However, others saw it as an incomplete discussion. Martin Schmaltz of Boston University spoke to the Boston.com, Fox News, and a Minnesota National Public Radio affiliate. He was somewhat disappointed with the coverage, saying that most of his interviews with journalists were about how he felt about Belichick “behaving as if he’s a scientist,” rather than the science itself.

“They’re afraid to touch the science really,” Schmaltz said. “I could not get the journalist to actually write down the equation himself.”

He added that he had become involved in part also because he had seen other journalists confusing weight with pressure measured in pounds per square inch. “I thought it would be nice to see a little more science applied to everyday discourse between people on the street and in newspapers,” Schmaltz said.

Ramirez saw it as a call to action for more scientists to take advantage of news events like this to bring science to the public. She added that she was disappointed that more scientific societies didn’t post anything to their homepages or offer up experts. She said also that she hoped scientists could react more quickly next time a science question bubbled up. “These news science hooks are going to happen more frequently,” she said.