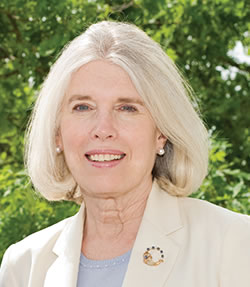 The newly-restructured APS Board of Directors voted on December 15 to select Kate Kirby as the first chief executive officer (CEO) of APS effective February 2. The appointment was announced on February 5 by 2015 APS President Samuel Aronson in an email to APS members and staff.

“I am honored to be appointed as the first CEO of APS, managing the operations of the Society, and partnering with the elected leadership during this exciting time,” Kirby said. “I am deeply committed to the success of APS in all its many facets.”

In November 2015, APS members approved and the APS Council adopted sweeping changes to the APS governance structure. The changes included reconstitution of the APS Council and Executive Board as the new Council of Representatives and Board of Directors. The restructuring also created the new CEO position in charge of all aspects of Society operations.

Before coming to APS, Kirby served as senior research physicist and associate director of the Harvard-Smithsonian Center for Astrophysics (1988-2001), heading the Atomic and Molecular Physics Division. From 2001 to 2008, she served as director of the NSF-funded Institute for Theoretical Atomic, Molecular and Optical Physics (ITAMP) at Harvard-Smithsonian. She earned her bachelor’s degree in chemistry and physics from Harvard and her Ph.D. from the University of Chicago. Kirby is a fellow of both APS and the American Association for the Advancement of Science.

“Because of her experience and the trust that members, staff, and leadership have in her, we enthusiastically recommended to the new APS Board of Directors that Kate Kirby be hired as the first CEO to quickly and smoothly implement the transition to our new governance and executive structure before we turn our attention to the longer term,” said APS Past President Michael Turner, chair of the CEO “pre-search” committee.

The Board acted on the recommendations of the pre-search committee, which called on APS to finalize its new leadership as quickly as possible. This was a shift from the original transition plan, which outlined a longer process involving a wide search for potential CEO candidates. “The committee made a very compelling case,” said Aronson.

He added that it was important to have someone head the organization who knows its culture and how it works. In addition, with the role of CEO filled, it would help expedite the searches to fill senior staff positions, such as publisher and chief financial officer. The Board’s vote to adopt the committee’s recommendations was unanimous. “She’s the right person at the right time for this job. We’re fortunate that she is serving as APS’s first CEO,” Aronson noted.