Historic Preservation for the Atomic Age 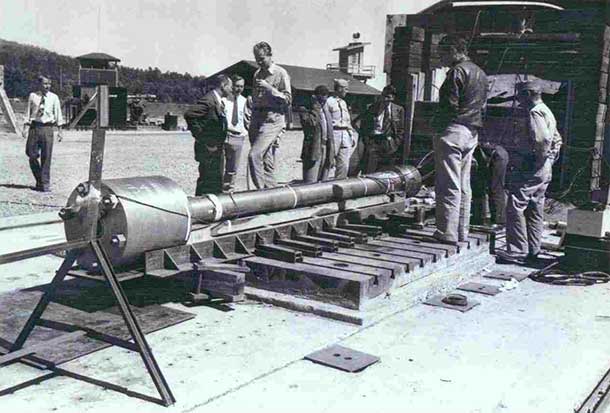 The "Gun Site" at Los Alamos National Laboratory where the first atomic bomb dropped on Japan was assembled.

When President Obama signed the National Defense Authorization Act on December 19, 2014, it included a provision to establish a National Historic Park commemorating the Manhattan Project at sites in New Mexico, Tennessee, and Washington State. The Department of Energy (DOE), which owns and manages the sites, is now working with the Department of the Interior to create a plan to set up and administer the first historic park devoted to the effort to build the first atomic bomb.

“The first step in the process to create the National Historic Park is for the National Park Service [NPS] and DOE to develop an interagency agreement that spells out our roles and responsibilities,” said Victor Knox, NPS associate director of park planning, who is heading the effort. “The park doesn’t actually exist until the agreement is complete.”

“The Department looks forward to partnering with the National Park Service to tell the story of one of the most significant events in 20th century American history to a wider audience,” said David Klaus, the deputy secretary for management and performance at the Department of Energy.

The recent legislation sets aside historic buildings in Los Alamos, Oak Ridge, and Hanford for the Park Service to preserve and convert into museums and interpretive centers that present the history of the atomic bomb. But safety and security concerns present unique obstacles to the creation of the park.

“The Department of Energy has a high concern for protecting our nuclear installations, and that’s also a great concern of ours, but they’re the experts,” Knox said. “That’s different from what we’ve worked on in the past.”

Los Alamos and Oak Ridge are still high-security areas that develop and store the nation’s nuclear weapons. Hanford is a superfund site (a particularly-toxic waste site), which is the focus of the largest environmental cleanup in the country.

Several of the sites already have some public access. Hanford offers limited public tours, which include the B Reactor, the site of plutonium production for the “Fat Man” bomb dropped on Nagasaki, Japan. Oak Ridge runs a bus tour that includes the old X-10 graphite reactor that produced some of the Manhattan project’s earliest plutonium samples, as well as the site of the former K-25 gaseous diffusion plant for uranium. Although Los Alamos National Laboratory currently has no public access, there are several historic buildings in the nearby town that are open to the public, including J. Robert Oppenheimer’s old house.

“The sticky question that they have to address in the next year is public access, because many of the sites are behind security fences,” said Cynthia Kelly, founder and president of the Atomic Heritage Foundation (AHF), which has been pushing for the creation of the park.

The legislation sets aside numerous properties at the three labs, including the B reactor at Hanford, the X-10 reactor and the K-25 site at Oak Ridge, and the Oppenheimer house and about 17 buildings in the National Historic Landmark District in Los Alamos. These include the V-Site where the Trinity bomb was assembled, the Gun Site where the Little Boy bomb was built and tested, as well as the so-called Slotin Building, which was the site of the criticality accident that claimed the life of physicist Louis Slotin. The park is still in the early stages of planning, with DOE and NPS holding their first meetings in mid-February. The legislation says that they have until December 19 of this year to come up with an agreement. “We’re very optimistic we can make that date,” Knox said. “We do hope that there will be some additional enhanced public access we can put in place before the agreement’s done.”

Once the agreement is in place, the two agencies will develop a general management plan that will address the more specific logistics of park operation. “That type of planning will be useful to create the vision for what is the appropriate public use, what’s safe and what benefits the public, and where else … we put our energies in interpreting the park,” Knox said. “We need to develop that in cooperation with the communities.”

In addition to lobbying for the creation of the park, Kelly and the AHF have been publishing information about the sites and the history of the project for years. The organization produced five guidebooks, more than a dozen short films about the sites, and a smartphone “Ranger in Your Pocket” app for virtual tours of the site. In addition, the Foundation partnered with the Los Alamos Historical Society to produce, collect, and archive hundreds of oral histories from people connected with the Manhattan Project over the years. “We are going to be as helpful as we can. We have very good relationships with the Park Service,” Kelly said.

As the design of the park moves forward, Knox said he hopes to incorporate the work of the Foundation. “They’ve put together some really great interpretative materials that will be of huge assistance to the National Park Service,” Knox said. “We don’t have to start from scratch.”