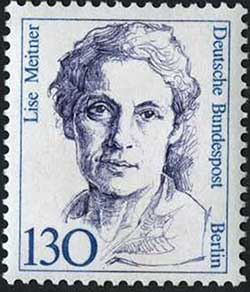 Women have made substantial progress in physics, accounting for 20% of all Ph.D.s awarded in 2012. Yet only two women have won the Nobel Prize in Physics since it was established in 1895: Marie Curie in 1903, and Maria Goeppert-Mayer in 1963. Among those most often cited as having been unfairly overlooked is Lise Meitner, whom Albert Einstein once called the “German Marie Curie.”

Born in 1878, Elise (she later shortened her name to Lise) was the third of eight children born to a Jewish lawyer, Philipp Meitner, and his wife Hedwig. She studied physics privately, with the support of her parents, since public universities in Germany at the time did not admit women. That education nonetheless proved sufficient to pass the requisite examination in 1901, and in 1905 she became just the second woman to earn a doctoral degree from the University of Vienna.

Her best local job prospect was to work in a gas lamp factory, but this did not appeal to Meitner, and she moved to Berlin with her father’s blessing (and funding), where she won the favor of Max Planck — notoriously reluctant to teach women — and eventually became his laboratory assistant. Here she began her longtime collaboration with chemist Otto Hahn; together they discovered several new isotopes. She moved with Hahn to the Kaiser Wilhelm Institute in 1912, initially working without pay. In 1917, the Institute granted Meitner her own physics lab. She briefly served as a nurse during World War I, but soon returned to her research in Berlin, although not without some pangs of guilt for not doing more for the war effort.

In 1923, Meitner pinpointed the cause of a strange emission of electrons from excited atoms, although the phenomenon is now known as the Auger effect, after French scientist Pierre Auger, who independently discovered it that same year. She became the first woman in Germany to hold a full professorship when she moved to the University of Berlin in 1926 to head a research program in nuclear physics.

It was an exciting time for physics, given the discovery of the neutron in the early 1930s, which launched a four-way international quest to create an element heavier than uranium in the laboratory. The competitors: Ernest Rutherford in England, Irene Joliot-Curie in France, Enrico Fermi in Italy, and Meitner and Hahn in Germany.

When Adolf Hitler rose to power in 1933, most Jewish scientists fled Germany, including Meitner’s own nephew, Otto Frisch. Meitner, however, remained behind at the Institute for Chemistry until 1938, a decision she later regretted: “It was not only stupid, but also very wrong that I did not leave at once.” Her Austrian citizenship provided some protection, but eventually Meitner, too, was forced to flee the country, with the help of Dutch physicists. She had just ten German marks to her name, along with a diamond ring given to her by Hahn, in case she needed to bribe the border guards.

Despite her own reluctance to leave Nazi Germany, Meitner was fiercely critical of the other prominent scientists who remained behind, including Hahn — to whom she wrote a blistering rebuke many years later, despite their lifelong professional collaboration and friendship — and Werner Heisenberg, who led the Nazi development effort for an atomic bomb. “Heisenberg and many millions with him should be forced to see these camps and the martyred people,” she wrote.

Meitner found herself working with Niels Bohr in Stockholm, Sweden, continuing her collaboration with Hahn via mail. The two even managed to meet secretly in Copenhagen to plan a new series of experiments. Hahn successfully performed the experiments with Fritz Strassmann in Berlin, but he wrote to Meitner that he was mystified by the fact that bombarding the uranium target with neutrons actually produced lighter elements. “Perhaps you can come up with some sort of fantastic explanation,” he wrote. Meitner and Frisch did just that, invoking a theory of nuclear fission that utilized the liquid drop model to explain how a uranium nucleus could split, with the reduction in nuclear mass appearing as the energy released.

They published their conclusions on February 11, 1939. However, when Hahn published his results in Nature in January 1939, he failed to list Meitner as a co-author — a controversial decision, especially since he never corrected the omission after the war ended. Hahn won the 1944 Nobel Prize in Chemistry for this work; Meitner’s contribution went unrecognized. In 1997, Physics Today concluded that this omission constitutes “a rare instance in which personal negative opinions apparently led to the exclusion of a deserving scientist” in the awarding of the Nobel.

The discovery of nuclear fission (a term coined by Frisch), Meitner later recalled, “opened up a new era in human history” — one that would ultimately lead to a nuclear bomb. Meitner herself flatly refused to work on the Manhattan Project: “I will have nothing to do with a bomb.”

Although the Nobel prize eluded her — she was nominated three times — Meitner received many other academic honors over the course of her long life, including several honorary doctorates and (ironically) the German Chemical Society’s Otto Hahn Prize. An element (#109, meitnerium) is named after her, along with an asteroid and craters on the moon and Venus.

Meitner never returned to Germany. She continued to travel and lecture regularly even after retiring to England in 1960. But her health was declining: she suffered a heart attack and accompanying atherosclerosis, exacerbated by a series of small strokes and a fall that broke her hip. She died on October 27, 1968 at 89, and was buried near her younger brother, Walter, in Bramley, Hampshire. Her epitaph, composed by Frisch, simply reads: “Lise Meitner: a physicist who never lost her humanity.”