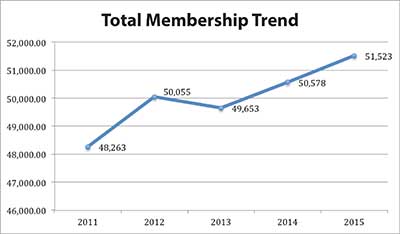 APS hit a new annual membership record at the beginning of 2015, with students and early career members making up much of the increase. After completing its count, APS Membership announced that the Society reached 51,523 total members, up 945 over last year. This continues a general upward trend over the last five years.

Trish Lettieri, the membership director of APS, credited much of the increase to efforts to recruit and retain more students and early career physicists. “The number of paying students went up by more than 1000,” she said. “We’re retaining more students by offering them more that’s relevant to them.”

She added that efforts, like the new Local Links networking groups and an increased focus on student events at meetings, seem to be working. “We’re paying more attention to our students and early career members and helping them more at this stage in their career,” Lettieri said. “I think there are interesting events and activities for them at our meetings.”

Recent changes to the membership dues structure seem also to have helped retain early career members. They can now get up to five years at the discounted rate, instead of just three years. “I think that may have helped us hold onto some of our early career members because it added two years of eligibility at that lower fee,” Lettieri said.

Lettieri added also that, over the next few years, she expects to see the number of regular members increase as students and early career members stay on and then become regular members.