IYL 2015 Switches On in the City of Light 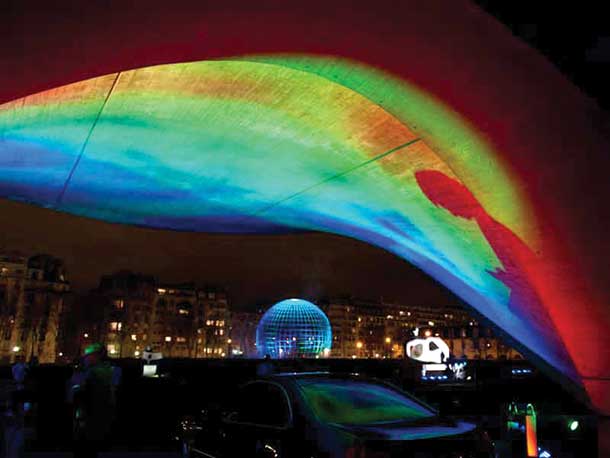 One of several IYL art installations featuring the use of light at UNESCO headquarters. 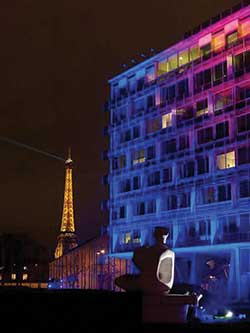 UNESCO headquarters and the Eiffel Tower in Paris.

APS is a founding partner of the International Year of Light and Light-based Technologies (IYL 2015), a year-long, global outreach effort of more than 100 scientific societies to communicate the importance of light, optics, and photonics to the world. Along with the other U.S. founding partners, the Society is collaborating on light-themed events and programs throughout the year and beyond.

“The idea is to celebrate the scientific discoveries that have been made over the years in light,” said Becky Thompson, head of outreach for APS. “We also want to inform people about the importance of light and light-based technologies in developing nations, and in education and research.”

Established and organized globally by the United Nations Educational, Scientific and Cultural Organization (UNESCO), the IYL is sponsoring and promoting thousands of events across the globe from scientific conferences and talks to art installations and festivals. Other U.S. founding partners include the Optical Society of America, SPIE, the American Institute of Physics, and the IEEE Photonics Society.

“It’s about outreach and making people aware how light-based technologies are used on a day-to-day basis,” said Dalma Novak, president of the IEEE Photonics Society. “This is a unique opportunity to [communicate] the global perspective as well.”

The year-long effort officially kicked off at the UNESCO headquarters in Paris on January 19, 2015. The two-day event brought together diplomats, politicians, Nobel laureates, CEOs, and science and industry leaders. Already more than 400 events from around the world have been listed on the IYL’s main website, including more than 50 in the United States, with more added all the time.

“All these ... events will touch on the wider aspects of the year,” said John Dudley, the steering committee chair of IYL and head of the optoelectronics and photonics research group at the University of Franche-Comte. “One important aspect of the International Year is to raise awareness among our own community of the bigger picture of optical science.”

APS is spearheading a number of programs and activities for both its members and the general public. The Society is making ten seminal research papers about light and light technologies free to download for anyone. In addition, sessions focused on light will be held at its various scientific meetings and its outreach efforts will be similarly light-themed and branded under the IYL umbrella.

Thompson added, “We’re also working with NSF and the other U.S. founding partners to put on an event in the fall. In the morning, an educational science fair maker-space, where participants can see and try out new technologies for all kinds of projects; in the evening, technical talks will highlight the frontiers of light technology.” The event’s details are still being worked out but should be finalized soon.

Other societies are also working to raise awareness about light and light technology. SPIE, an international society of optics and photonics, recently announced the winners of a photography contest it held last year to get the word out about the IYL. In addition, this year SPIE is sponsoring a number of educational kits for science teachers to learn about light sciences at several education conferences. They’re also supporting a number of the installations at the Paris opening ceremony and exhibits around the world.

“We’ve put together two separate sets of display panels and exhibits,” said Krisinda Plenkovich, SPIE’s director of education and community services. The ready-made displays featuring information on light and light technologies will be available for any organization or event to purchase and set up. One set of displays will be targeted at the tech community and carry more technical information than the one aimed at a broader audience. “For the general public the things are microscopes, lasers, and rainbows to talk about diffraction … [and] more general topics.”

IEEE is likewise helping to sponsor the Paris event and will be highlighting some of the humanitarian aspects of light technology. It is partnering with SolarAid, a nonprofit organization that distributes solar lamps in the developing world in hopes of eliminating the kerosene lamp by 2020. They are also partnering with the Stevens Institute of Technology to fund a model solar house for the Solar Decathlon competition, which highlights energy-efficient design.

APS is also highlighting some of light’s humanitarian applications. It is partnering with organizations like Liter of Light and Foldscope to promote simple and low-cost technologies that can be used to better the lives of people around the world. This effort is to help spread some of these techniques and technologies, as well as to promote their importance to researchers in the United States. “I hope they take away a better understanding of the importance to developing nations of light-based technologies that we take for granted,” Thompson said.

The year’s theme of light was chosen because of its importance to a wide range of technologies and scientific fields. “We’re not doing this just to promote physics; light science is so crosscutting it touches on biology and chemistry as well,” Dudley said. “2015 is an interesting choice of years, it’s a conjunction of different anniversaries.”

He added that 1,000 years ago Ibn al-Haytham formulated the first theories on optics, 200 years ago Augustin-Jean Fresnel applied the wave theory of light to optics, 150 years ago James Clerk Maxwell developed the theory of electromagnetic waves, 100 years ago Einstein developed his theory of general relativity, and 50 years ago Penzias and Wilson discovered the cosmic microwave background radiation. “Because of those anniversaries, it’s a great reason to celebrate light and light technology,” Thompson said.