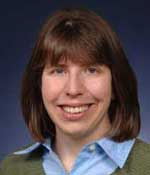 This year, the APS Maria Goeppert-Mayer Award was presented to Gretchen Campbell of the National Institute of Standards and Technology (NIST). The award recognizes outstanding achievement by a woman physicist in the early years of her career. The award is named after German-American physicist Maria Goeppert-Mayer, the second woman to win a Nobel Prize in Physics (after Marie Curie).

In addition to a certificate honoring her achievement, Campbell will receive a $2,500 stipend plus $4,000 in travel funds for giving lectures at up to four U.S. universities and at an APS meeting.

Campbell is a Fellow at the Joint Quantum Institute (JQI), a collaboration between NIST and the University of Maryland. She is an atomic, molecular, and optical physicist who specializes in Bose-Einstein condensates (BECs). “I’m definitely an experimentalist and I really love ultracold experiments. They are tabletop [experiments] but you get to do all kinds of things with them,” Campbell said. “It’s a pretty neat system that’s behaving in a quantum way but it’s a pretty big system.”

In particular, she pioneered work that uses a ring-shaped condensate to better understand superfluidity and superconductivity in BECs. “In many ways it behaves similar to a superconductor,” Campbell said.

Campbell hails originally from western New York state and first became interested in physics while in high school. “I was very much a kind of animal person as a kid,” she said. “From a very young age I was pretty convinced I was going to be a vet.”

It was during her freshmen physics class that she was drawn to the reasoning of physics as opposed to the rote memorization she encountered in biology. She was also encouraged by teachers who shared with her their own enthusiasm for science.

“Both the instructor and the lab instructor were really dynamic,” Campbell said.

“I found it challenging in a way that I didn’t find other classes. … I really enjoyed the challenge and the problem-solving aspects of it.”

She majored in physics at Wellesley College then attended the Massachusetts Institute of Technology for her Ph.D. There she did her first experiments with BECs in optical lattices. Afterwards, she won a National Research Council postdoctoral fellowship to work at JILA in Boulder, Colorado. In 2009, she joined the JQI.

The sodium BEC rings she’s been studying are essentially superfluid “atom circuits.” Campbell has been working on her current experiment to study the analog of how currents of atoms flow in these systems, much like electric currents in superconductors. The hope is to understand how to make the first practical “atomtronic” devices. Also, she hopes to use some of the prize money to develop a second experiment.

She added also that she was excited to win and looked forward to traveling to other institutions to talk about her work. “It’s definitely an honor and it’s very exciting to win an award, especially considering the people who’ve won it in the past,” Campbell said.