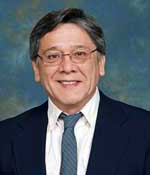 This year, Jorge Lopez of the University of Texas at El Paso received the APS Edward A. Bouchet Award. The award honors the work of underrepresented minorities in physics by identifying and recognizing a distinguished minority physicist who has made significant contributions to the field of physics. Lopez will receive a stipend of $3,500 plus travel support to attend an APS meeting to deliver a presentation about his work.

Lopez has been a long-time nuclear physics researcher and has pioneered work in heavy-ion collision dynamics and nuclear fragmentation. In addition, he has worked tirelessly to build bridges to Latin America and connect with the Hispanic community in general.

Jorge Lopez remembers first getting hooked on science at a young age. “I did a lot of small science experiments when I was in elementary school,” Lopez said. “I just lost the fear of science.” It didn’t take long before Lopez realized that this was something he would want to spend the rest of his life working on. “I was in middle school when I decided to be a physicist,” he said.

It was a decision he knew was right for him, even if his guidance councilor wasn’t keen on the idea. “He advised me not to,” Lopez said. He added that the councilor told him that there would be few jobs and it would be difficult to find work in the sciences, but Lopez would not be dissuaded.

After he graduated from high school, he enrolled at the University of Texas at El Paso for his bachelor’s and master’s in physics. For his Ph.D., he worked in nuclear fragmentation and plasma physics at Texas A&M.

He took a postdoctoral position in nuclear physics at the Niels Bohr Institute. He liked it not only because of its reputation, but also because they were actually working on some of the nuclear fragmentation models he had helped develop.  “That was kind of the perfect place for me,” Lopez recalled.

While in Copenhagen, his love for nuclear physics blossomed. He was captivated by how particles move between the realms of quantum and classical mechanics. “You have a quantum system that you can explore with classical mechanics, and that is what I find fascinating,” he said.

After that he took a second postdoctoral position at Lawrence Berkeley National Laboratory. At the end of his stay at there, his alma mater offered him a full-time position, which he promptly took. “There’s nothing like family, so we immediately took the offer and came back in 1990, and have been here ever since,” Lopez said.

Once he returned to Texas, in addition to his research, he started to work more on mentoring the next generation of physics students. “Now as a professor, I see that many of my students pick their careers based on their deficiencies rather than their interests,” Lopez said. “This is why over the years, I have gotten involved with fixing that problem.”

He saw students shy away from pursuing a science career because they perceived themselves as inherently bad at science, rather than just beginners at it. He started mentoring undergraduates and graduate students, and helped guide 60 students through to earn physics degrees.

In addition, Lopez worked to help develop the physics community in Mexico. He is active in the Mexican Academy of Sciences, which accredits physics programs in the country, and he is currently the president of the Radiation Physics Division of the Mexican Physics Society. He also helped develop hands-on materials to bring students into physics. “One of the things that I have done is that I have gone to the high schools on both sides of the border and attract [students] to the field,” he said.

Lopez is no stranger to the Bouchet Award. “I was chair of the [APS] Committee on Minorities when we managed to get the funds to get the award established,” he said. “I’ve seen this award since its beginnings. “

He added that he was honored and humbled to receive the award after his years of work. “I’m very happy to receive it,” he said. “All of this gives me some confirmation that what I’ve been working on is valid.”

He said he is hoping to use the funds to help host a meeting on the physics of radiation and wants to highlight the work and lives of scientists from both sides of the border.