The Physics of Physics Colloquia 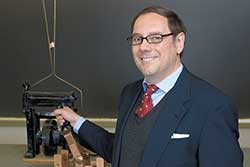 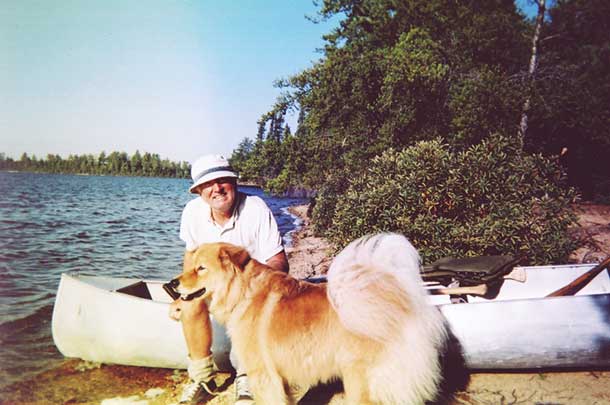 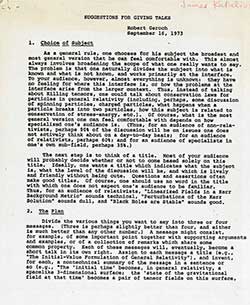 Over the years, I have attended many physics colloquia that were too difficult to follow — I’ve rarely heard one that was too simple. It is a sad truth, but expertise in physics research does not automatically make one an expert at communicating physics. Too often one leaves a colloquium more turned off than excited following a presentation on a cutting-edge breakthrough. This is a missed opportunity for both the speaker and the audience, but it need not be this way.

I don’t claim to be an expert in giving physics talks. Rather, I am writing this essay because I recently rediscovered a paper I first saw as a graduate student titled Suggestions for Giving Talks, by someone who is an expert in giving physics talks: Robert Geroch of the University of Chicago. Geroch, a theorist specializing in the general theory of relativity, is renowned for the clarity and vibrancy of his lectures, and his rules for “how to give a physics talk” are simple and practical. There may indeed be an “art” to giving a good physics talk, but Geroch approached the subject as a “science.”

I summarize Geroch’s protocols here, with my own two cents thrown in. Quotes from Geroch’s Suggestions are italicized; the full text of his essay (and I highly recommend that you read it all) can be found online.

Step One: Choose your Subject and Title

The early, preparatory stage in the organization of a colloquium, where one sets the level of difficulty and amount of information to be imparted, is the rocky shoal on which many a talk has foundered. Before you begin creating any PowerPoint slides, you should ask: What is the key, take-away point that you want to impress on everyone when they leave your talk? If the next day they describe your talk and what they learned, what do you wish them to say? Ideally this will form the Conclusion of your talk.

The next step is to think of a title. ... Ideally one wants a title which indicates what the subject is, what the level of discussion will be, and which is lively and friendly without being too cute. Questions and assertions often make good titles. Of course, one should use no word in the title with which one does not expect one’s audience to be familiar. Thus, for an audience of relativists, “Linearized Fields in a Kerr Background Metric” sounds technical, “Perturbations of the Kerr Solution” sounds dull, and “Black Holes are Stable” sounds good.

Step Two: The Flow of the Talk

All talks begin, naturally enough, with an Introduction, which should take up no less than one fifth of the time available for the talk. According to Geroch, this is where you should emphasize the types of problems under attack, why they are being attacked, the methods one uses ... Why does one think about this subject at all? Why is it interesting? What has it contributed to our understanding of Nature? What is the present state of the subject?

The next step is to reveal the plan of the talk. ... Divide the various things you want to say into three or four messages. (Three is perhaps slightly better than four, and either is much better that any other number.) A message might consist, for example, of some important point together with supporting arguments and examples, or a collection of remarks which share some common property. Each of these messages will, eventually, become a short talk in its own right.

Here Geroch makes an important point — a physics colloquium is not an article in a physics journal. While they share the same goal — to describe a research accomplishment — the way they optimally do so differs greatly. Rarely is the audience well served when the colloquium is organized like an article in Physical Review, with an Introduction, Sample Preparation, Experimental Results, Discussion, and Conclusion. A better approach is to identify the key take-away messages for each portion of your talk. The outline of the talk in the Introduction lays out the various topics that you will address. Your outline slide can be redisplayed between each section throughout the talk, with the upcoming message highlighted. Recasting your research into these distinct “messages” is the hardest part of organizing your presentation.

Step Three: The Talk itself

So, you’ve decided on a subject, a title, and the three or four key points that you hope to communicate to the audience. All that remains is the small detail of the actual talk. Any information you present should be absolutely necessary to convey the “message” that you hope to deliver in any given portion of your presentation. You should [omit] the details and specifics that are not crucial to the story you are telling (even though they require the vast majority of your time in the lab). You can, and probably should acknowledge these omissions — for example, “Of course, this is an over-simplification of the material growth process.” This simplification should extend to any equations and data presented as well.

Geroch suggests that figures contain only the essential information, and that they be given a title, which could be the take-away message from the graph (e.g., “Conductivity Increases with Nanocrystal Concentration”). Spell out with words what is being plotted on the various axes, rather than relying on the audience to remember what the symbol “w”’ or “H” represents. Always take a minute to walk the audience through the figure. (“Here I plot the log of the conductivity against inverse temperature, so that a simple Arrhenius behavior would yield a straight line...”) You have been staring at these data and plots for years, but many in the audience have not. If you jump into the interesting aspects of the plot, some of your audience will be distracted, focusing instead on the basics of what is being plotted against what, and will not be fully listening to your discussion. Taking the time to describe the axes forces you to slow down enough so that the audience can follow, and will also likely lead to a reduction in the total number of figures in your talk.

The last resort for expressing an idea is through an equation. In my opinion, equations should be thought of as tools for making a point, not as data to be stored by the audience for their future use. (How many times have you actually used in your own work a detailed equation copied from a lecture?) ... Every symbol appearing should be defined, and if necessary, discussed. All this takes time, so it’s a good idea to set aside several minutes to treat a single equation. ... If a talk has more than five non-trivial equations in it, it’s beginning to get equation-heavy.

Geroch’s line about how often you use an equation presented in a colloquium in your own research holds doubly (in my opinion) for data presented in table form. Moreover, even when presenting routine conditions under which your samples were prepared, you can just as easily and clearly provide this information as bullet points in a slide as in a table.

Finally, Geroch provides suggestions for the actual mechanics of public speaking, including the handling of questions. If a question comes up during the talk, he recommends that, after the question has been addressed, one return to a previous slide or point, and work your way back to the stage when the question was asked. He also makes an important point about specificity: Be explicit whenever you can find a way to do so. .... One can sometimes introduce an artificial explicitness. Thus, in a discussion, “the ten-gram mass” and “the five-gram mass” are better labels that “this mass” and “that mass,” or than “m1” and “m2”.

Do not allow your audience to get bored. If they look bored, try to drum up some enthusiasm. You might, for example, stop what you’re doing and repeat, loudly, what your plan is, where you are in that plan, and why this is a problem of interest.

I have never forgotten a talk I attended when I was a graduate student at the University of Chicago by Jack Cowan, who implemented a similar strategy, though in a rather meta-fashion. At the mid-point in his seminar, Cowan stated that this was the stage in his talk where he typically stopped and told a joke. We all laughed, and then he continued, noting that now he did not have to!

It is almost always a disaster to run over on one’s time. (The audience becomes bored and anxious to leave. Not only do they not learn anything after your time was up, but they tend to lose the thread of what went on before.) If you see that your time is up before you’re finished, I would suggest that you stop there, and summarize in a few sentences.

Rather than over-stay my own welcome, I will follow Geroch’s advice and stop here. I am grateful that chance allowed me to rediscover Geroch’s Suggestions, and I have started the hard work of revising my talks to incorporate these suggestions. There is a great deal of interest of late in improving science communication, and we can all begin by improving our communication with each other.

James Kakalios is the Taylor Distinguished Professor in the School of Physics and Astronomy at the University of Minnesota, and the author of The Physics of Superheroes and The Amazing Story of Quantum Mechanics, both published by Gotham Books.