Indiana Jones with a Physics Degree 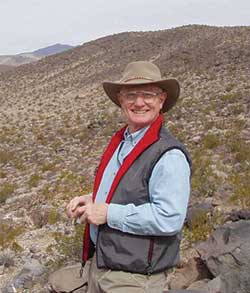 Sandy Rogers surveying in the Panamint Mountains of the Mojave Desert. 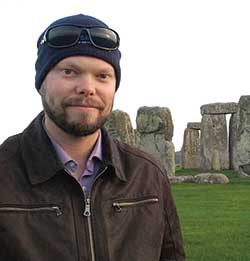 As an undergraduate, I pursued a double degree in mathematics and anthropology. Both subjects enthralled me — I loved the elegance and logic of math as well as the mystery and adventure of anthropology, especially archaeology. I saw links between the two seemingly disparate subjects, whereas my advisors and almost anyone else with whom I shared one or the other of my twin loves reacted much differently. Most raised an eyebrow, and I was met with puzzled faces. They grieved for my choice, and declared with sadness, “That’s an interesting combination.” But I wasn’t deterred, and in fact I thrived while studying abroad in Cairo, as I pursued grant-funded research in Ancient Egyptian number theory, cryptography, and religion.

Duane Hamacher is an example of the latter. An academic in the Nura Gili Indigenous Programs Unit of The University of New South Wales (UNSW) in Sydney, Australia, he has a bachelor’s and a master’s degree in astrophysics and a PhD in Indigenous Studies (with a focus on cultural astronomy) from Macquarie University in Sydney. “I moved to Australia to do astrophysics, but was pulled over to the dark side,” he jokes. “I liked astronomy but also liked cultural studies. I wanted a job where I wouldn’t have to be stuck coding all the time, where I could go out and explore.” While completing his dissertation, Hamacher realized that he could carve his own niche combining astronomy and anthropology, which he envisioned would give him a competitive advantage in the academic job market.

His gamble paid off, in what is probably the most unusual example of networking and six degrees of separation I’ve come across. According to Hamacher, the head of the UNSW’s Indigenous Studies program was riding a camel across the Gobi desert with the director of Microsoft Research. As they chatted, they discussed how the company was interested in enhancing its WorldWide Telescope project with indigenous aspects of astronomy. Did the professor know anyone with expertise in both astronomy and anthropology? Why yes, he did — a simple literature search turned up Hamacher, and soon the head of the program called him with a job offer.

Today, as an Australian Research Council Fellow, Hamacher studies the astronomical knowledge of Torres Strait Islanders, one of the indigenous peoples of Australasia, whose culture is largely based on their practical knowledge of the cosmos. “I am interested in scientific information encoded in oral traditions,” he explains. “Indigenous knowledge has a scientific component developed by people who have used it for practical purposes for tens of thousands of years. It’s structured knowledge about the natural world.” Using ethnographic, historical, and archaeological methods to analyze indigenous cultures, he has been “blown away” by the Islanders, who, he says, “use astronomy for everything.” They link the movement of the constellations to animal behavior. (For example, they know that when the big dipper touches the horizon at sunset, it is shark breeding season and time to stay out of the water.) They also use this knowledge to build timetables indicating when to hunt turtles and plant crops for food. He adds that the Islanders are also unique for using the scintillation of the stars to measure the degree of moisture in the atmosphere to predict weather.

Hamacher explains that although he doesn’t conduct physics research, “My background is very useful. It provides a rigorous set of eyes for solving problems in a systematic fashion.” Kate Craig, a UCLA doctoral student in history with an undergraduate degree in applied physics and history, agrees. She notes that for her work in investigating relics and their movement across societies, “Physics has given me the view from the mountain,” and this 360 degree, holistic perspective has aided her in making her work “accessible and relevant to people in other fields.”

Alexander “Sandy” Rogers has also found great value in studying physics as he transitioned into anthropology. He built a second career later in life after 40 years working as a physicist and an engineer at the Naval Air Weapons Station China Lake and The Johns Hopkins University Applied Physics Laboratory. He spent much of his time conducting experiments with infrared molecular spectroscopy, lasers and radar, but when he retired in 2002, he didn’t spend his time playing golf. Instead he went back to school to investigate his other field of interest — archaeology.

Rogers immediately realized that his physics experience was a great asset in the field, especially as he began looking into obsidian hydration dating, an archaeological dating technique that was already in use but had not been analyzed in much detail. The method, which uses the water content in obsidian artifacts to identify how old they are, is extremely useful in determining the age of objects. It is cheaper and faster than carbon dating, he explains, and although it is less accurate, with obsidian dating, “You know you’re dating the artifact [itself] and not … [its] material.” Rogers has spent the last decade perfecting the technique, and says he “works on the math to compensate for changes in temperatures going back 12,000 years. … Most people who have worked on this method don’t have a background in mathematics or chemistry. I am trying to give it solid footing in the community with scientific rigor.” He has written numerous papers on obsidian dating and currently serves as an archaeological consultant and the archaeology curator for the Maturango Museum in Ridgecrest, CA, a resource for the cultural history of the Upper Mojave Desert.

Like Sandy Rogers, Michael “Bodhi” Rogers (unrelated) uses his physics expertise to solve archaeological problems. He started his career by pursuing a bachelor’s degree in physics, but in graduate school did a double master’s in physics and archaeology. His doctorate was in physics. Now he is in a unique position: He is an associate professor of physics and astronomy at Ithaca College, where he coordinates physics teacher education and conducts research related to improving physics education. But the majority of his time is spent as an archaeogeophysicist, and in that capacity he uses numerous techniques from physics research to aid archaeologists and other anthropologists in their projects. His toolbox includes above- and below-ground instrumentation, such as ground-penetrating radar, cesium magnetometry, fluxgate gradiometry, resistivity, conductivity, 3D laser scanning, and 3D printing. “I’ve worked at many sites and time periods, including the Revolutionary War era sites of Old Fort Johnson and Fort Klock in New York, Contact-period Native American sites in New York, an 8th-to-12th-century Irish monastic site, the Klondike Gold Rush city of Dyea, as well as several sites to locate unmarked burials,” he says, just to name a few. He has also conducted archaeological excavations.

For a project in Cyprus, Bodhi Rogers and his team surveyed a 25-acre area dating to the late Bronze Age (approximately 3,000 years old). He explains, “The goal was to map the remaining city walls to understand the layout of the city and see how people express power through urban design. ... We still have to excavate, because archaeogeophysics doesn’t tell us how old things are or what the function of the buildings was.” But his efforts “make the archaeological excavation much more efficient and focused, since we already know where to dig and what questions to ask.” Using ground-penetrating radar and magnetometry, he was able to reveal the pattern of the city. Ever the physicist, Bodhi has also examined how to improve ground-penetrating radar, especially under wet conditions, and has published studies on this topic.

The appeal of a dual career that unites these fields is clear. For Bodhi Rogers, the range and abundance of intellectual challenges never ceases, especially since, given his knowledge, he can easily navigate a diversity of archaeological sites and time periods. “I get to travel the world and visit cultures most people don’t get to experience,” adds Hamacher. “It’s a phenomenal job that is incredibly interdisciplinary and extremely rewarding.” It’s amazing what can happen when one explores an “interesting combination” of subjects.”

Alaina G. Levine is a science writer and President of Quantum Success Solutions, a science career and professional development consulting enterprise. Her new book, Networking for Nerds, on networking strategies for scientists and engineers, will be published by Wiley in 2015. She can be contacted through her website or via twitter @AlainaGLevine.