January 1, 1925: Cecilia Payne-Gaposchkin and the Day the Universe Changed 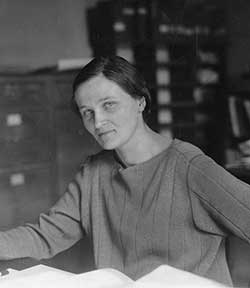 Cecilia Payne made a long and lonely journey from her childhood in England to prominence in a scientific community that begrudged a place to women. She began her scientific career with a scholarship to Cambridge University, where she took the course in physics. After meeting Harlow Shapley from Harvard, she moved to Massachusetts and pursued a doctoral degree in astronomy. Her 1925 thesis, entitled Stellar Atmospheres, was famously described by astronomer Otto Struve as “the most brilliant PhD thesis ever written in astronomy.” By calculating the abundance of chemical elements from stellar spectra, her work began a revolution in astrophysics.

Harlow Shapley liked to say that no one could earn a PhD unless he had suffered in the process. As she neared the end of her doctoral project on stellar spectra, Cecilia Payne wrote, “There followed months, almost a year as I remember, of utter bewilderment. Often I was in a state of exhaustion and despair, working all day and late into the night” [1]. The plight of suffering graduate students is perhaps best expressed by a line from poet Percy Bysshe Shelley, in 1819: “Like the poets, they learn through their suffering what they teach in their songs.”

When Cecilia Payne began her study of stellar spectra, scientists believed that the relative abundance of elements in the atmospheres of the Sun and the stars was similar to that in Earth’s crust. In 1889, geochemist Frank Wigglesworth Clarke’s The Relative Abundance of the Chemical Elements was the result of his comprehensive sampling of minerals from many parts of Earth’s crust. Many of the strong lines of the solar spectrum came from the elements most abundant on Earth. The pre-eminent American physicists at the time, Henry Norris Russell and Henry Rowland, believed that the elemental abundances on Earth and the Sun were substantially identical. Russell wrote [2] “The agreement of the solar and terrestrial lists is such as to confirm very strongly Rowland’s opinion that, if the Earth’s crust should be raised to the temperature of the Sun’s atmosphere, it would give a very similar absorption spectrum.” The spectra of the Sun and other stars were similar, so it appeared that the relative abundance of elements in the universe was like that in Earth’s crust.

Payne had a better knowledge of atomic spectra than most astronomers at the time. She also knew the 1920 work of physicist Meghnad Saha on the thermal ionization of atoms. He showed how to use an equilibrium equation from physical chemistry to relate the ratio of excited states to ground states, and the fraction of ionized states to the temperature, electron concentration, ionization potential, and other properties of the stellar atmosphere. Payne met Saha when he visited Harvard, just as his work was becoming known to astronomers.

Payne’s thesis [3], finished on January 1, 1925, confirmed the view of Russell and Rowland on the abundance of the heavier elements in stellar atmospheres. She then applied Saha’s equations to the Balmer series absorption in hydrogen, which originates from atoms in the first excited state. She was the first to appreciate that, in the atmosphere of the Sun at 5700 K, only about one in 200 million of the hydrogen atoms is in this excited state, so that the total quantity of hydrogen is grossly underrepresented by the Balmer absorption. A similar argument holds for helium. She found similar results for other stars. Payne concluded that, unlike on Earth, hydrogen and helium are the dominant elements of the Sun and stars. Henry Norris Russell strongly opposed this conclusion and convinced her to omit it from her thesis. However, currently accepted values for the mass fraction of elements in the Milky Way Galaxy are: ~74% hydrogen, 24% helium; all the remaining elements, 2%, confirming Payne’s result. Her discovery of the true cosmic abundance of the elements profoundly changed what we know about the universe. The giants — Copernicus, Newton, and Einstein — each in his turn, brought a new view of the universe. Payne’s discovery of the cosmic abundance of the elements did no less.

In 1934 Payne visited the observatory in Leningrad, at a time of great Soviet-German tension, hard living conditions, and suspicion of foreigners. She continued on to visit Germany, where conditions were equally tense, and met a young Russian astronomer, Sergei Gaposchkin. Despite hardships and persecution in the Soviet Union because of his political views, he had achieved success as an astronomer. Now he faced persecution because he was Russian. He asked her to help him get to America. She was moved by his story, and, after returning home, she worked hard to get him a visa as a stateless person. He came and, later in 1934, they married and she became Cecilia Payne-Gaposchkin.

On completing her doctorate, after considering other opportunities, she decided to stay on at Harvard. At the time, advancement to professor was denied to women at Harvard, so she spent years in lesser, low-paid duties. She published several books, including The Stars of High Luminosity, 1930; Variable Stars, 1938; and Variable Stars and Galactic Structure, 1954.

Her obituary read, in part, “Cecilia Helena Payne-Gaposchkin, a pioneering astrophysicist and probably the most eminent woman astronomer of all time, died in Cambridge, Massachusetts, on December 7, 1979. In the 1920s she derived the cosmic abundance of the elements from stellar spectra and demonstrated for the first time the chemical homogeneity of the universe” [4].