Wanted: Input from Physicists on Future of Computing 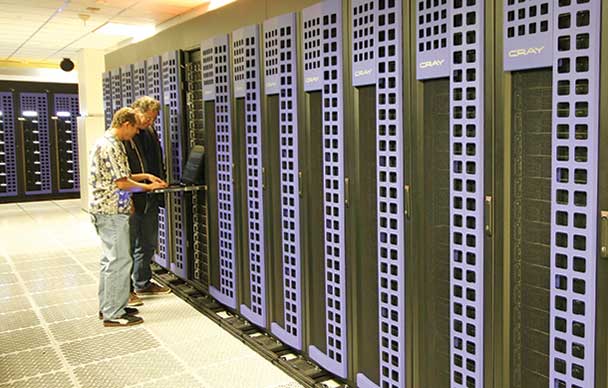 Future of supercomputing: Top computers are funded by the Department of Energy. Should NSF chase the bleeding edge?

The National Research Council is developing a report for the National Science Foundation on advanced computing, and is looking for input from the physics community. The report, “Future Directions For NSF Advanced Computing Infrastructure to Support U.S. Science and Engineering in 2017-2020,” will review what the NSF is doing to get scientists access to the advanced computing hardware and software they need, and what can be improved.

“This is an activity that the NSF conducts every five years or so,” said Robert Harrison, co-chair of the committee putting the report together. “It assists them in creating a roadmap, a set of priorities for the next five years.” He likened it to a smaller version of the surveys carried out every ten years by the astrophysics community to plan a decade’s worth of scientific projects.

To help promote discussion in the scientific community, the committee released an interim version of its report this summer, which outlined the direction the full report will take. “It’s really a list of questions on topics we’re considering,” Harrison said.

The NSF supports 16 sites across the country that let researchers use supercomputing hardware for computation-heavy research. The writers of the report are in part looking to see how beneficial these centers are, and what can be improved with the resources available. “We look at the frontier of computing and the science that can be done on the biggest computers.

“Unfortunately the NSF is a long way from this frontier right now,” Harrison said, adding that other agencies like the Department of Energy have the top-of-the-line computers. “Does it make sense for the NSF to chase the bleeding edge of supercomputing, or does it make more sense to partner with other federal agencies?”

The final report with concrete recommendations will be submitted to the NSF sometime in July 2015, and the committee putting it together hopes to hear from researchers by the end of January.

“What we would really value from APS News readers is that sense of what are the big science opportunities … that need advanced cyber infrastructure in any form,” Harrison said. He added that it wasn’t just hardware requirements they were looking for input on, but also software and access needs.

More broadly, the committee is looking for a picture of what scientists can do with more access to supercomputing centers over the next few years. Harrison said he hoped to be able to draw on white papers and other comments submitted through the website. “What are the big science drivers, what are the scientific frontiers in order for the NSF to maintain itself at those frontiers of science?” Harrison said. “What really needs this stuff and what happens if the NSF doesn’t do something?”

Scientists can read the full interim report and submit comments on The Future of NSF Advanced Computing website.