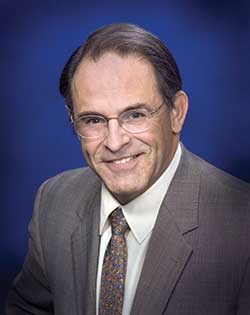 Samuel H. Aronson, former director of Brookhaven National Laboratory and current director of its RIKEN BNL Research Center, will begin his term as President of APS on January 1, 2015. In an interview with APS News, he discusses his goals for the coming year.

What do you see as the most pressing issues facing the physics community right now?
There are a number of issues, one of which is federal research budgets. We’re still in a chaotic and fractious government funding landscape, so that remains a big issue. Another is the transition to open access publishing, which affects the Society and other societies, and it will change the way which our members and physicists in general get access to scientific publications. That’s something we have to focus on within the Society.

Other big issues are ones on which the Society has a public position that affects everybody, like climate change. I would mention education, starting with early STEM education and going all the way up to graduate level scientific training. Finally, the issue of maintaining and building the cohort of physicists pursuing their careers in this country. It will be a different mix than it has been in the past, due to our ability to retain people who come to this country for graduate level education in physics. More frequently than in the past, they return to pursue scientific careers at home. I think therefore, we need to access the American population in all of its diverse dimensions to find the best and brightest people to fill the pipeline domestically.

What will be your main focus during your presidential year? What approach will you take towards achieving these goals?
There are a number of APS issues. The Society is going through a transition in the way it conducts its work on behalf of the members, and also perhaps in its response to externalities, such as open access publishing and open data. APS needs to rethink the way it finances its work on behalf of the members of the Society. There are issues internal to the Society that are going to take a lot of attention this year, in particular the implementation of the recently approved governance changes. Internal operations and relations between the membership of the Society and the leadership of the Society will be a big focus. Then there will be efforts to represent the Society’s interests and concerns to the public, to the funding agencies, and to our international partners, so there will be a fair amount of outreach that will require attention.

How well do you think the Society is serving its members? Are there any areas where you think APS programs could be enhanced?
I think in general the Society is serving its members very well. The membership wants access to scientific publications in high quality journals, which the Society provides. Our journals are the benchmark journals of physics in the world. The membership wants to ensure that the Society continues to provide active and attention-worthy meetings and conferences, which we also do. Those I think are the main services that the membership expects. I have some concerns that as a Society our communications with our members, providing them with information more specific to the American Physical Society, could be improved and we’re doing some work to look at whether that’s so or not. That work will continue to improve our communications internally.

Something maybe not so visible to our members, but still important, is the strategic budgeting of the Society’s operations.This ensures we’re good stewards of the Society’s assets and efficient providers of the services they expect with the funds available. The Society’s staff and its governance bodies — the Board of Directors and the Council of Representatives — are responsible for the execution and the oversight of such functions. I think that’s a little bit off the radar screen of the typical members in terms of the services that we provide.

What do you see as the Society’s role in public policy?
I think we have an important voice in scientific matters and we need to continue to exercise it in our public statements and in our outreach efforts. Concerns and opportunities where this Society and the physics community can provide benefit to society overall comes in many forms; the research, education, and physics careers we advocate for or the impact of policies that we talk about in our public statements. There are a number of ways in which we can influence the public’s opinion of the work of the physics community and its value to the larger society. I think those are the main things that we need to accomplish with our outreach.

In recent years, APS has been increasing its focus on education and outreach. What do you think of these efforts and how will you guide them?
I think they’re very important for the reasons I mentioned earlier regarding the pipeline of physicists that is generated in this country and elsewhere, and that does the research in which the U.S. would like to maintain leadership. Education has two features. One is just raising the awareness and general literacy of the population at large on scientific matters. The other is helping to build the most robust and most diverse pipeline of people who want to work in STEM fields or fields where a physics degree turns out to be an important asset, and that can be in a very large variety of fields that are not scientific per se.

How will you guide APS through the current period of corporate reform transition?
We’re well set up to implement the reforms that we’ve worked on over the past couple of years and which were supported by a very large majority of the voting members in the recent vote on the new Constitution and Bylaws. This will involve organizing the operations under a chief executive officer and giving new roles to the former Executive Board, now the Board of Directors and to the Council of Representatives. That work has already started. There is new leadership for the council and there are new meetings already going on to plan for more effective council meetings and more strategic board meetings. I’m very confident that with the work of the board and the council together with the CEO, we’re heading in the right direction in implementing the changes we want to make. And I believe those are going to make us more into a modern and nimble society in terms of carrying out our work.

How did you become interested in physics?
That goes back to high school I guess. I was raised and in high school during the Sputnik era. I felt the tug of that kind of work as a result of being exposed to the advances in space science and finding that I had a facility for math and for physics starting in high school and certainly in college. I just never considered doing anything else other than physics as far back as I was making decisions or even having thoughts on those subjects.

Why did you choose to run for the APS presidential line?
I had been an APS member since I was in graduate school and felt that it was the right thing to do; to pay back in a way or give something back to the Society for its support over the years. I think the only thing I actually did as a member of the Society other than attend meetings was to review papers for Physical Review, and I felt there was more I should and could do more at this stage in my career.

Any other thoughts?
One thing I think I didn’t touch on but maybe should have emphasized more is the importance of diversity in the physics community. I think we are missing the benefits of the participation of a lot of smart people, just because physics as a field is still not as diverse as it should be. In other words, it doesn’t draw from the maximum pool of potential physicists. I’m very supportive of, and interested in, the Society continuing to develop a more diverse membership and programs aimed at attracting a more diverse future physics community.