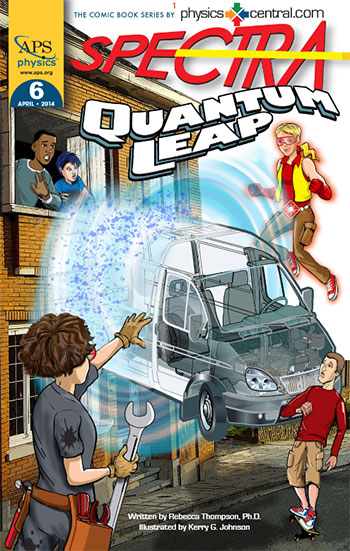 The APS outreach department announced the winners of this year’s PhysicsQuest competition for middle-school students. The first place winner is Wendy Goodwin and her students at the Discovery School in Huntersville, NC.

“PhysicsQuest is a program in which we create kits with everything you need to do four physics experiments and then we wrap everything in a story about our laser superhero ‘Spectra,’” said Becky Thompson, the head of APS Public Outreach. “It’s important because we want to make sure these kids have an exciting and fun experience with physics.”

The theme of the kits and the accompanying comic book this year was quantum mechanics, which featured the APS laser superhero squaring off against the nefarious Pauli Black of the Blackbody Repair Shop. The four experiments had students analyzing the color spectra of an LED shining through dyed water, detecting reflected ultraviolet light using a glow-in-the-dark panel, analyzing the topology of folded clothes, and deducing ways to connect power utilities to houses without crossing electrical lines in a donut shaped universe.

“It’s very difficult to teach middle schoolers about quantum mechanics specifically, so we talked about things like absorption spectrum, how different colors of light have different energies, and then expanded it to incorporate other, so-called modern physics [concepts],” Thompson said.

Goodwin and her class have been participating in the program since it was started in 2005. Her class received a set of autographed comics, a prize pack, and a $500 gift certificate to the science education supply company Educational Innovations, and each student in her class will receive a new iPad. “I think the experiments are good,” Goodwin said. “Every year we’ve done it they’re really excellent. They’re simple and they get the point across.”

She added that her students were excited to get the iPads and she hoped to integrate them with their curriculum. “We’re really excited that someone who has been with the program for so long and continues to participate got a chance to win this year,” Thompson said.

The second place winner is Christine Stewart’s Gamma Rays C from the Governor French Academy in Belleville, IL, whose class received a set of autographed comics, a $300 gift certificate to Educational Innovations, and a prize pack. Third place went to Caleb Rohler, a homeschooler from New Oxford, PA, who received an autographed comic, a $200 gift certificate and a prize pack.

Each year APS sends 13,000 kits to more than 3,500 teachers. This year kits went out to every state in the U.S. The competition is open to any group who signs up, which included neighborhood science clubs, Boy Scout and Girl Scout troops, and church youth groups.

The PhysicsQuest kits were first introduced in 2005 to coincide with the World Year of Physics, celebrating the 100th anniversary of Albert Einstein’s “miracle year.” The 2009 kit was the first to feature a comic, which told the story of Nikola Tesla and the electrification of the 1893 Chicago World’s Fair. Spectra and her arch nemesis Miss Alignment made their debut in the 2010 kits about lasers and optics, to correspond with LaserFest, the 50th anniversary of the invention of the laser.

“In 2015 [Spectra] will again be battling Miss Alignment,” Thompson said. “It will be part of the 2015 International Year of Light, so we wanted to bring back Miss Alignment. All of the experiments will be about light.”