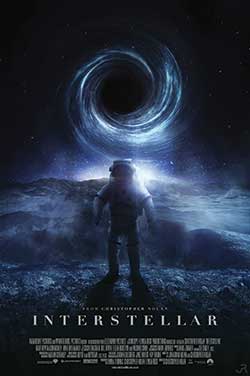 The new science fiction blockbuster Interstellar has been turning heads in the science community for its serious treatment of black hole physics and general relativity. It started as an idea in the mind of Caltech physicist Kip Thorne who envisioned a film about interstellar travel using wormholes to traverse the vast distances between the stars. Developed first by Steven Spielberg, then later by director Christopher Nolan and screenwriter Jonah Nolan, the project kept Thorne on as science advisor. Thorne has also written a book, The Science of Interstellar, published in early November. After the movie’s premiere, he spoke to Michael Lucibella about his work on the film.

Why was it so important to make sure that nothing in the film violated the laws of physics? Why have that be such a tenet of the movie?

The one difference, and this was a difference in vision we would be dealing with, is that this film, involving the physics that it does involve, ranges from very well established science, in the form, for example, of black hole physics, to very speculative science, in the form of the wormhole and what is called in the film the fifth dimension and what physicists call brane-world physics. So for me that is particularly interesting because it gave me a chance in the book to try and educate the public about the difference between well-established science and educated guesses and speculation and how one gets transformed into another through research. It gave the filmmakers a lot more latitude than if they were dealing only in the domain of the well-established science.

What kind of challenges did keeping the science grounded pose for the filmmakers in the development of the narrative?

I discuss [all of the compromises] that I’m aware of in the book. One example is in the accretion disk around “Gargantua,” the black hole, where if you put in the Doppler shift, one side of the disk is moving towards you and the other side away, that changes the colors from blue on one side to red on the other, that’s probably ok, fine, but it changes the brightness so that one side is far brighter and the other is far dimmer than the other, and by the time you’ve done that, a general audience is going to be totally baffled by what they’re looking at. So a conscious decision was made to leave out the Doppler shift and have an accretion disk that has the right shape but not the right lopsidedness.

So there were places where those sorts of compromises were made, quite consciously, and I spell them out in the book. That’s an artistic license, that I think [the filmmakers] surely are entitled to make. What I loved about working with [director] Christopher Nolan and Jonathan [“Jonah”] Nolan on the screenplay and with the computer graphics folks during production and during the development of the visuals of the black holes and wormholes, was that they aspired to be as accurate as possible, subject to the constraint that you don’t wind up with a totally baffled audience. If the audience is baffled, of course you can always explain to them what is going on but if that is going to get in the way of a fast paced film, this would never be the great success it is with the general audience if you tried to explain. Those kinds of compromises were made, and made consciously here, by contrast with most science fiction movies where the filmmakers are unaware they are making compromises, they’re just creating things out of whole cloth.

The other motivation [was] to either write a book or a Blu-ray, and I chose a book in the end, that would capitalize on the movie [as a lure] to get people intrigued about science, and then have something to set that hook. They can go read about it, learn some science that they never knew and discover that “Gee, science is kind of awesome. Maybe I should pay more attention to science, or maybe I should think about a career in science.”

How much influence did you have in shaping the narrative of the film?

Throughout the screenwriting process, first with a pre-draft of the screenplay by Jonathan Nolan, [and] about three drafts with Christopher Nolan, every few weeks I would meet with them and we would brainstorm about science, they would have ideas they wanted to put in, I would suggest alternatives. And we would go back and forth, I would go home and sleep on it and I would write for whichever one I was working with -- they work independently -- write a little document maybe five pages with diagrams explaining my thoughts about it. This brainstorming gave rise to the idea of gravitational anomalies, which play a central role in the film, for example. [It]was in the brainstorming sessions with Chris where we decided on going into the black hole.

What was it like for you to see a fully rendered black hole on the big screen for the first time that was based off of your calculations?

There were two phases of this. All of our initial work on this was with a black hole that has no accretion disk. What for me was amazing was to receive back from the team at [visual effects company] Double Negative, from Oliver James and Eugenie von Tunzelmann, film clips with very very high resolution of things I’ve only ever seen in very low resolution before. It was sort of, in some ways, mind blowing, just sitting at my computer terminal with a film clip that they had sent to me via FTP or Dropbox, gigabyte film clips that last for 30 seconds. That was really very satisfying.

I had been seen many years ago an image of an accretion disk with gravitational lensing that Jean-Pierre Luminet in France had made. I had sort of forgotten about it, but when I first saw the gravitationally lensed accretion disk that you actually see in the movie, it was a mixture of amazement on one hand and recognition that “Yes I do remember seeing something like that, years ago.” And a bit of awe and excitement that this team at Double Negative had just taken the equations I had given them — they don’t just use ray tracing, they propagate ray bundles or light beams — they’d used light beam propagation equations, laid down their own accretion disk based on artistic models based on astrophysicist’s stuff, and come back to me with a full-blown image of the sort you see in the movie. I was really impressed and gratified that they pulled it off and was so pleased with how it looked.

Is there any one place in Interstellar where the science really had to be compromised or something that makes you wish that the filmmakers did something different?

I think in almost all cases there were conscious decisions and I was involved in the discussions with them and the compromises were made and I was satisfied with them. There was one spot where, it’s a very minor thing, where I wish they did something different and I didn’t have the impact I wanted to have because it was outside the realm of what I was normally talking to them about. That’s on the ice planet, where there are stretches of ice in the ice clouds and other structures where ice is suspended, cantilevered. Ice is not a normal solid; it flows on long timescales, like in glaciers. I think an issue of strength of material and flowing of material, you would probably not be able to get that much cantilevering. Now, if this is the most egregious issue in the film, I would say that these guys did extremely well. This really a very minor thing, just the one spot I sort of wish had been done a little differently.

What were some of the similarities and differences in working on a Hollywood collaboration versus a scientific collaboration?

I was working with people who were equally as brilliant as the colleagues I work with in science. They have a very deep intuition but of a very different sort than mine, and very different backgrounds. It really was an issue of a scientist collaborating with artists by and large, though the people I worked with the most hands on at Double Negative were really a mixture of artists and scientists. Working at that interface was very enjoyable. Working with Christopher Nolan and Jonah Nolan and [producer] Lynda Obst was a lot of fun, just because they’re coming at this from such a different point of view, and particularly enjoyable was my in depth conversations with Matthew McConaughey and Anne Hathaway who are deeply curious, really interesting people and were just a joy to talk to. So yeah, I had a lot of fun.

Do you see this as part of a trend or the beginning of a trend of more scientists and science working its way into Hollywood?

I think it is a trend, and the National Academy of Sciences has tried to foster it through the Science and Engineering Exchange, trying to get connections made between scientists on the one hand and filmmakers on the other. I would hope that this contributes significantly to that. I do believe that having films that are more scientifically based is important for American culture and for world culture. So yes, I think so and I hope so.

What kind of broader message about science do you hope that the audience will come away with?

A very optimistic message; the powers of science and what can be achieved if we work really hard at it. The scene early in the film with Cooper in the schoolroom with the schoolteacher who is denying the reality of the Apollo moon landing that contrasted with the huge effort that is being put in the secret NASA facility to find some way to preserve the human race. I think that encapsulates some of what is going on in American culture these days. I would hope that this film will help to awaken the public to the power of science, and the importance of human inquisitiveness, the quest to understand the universe, the quest to build the tools to deal with whatever nature does to us.