A Brief History of Stephen Hawking 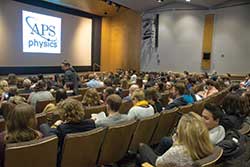 APS and the Smithsonian Institution co-hosted the Washington, D.C. premiere of The Theory of Everything about the life of Stephen Hawking.

Love, fame, triumph, tragedy, and science collide in The Theory of Everything, the new film based on the life of acclaimed cosmologist Stephen Hawking. It’s a humanizing portrait of the physicist and his relationship with his first wife, Jane Wilde Hawking.

Following the narrative of their memoirs, the film opens with Hawking and Wilde meeting for the first time at Cambridge University. The spark between them is undeniable, but soon Hawking learns that he has amyotrophic lateral sclerosis (ALS) — Lou Gehrig’s disease — and doctors give him only two years to live.

The story that unfolds veers far from the traditional Hollywood love story. Famously, Hawking beats the odds, living decades longer than anyone predicted, but losing nearly all muscle control in his body. Still, he becomes a best-selling author and one of the most respected physicists in the world. His is a well-known story, but less known are the personal struggles that he and his wife went through in their Cambridge home as his fame grew and the disease ravaged his body.

At the Washington, D.C. premiere, which was co-hosted by APS and the Smithsonian Institution, screenwriter Anthony McCarten described how he wanted to adapt Jane Hawking’s memoir, Traveling to Infinity: My Life With Stephen, which chronicles her marriage to the most famous physicist in the world. “I wanted to do justice to this extraordinary and one-of-a-kind memoir,” McCarten said.

It’s a complicated memoir to adapt because in real life, there’s no neat, happily-ever-after Hollywood ending. For years the love between Jane and Stephen Hawking united them as they struggled against the encroaching disease and Hawking’s growing celebrity. But the film ends shortly after they split in 1990, when Hawking left her for one of his nurses; five years later Jane Hawking married her choir teacher.

It’s Eddie Redmayne’s remarkable performance that brings out Hawking’s humanity throughout his best and worst times. “One of the best things about my job I suppose is being able to jump between different worlds and immerse [myself] in them,” Redmayne said at the premiere.

He spent a number of months with people with different stages of ALS to prepare for his role in the film. The effort paid off: Redmayne completely loses himself in the role and reproduces Hawking’s personality and mannerisms perfectly. Already there’s a tremendous amount of Oscar buzz around his performance.

Though the film’s central focus is the relationship between Hawking and his wife, his influential work developing groundbreaking theories in cosmology is the narrative backbone of the film. “We make no excuses. We did our homework on the science,” McCarten said.

The film does a good job striking the difficult balance between too much and too little science. The discussions of relativity and event horizons sometimes use some awkward metaphors or unusual turns of phrase, but they rarely feel condescending or overly simplistic.

Black holes had been assumed to emit nothing. But in his big eureka moment, Hawking looks into the burning embers of a fire and has a burst of inspiration. The scene cuts to a lecture he gives to an audience of distinguished physicists about the fundamentals of Hawking radiation. The movie made little mention of the weeks of work he spent developing the theory.

“That might not be the way that Stephen Hawking actually came up with that,” said David Kaiser of MIT who was also at the premiere. “It’s a two-hour film trying to cover a lot of territory.”

Eureka moments aside, it portrays the process of science much better than most other films about scientists. In another scene, Hawking postulates a theory about the nature of the Big Bang. His professor is intrigued, compliments his hypothesis, and then says simply, “Now do the math.” According to Kaiser, the scene “gives us a glimpse of the inherently collaborative and communal process” that scientists engage in.

The Theory of Everything, 123 min., produced by Working Title Films, distributed by Focus Features, released in theaters on November 7.