Making A Career of Putting Numbers on Nature 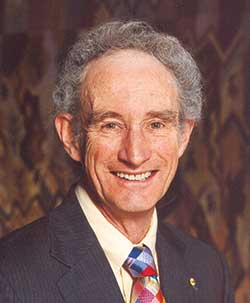 In 1969, a young theoretical physicist named Robert May decided he’d try a little ecology. “It all happened very accidentally,” he insists. May, who was working at the University of Sydney in Australia, had joined a group that was supposed to promote social responsibility in science — it was the ’60s, after all — but he realized he didn’t know what he was supposed to be socially responsible about. So he picked up one of the era’s major environmental science textbooks to study up on things like how to keep ecosystems from collapsing. According to the book, most ecologists believed that a more diverse ecosystem would be more stable than a less diverse one, meaning the populations of the species in the more diverse ecosystem would vary less from year to year. But the author of the book noted that based on his own experience, he found this hard to believe.

May too found it hard to believe. So he went home and began tinkering with the Lotka-Volterra equations, a famous ecological model developed in the 1920s (by two physicists) to describe how two interacting animal populations — predators and prey — will change over time. May found that adding species to the model — increasing the diversity — caused the population swings to increase, not decrease. The next day he went to the head of his university’s biology department and told him, “Here’s this basic principle that seems to be a bit of nonsense.”

The department head replied that he didn’t think math had anything to do with ecology, but nevertheless invited May to give a seminar. Encouraged, May went on to work out a more general mathematical ecosystem model, showing that strong interactions between species can decrease the overall stability of a food web. The work expanded on a theorem developed by Nobel Prize-winning quantum physicist Eugene Wigner; May notes with pride that the rule is now known as the “May-Wigner theorem.”

May eventually published a 1972 Nature paper showing that no simple relationship exists between complexity and stability in nature. With the work, May overturned “one of the really pervasive urban legends” in the field, says Stephen Carpenter, an ecologist at the University of Wisconsin-Madison. “I think he gets a fair amount of credit for bringing a clarity of thinking into that whole branch of ecology.”

“I discovered I’d wandered into an area which, by virtue of the stage it was at, was possibly more suited to my skills,” May reflects, “which were more the skills of the golden age of physics in the 1930s, when there were all sorts of elegant, simple things to do.” Using his physicist’s eye for underlying patterns in complex phenomena, May has pursued a one-of-a-kind career studying everything from biodiversity and fisheries management to infectious diseases and banking systems. His success has led to posts advising top government and financial officials in the U.S. and Britain, as well as a knighthood. (In 2001, May became, to the delight and, perhaps, envy of his science colleagues, Robert, Lord May of Oxford.)

May began his career in the 1950s in superconductivity theory. His PhD work at Sydney involved a major calculation on Australia’s first mainframe computer, which, he says, “left me with abiding desire to deal with computers through the medium of graduate students.” Although he had some early successes in physics — he calls a result on the behavior of elementary particles in two dimensions “the most elegant thing I did” — May began to realize he was a pencil-and-paper theorist living in an increasingly computerized age, and found himself gravitating toward ecology and its mathematically simpler problems.

The turning point in May’s career came in 1971, while on a fellowship supposedly to study physics at the Institute for Advanced Study in Princeton. On a recommendation from a colleague, May went over to the university to meet Robert MacArthur, possibly the world’s most famous theoretical ecologist at the time. MacArthur’s career mission had long been to put ecology, still largely an observational science, on a more solid quantitative footing, but his ambitions sometimes exceeded his mathematical grasp. As soon as they began talking, May started to see solutions to the famous ecologist’s problems, but the meeting was cut short when a colleague called MacArthur away.

The two men met again a short time later, and MacArthur confessed he had arranged to be interrupted in case May was wasting his time. MacArthur then told May he was dying of cancer, and offered the Australian his job. May was flattered but declined, protesting that he wasn’t ready to move halfway around the world; MacArthur died the next year, his life’s work incomplete. But May continued mulling the offer, and his wife eventually convinced him to call the Princeton department chair and ask if the job was still available. The position was still open, and May accepted. “That couldn’t happen even at Princeton today,” he marvels. “I didn’t even ask about salary.”

At Princeton, May’s ecology career began in earnest. His 1973 book Stability and Complexity in Model Ecosystems quickly established him as his generation’s most prominent theoretical ecologist. He scored another coup a few years later, with a study of a mathematical model in population biology, the “logistic map.” The map predicts how populations of insects and other species with distinct generations change from year to year. Surprisingly, May found that if a population’s growth rate — the number of offspring per individual per year — was larger than around 3, its predicted final value never stabilized. Instead the value began flipping between two numbers. When May made the growth rate even larger, the final population began flipping between four numbers, then eight, and so on. He called this pattern “period doubling.” At high enough growth rates even the period doubling broke down, and any apparent relationship between the population’s values in successive years vanished.

May presented his results at the University of Maryland, College Park, and admitted he didn’t understand his model’s behavior at high growth rates. James Yorke, a mathematician at Maryland, then jumped up from the crowd and said, according to May, “‘I know what happens there but I didn’t know about this period doubling stuff.’” The two researchers fleshed out the details and showed that from a simple, deterministic model they could get results that were almost impossibly complicated.

Yorke named the concept “chaos,” and the field exploded. May published his analysis in a 1976 Nature article entitled “Simple mathematical models with very complicated dynamics.” The paper has received over 5,000 citations, many from disciplines far beyond ecology. Once again May had challenged the notion of an orderly balance in nature, and introduced instead the disturbing idea that even seemingly simple natural systems could behave unpredictably, fluctuate wildly, and crash without warning.

But chaos did come with a “grace note,” May says. A graduate student of his, George Sugihara, later showed that unlike completely random events, chaotic phenomena can be predicted a few time steps into the future. On the strength of that work, Sugihara was hired by financial giant Deutsche Bank to model stock futures, and earned a salary unheard of in academic circles. He later returned to academia, and he and May, along with others, are now using their insights to provide mathematical tools for managers of fisheries and other natural ecosystems.

May’s research has ranged widely in ecology and biology, among other things helping to revise upward biologists’ estimate of the number of species on Earth. He has also touched on issues of more direct human concern. A few years after HIV was discovered, May and a colleague simulated how it would spread in Africa. May’s team’s model was deliberately simple, focusing on a few key factors like infection rates between sexual partners. The World Health Organization developed a much more complicated model with far more detailed demographic data, and predicted the disease would spread more slowly. May’s group was criticized for its gloomy prediction, May said in a 2012 BBC interview, but, he added, “sadly, we were right.”

After his 15 years at Princeton, May and his wife decided to try living in England, so May took a joint position at Oxford and Imperial College London. May’s career took another surprise turn in 1995, when he was tapped to be chief scientific advisor to then-prime minister John Major. The British government had been embarrassed by recent science-related blunders, including an incident in which a scientific panel concluded that the rogue protein that causes mad cow disease could never jump to humans (which it was later shown to do, with devastating effect). The government needed a credibility boost, and the brilliant and sometimes blunt May was a good person to provide it. As scientific advisor, May developed protocols for how scientists should and should not advise politicians; his philosophy is that “the role of the scientist is not to tell people what to do, but to tell them what the facts are.”

May returned to university life in 2005, after five years in government followed by a five-year stint as president of the Royal Society. Much of his recent work has focused on economics. In 2006, before anyone outside financial circles was talking about subprime loans, then-Federal Reserve Bank of New York president Timothy Geithner and colleagues at the National Academy of Sciences had started worrying about whether the enormous risks that banks were taking with their money could put the entire financial system at risk. Thinking that knowledge of ecosystems and food webs might yield insights into the interconnected banking world, the economists tapped Sugihara, who brought in May, and the two, along with prominent Princeton theoretical ecologist Simon Levin, wrote a paper in Nature called “Ecology for Bankers.” May says that while he and his colleagues weren’t able to prevent the 2008 financial crisis, they did confirm some important intuitions — for instance, that big banks needed to hold onto a larger fraction of their capital, rather than put nearly all their money into play, as they had before the crisis. More recently May and Andy Haldane, the Bank of England’s chief economist, published a paper, also in Nature, advising governments on how to avoid future financial collapses. Harkening back to May’s work in the 1970s on ecosystem stability, the two called for increasing the stability of the banking system by limiting its overall interconnectedness.

At a birthday gathering several years ago, May reflected to colleagues and former students that no one today could enter ecology the way he did, simply striking up collaborations and immediately seeing ways to advance the field. “It is much more quantitative now than it was when he was entering in the early 70s,” says Anthony Ives, a University of Wisconsin-Madison ecologist and former May graduate student. “And to a large extent Bob is responsible for that.” For his part, May is quick to credit Ives, Sugihara and his many other protégés for continuing to expand the scope of theoretical ecology. “I’ve been very lucky in some of the graduate students I’ve had,” May says.

While he made his mark in other fields, May credits his physics background for launching and sustaining his unique and diverse career. “I’ve hopped around a lot,” he admits. “I have a short attention span; I like doing new things.”

Fortunately, he adds, “If you have a good background in theoretical physics you can do anything.”