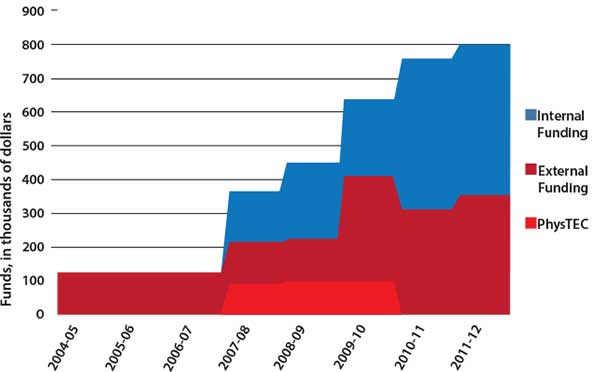 The flagship APS education program, the Physics Teacher Education Coalition (PhysTEC), recently received a strong vote of confidence in its methods. PhysTEC has supported over 30 institutions to develop model programs that increase the production of well prepared high school physics teachers. Physics is the number one shortage area in terms of qualified K-12 teacher candidates, according to the American Association for Employment in Education, and fewer than half of all high school physics classes are taught by a teacher with a physics degree. A study on the sustainability of eight PhysTEC programs found that nearly all maintained their progress over the long term, and many in fact continued to expand teacher production after project funding ended.

Rachel Scherr, Seattle Pacific University, conducted the study to measure the extent to which programs have been sustained after PhysTEC funding ended, and to identify features that ensure sustainable physics teacher education programs. “The programs have so much in common but also such diverse strengths,” said Scherr. “For example, every sustained program has a champion, but each champion has unique expertise and a strong personality that shapes his or her program.”

The study identified two factors that characterize sustainable university-based programs designed to increase the production of highly qualified physics teachers. Specifically, one or more faculty members who choose to champion physics teacher education, in combination with institutional motivation and commitment, can ensure that such initiatives remain viable.

Scherr defines a champion as someone who secures funding and personnel benefiting physics teacher education and negotiates with the institution for changes beneficial to physics teacher education. All eight sites Scherr studied have at least one champion who is a member of the physics faculty, and about half have a champion with a partial appointment in the college or school of education. “In our experience with over 30 sites,” said PhysTEC project director Monica Plisch, “we have found that a champion in the physics department is essential to increasing the number of physics teachers.”

The PhysTEC project is led by APS, in partnership with the American Association of Physics Teachers. Since 2001, the project has funded more than 30 institutions to transform their physics teacher education programs into national models. Collectively, these sites have more than doubled the production of graduates who are well prepared to teach high school physics. The PhysTEC coalition has over 300 member institutions committed to the mission of improving the education of future physics teachers. PhysTEC receives support from the National Science Foundation and the APS 21st Century Campaign. The full report can be downloaded at the PhysTEC Sustainability web page.

This article was prepared by the PhysTec project staff.