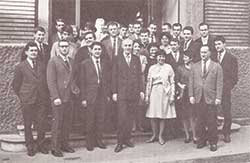 Alfred Kastler with colleagues after winning the Nobel prize in 1966.

When we think of the invention of the laser, we inevitably go back to Albert Einstein’s 1917 paper, in which he first broached the possibility of stimulated emission: An incoming photon inducing an excited atom to emit another photon. In a laser, this produces a beam of coherent light as excited atoms emit photons in a rapid chain reaction. But few remember the contributions of an Alsatian physicist named Alfred Kastler, whose work on Hertzian resonances (using microwaves or radio waves to excite an atom in a magnetic field into low-lying energy levels that today physicists call hyperfine structure) played a crucial role in the subsequent development of the laser.

Born in 1902 in the Alsace region of what was then the German Empire, in the village of Gebweiler, Kastler told a New York Times reporter that he recalled being “attracted to nature as a child, and was once deeply impressed by the eclipse of the sun.” He went to school in the nearby town of Colmar, where his interest in math and science was encouraged by his teachers.

That said, his early ambitions were comparatively modest: He wanted to become a carpenter, although his plans were interrupted by the outbreak of World War I, when he was drafted to serve in the German army. After the war, Alsace once again became part of France. Kastler was not fluent in French, but nonetheless he applied to the prestigious École Normale Supérieure in Paris. Although he failed the entrance examinations, he was admitted as part of a special program to help reintegrate Alsatians into French culture. There he first learned about quantum physics and the Bohr model of the atom, and encountered Arnold Sommerfeld’s book on atomic structure and spectral lines, which would have a profound impact on his own research. He also met and married Elise Cossett, a former student there who became a secondary school history teacher.

He received his PhD in physics in 1936, and went on to teach at various universities over the next several years, including the University of Bordeaux. The light teaching duties meant he had more time to devote to his research in atomic fluorescence and spectroscopy. The Second World War broke out in 1939, and by 1941, the Germans had occupied Paris. At the invitation of a colleague, Georges Bruhat, Kastler returned to the École as a faculty member, and as director of its nascent Hertzian spectroscopy group (later renamed the Laboratoire Kastler-Brossel in honor of Kastler and his graduate student, Jean Brossel). He would remain there until his retirement in 1968, when he became director of research at the National Center for Scientific Research (CNRS).

Kastler was particularly intrigued by how atoms could jump to higher discrete energy levels and then emit specific wavelengths of light as they returned to their ground states, producing a telltale pattern of spectral lines. For instance, in 1937 he studied the luminescence of sodium atoms in the upper atmosphere, demonstrating that the mechanism for this optical resonance was solar radiation. He also built upon prior research in the observation of the polarization of such fluorescence — known to be affected by magnetic fields — by carefully delineating the relationship between an atom’s spatial orientation and how its radiation is polarized.

This was an area of great interest to many physicists, but by the time Kastler undertook his research, the field had encountered a significant obstacle: The hyperfine spectral lines were so closely spaced that the usual optical and magnetic techniques used to probe the energy structure of atoms failed to yield measurements of sufficient precision.

During the war, French scientists were isolated from much of the world’s research community, but they could send graduate students overseas for study. Kastler sent Brossel to MIT to work with Francis Bitter. It proved an astute move. Brossel returned with an idea for combining optical resonance with magnetic resonance to study the excited states of atoms, gleaned from the work of I. I. Rabi, among others, who had used Hertzian resonances to calculate the magnetic and electrical moments of magnetic nuclei.

Eventually Brossel successfully used such a “double resonance” approach to study the excited states of the mercury atom. In double resonance, polarized light tuned to the frequency of an atomic transition populates the sublevels of this transition unequally. Applied microwaves or radiofrequency can then induce Hertzian resonances between the sublevels.

Concurrently, Kastler’s scattering research led him to propose, in 1950, an optical pumping method to excite the energy states of the atoms. As they returned to their ground states, the atoms would emit light waves. It proved a useful method for supplementing double resonance. Charles Townes and others later adapted optical pumping to create the foundation for the laser, since the technique produced such intense narrow beams of the same wavelength. (In a laser, the atoms or molecules of the lasing medium are “pumped” by the action of light or electricity.) Optical pumping techniques led to highly sensitive magnetometers and atomic clocks.

Kastler won the 1966 Nobel Prize in Physics — the first French citizen to be so honored in 37 years — “for the discovery and development of optical methods for studying Hertzian resonances in atoms.” The following year, on October 13, 1967, the journal Science published a review article by Kastler, based on his Nobel lecture.

Kastler also had interests outside of science. He wrote poetry in German, even publishing a volume of his work in 1979, and served as chairman of Action Against Hunger. Perhaps because he lived through two world wars, in military-occupied regions, he was a powerful advocate for peace and nuclear non-proliferation, staunchly opposing the French presence in Algeria. Such opinions were not universally popular: Right-wing extremists once bombed his apartment. Yet he died peacefully on January 7, 1984, at age 81, on the French Riviera in Bandol, France.