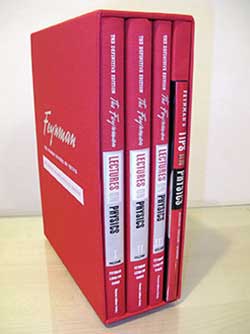 The California Institute of Technology in conjunction with the Feynman Lectures Website recently completed a years-long effort to upload the entire set of Richard Feynman’s classic Lectures on Physics for the public to access for free. It is the first time the popular physics texts are available online for free in their entirety.

“I became aware of the many eager young minds who could benefit from reading [this set of books], who had heard of it and wanted to read it, but who had no access for economic or other reasons,” said Michael Gottlieb, editor of the Feynman Lectures on Physics. “At the same time I was becoming aware of the growing popularity of horrid scanned copies of old editions…that were circulating on file-sharing and torrent websites. A free-to-read high-quality online edition was my proposed solution to both problems.”

The website reproduces the three volumes, including all the equations and diagrams. The first volume, Mainly Mechanics, Radiation and Heat, was first uploaded in September 2013. The last one uploaded was actually the second of the three volumes, Mainly Electromagnetism and Matter, which was posted in December 2013.

Richard Feynman, along with Robert Leighton, Victor Neher, and Matthew Sands, first developed the lectures in the late 1950s at Caltech. They wanted a way to introduce undergraduate students to “modern” physics topics, like relativity, atoms, nuclei, and the fundamentals of quantum mechanics. It was an offshoot of a broader movement after Sputnik to modernize the physics curriculum in universities.

Feynman taught the complete course only once from 1961 through 1963. His standing-room-only lectures were full of undergraduates as well as graduate students and professors who snuck in. All of his lectures were audio-recorded, and most of his blackboards were photographed.

The following year, The Feynman Lectures on Physics was first published. They have been a huge success in the physics community. Ultimately more than 1.5 million English copies have been sold, and the three books have been translated into more than a dozen languages. “Students and professional physicists have found them very useful and inspiring over the 50 years since they were first published,” said John Preskill, the Richard P. Feynman Professor of Theoretical Physics at Caltech and a contributor to the project.

Though inspirational to students and influential as to how modern courses have been structured, the lectures themselves are not often used as course materials.

“For close to two decades [The Feynman Lectures on Physics] was used as the primary textbook in Caltech’s two-year introductory physics course, but I know of only a few other universities that adopted it,” Gottlieb said. “It’s not an easy book to teach from, due to the advanced treatment of the material, Feynman’s idiosyncratic approach, and the fact that the book did not include exercises.”

Often they’re recommended as supplementary reading after basic concepts have been presented.

“They do have a sort of a unique perspective,” Preskill said, “They’re not necessarily the best resources for students learning college level physics for the first time, but they’re very insightful.”

He added also that in the next few years he hoped to incorporate the audio recordings and photographs into a bigger, interactive package for people to purchase. “Eventually we want to publish a version of The Feynman Lectures that includes multimedia content,” Preskill said.

Note: A corrected version of this story was posted on October 3, 2014. Owing to a editing error, the previous version misstated Michael Gottlieb’s affiliation and the final quote from John Preskill was misattributed to Gottlieb. This version clarifies that the project is a joint effort of the California Institute of Technology and the Feynman Lectures Website (operated by Michael Gottlieb and Rudolf Pfeiffer).