Next Steps for Energy Critical Elements 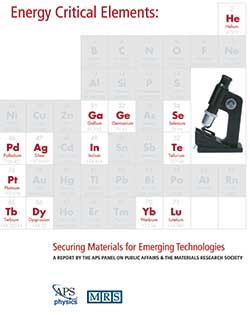 Three years after APS and the Materials Research Society issued a joint report on securing supplies of rare elements important to energy research, Congress has yet to act on the recommendations. However, federal agencies and some states have started implementing policies designed to shore up access to so-called energy critical elements.

The report highlighted 29 elements, mostly rare earth elements such as neodymium, terbium, and ytterbium, for which substitute materials are difficult to find and whose supplies could easily be threatened or cut off. They’re often used in wind turbines, photovoltaics and batteries. China is by far the biggest and in some cases the only supplier of many of these elements, but it has in the past imposed export restrictions and dramatic price increases, disrupting the supply lines to the US.

“There are possibly transformative energy technologies that could have a major impact on the climate future of the world that depend on chemical elements that are potentially in short supply,” said Robert Jaffe, a physicist at MIT who is chair of the APS Panel on Public Affairs and lead author of the report. (See the Energy Critical Elements executive summary web page)

Several bills have been brought forward in Congress to address these recommendations on a federal level, but thus far none have passed. The most recent, H.R. 1022 authored by Rep. Eric Swalwell (D-Calif.), failed on the floor of the House at the end of July. Ironically, it failed even though it garnered more than a hundred more yays than nays (with yays from both sides of the aisle). The bill was voted down because it was considered under a procedure that suspends the normal rules of the House, so it required a two-thirds majority to pass.

The bill came under fire from conservative groups who criticized the proposed government programs as market interference. “It was kind of brought about by the Heritage Foundation putting out some info and letting members know that they didn’t support the bill,” APS policy analyst Mark Elsesser said. “They viewed the bill as the government stepping in where private businesses could have done it themselves.”

The press release from the Heritage Foundation stated that “…rather than create an expensive new government program, Congress should deregulate the market for rare earth elements and energy critical elements,” and urged Congress to reject the bill. “Fortunately there have been other activities that have helped to further some of the recommendations in the report,” Jaffe said.

Since the report was published in 2011, the Department of Energy established the Critical Materials Institute energy innovation hub at the Ames Laboratory at Iowa State University. The Institute researches new ways to expand and diversify production of these elements and develops new ways to reduce waste and identify potential substitutes. Other researchers around the country, including Jaffe at MIT, have been devoting more attention to finding substitutes for these elements.

In addition, the budget at the U.S. Geologic Survey’s Mineral Resource Program has stabilized, ending a several-year decline in funding. The program tracks the supply lines and sources of a wide range of materials, including the so-called energy critical elements.

“We collect information on a variety of minerals and commodities that are used for a variety of different things,” said Lawrence Meinert, the program’s coordinator.

“We look at the whole range of elements of the periodic table in terms of tracking them.”

Much of the data collection that the APS report recommended would be an expansion of what the program already does, and Meinert said that the report was helpful in highlighting improvements to the program. He added that the proposed legislation would have allowed the program to further ramp up its data collection and analysis. “The report did a very good and accurate job of assessing the situation and identifying where the USGS and other agencies can contribute,” Meinert said.

APS has also started working more at the local level to improve the recycling recommendations of the report. Recycling is a promising method to recover rare earth elements, because they’re usually found in higher concentrations in recycled consumer electronics than in natural ores. “Because we’ve seen some stalls in Congress,” Elsesser said, “our office has started taking a state approach.”

For example, Elsesser has been working with the Michigan legislature on preparing a bill that would offer incentives and other requirements to promote more electronics recycling in the state. “We’re looking at hopefully introducing a bill in the state and having it focus on cell phone recycling,” Elsesser said. “We’re looking for sponsors of that legislation going forward.” He said the aim is to get the cell phone recycling rate in Michigan above the state’s goal of thirty percent, and he hopes to have some kind of legislation introduced in the fall, election permitting.

Though efforts to shore up the supply chains of these elements have started moving forward since the publication of the APS report, Jaffe said that the lack of federal legislation is an obstacle. “I think that it’s baby steps,” Jaffe said. “We’re living in an age when a lot of these energy and materials issues are of critical importance and these steps are in general not ones that are going to have a significant impact.”

He added that given the current political climate, he was not optimistic that Congress could pass a bill that did much more than ensure the stewardship of information about these materials. Though it seems that federal funding for significantly more research into these issues is unlikely in the near future, having scientists discuss potential supply problems and developing alternatives individually could start to change the attitudes of lawmakers over the long run.

“I think that kind of grassroots activity could raise consciousness and develop real security with respect to these elements,” Jaffe said.