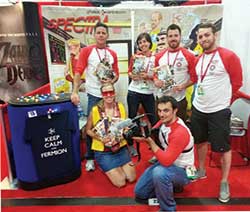 APS Outreach team at the 2015 Comic Con in San Diego.

Mini-Grant Program
The successful Outreach Mini-Grant program will have more funds to distribute thanks to an NSF award. APS will award grants up to $10,000 to projects designed to engage and excite the general public. In the past, roughly five proposals have been funded annually, but thanks to additional funds provided from NSF we will be able to fund eight to ten proposals in this round. Proposals are due on December 14, 2014. Visit the APS home page in early September for the official Request for Proposals.

Comic-Con
On July 22nd APS Outreach made its fifth trip to Comic-Con International, the world’s largest pop culture convention. We spent five days handing out roughly two tons of our popular comic book series, Spectra, about a young girl who discovers she’s a human laser, and must use her powers to fight the forces of evil. We had many returning fans and booth groupies who were excited to see our newest issue, Spectra’s Quantum Leap. You can read about the team’s Comic-Con adventures on the Physics Buzz blog and can read the comics on PhysicsCentral.

SpectraSnapp App
We are happy to announce that our popular SpectraSnapp iPhone app will be available for Android phones and tablets on September 1. SpectraSnapp uses a simple phone attachment to turn your camera into a spectrometer. This app has been used by K-12 teachers, lab instructors, and kids to learn about light and spectra. Check back at PhysicsCentral to get the app.

PhysicsCentral
PhysicsCentral, the APS outreach website with fun physics for every age, passed a milestone this month, hitting over 200,000 “likes” on Facebook. We are excited that our traffic continues to increase, now hitting an average of 100,000 hits a month with over 175,000 pageviews. PhysicsCentral has everything from at-home experiments for kids to a blog enjoyed by the general public and physicists alike. This month’s posts included a very popular review of Star Trek technology and how today’s technology measures up. It is also home to our comic books, the PhysicsQuest program, and our popular Science off the Sphere video series featuring astronaut Don Pettit. Follow us on Facebook or Twitter and keep up to date on our newest content.