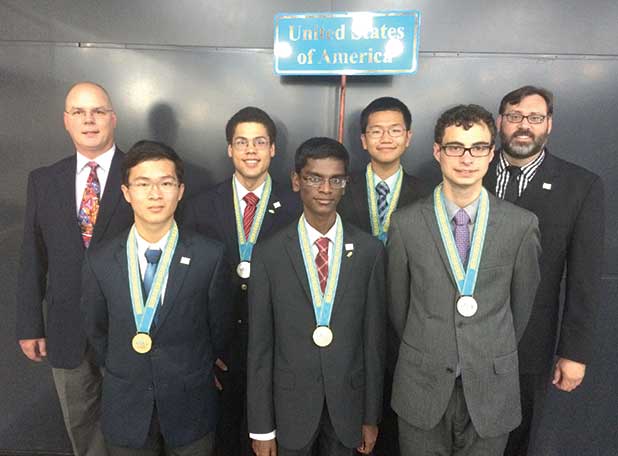 The United States tied with four other nations to place fifth overall at this year’s International Physics Olympiad. China, South Korea, and Taiwan tied for first place, with Thailand placing fourth overall. The national rankings are unofficial standings, and reflect the number of gold, silver, and bronze medals students on each team received in different categories.

Since 1967, the Olympiad has been an annual competition for high school students from around the world. The students vie to answer a series of theoretical and experimental physics questions. This year eighty-six nations sent “traveling teams” of five students for the June 13-21 competition in Astana, the capital of Kazakhstan.

The U.S. traveling team was made up of Calvin Huang, Vikram Sundar, Kevin Fei, Mike Winer, and Alex Bourzutschky. They were selected from the full U.S. team of nineteen that trained at the University of Maryland and the George Washington University earlier this summer. Huang, Sundar and Fei each won gold medals, and Winer and Bourzutschky won silver.

Both the theory and experimental questions covered a broad range of physics topics. “Problem one was a smorgasbord collection of three smaller problems: a particle sliding in a hoop, a bubble oscillating in a vacuum, and a tricky [inductor-resistor] circuit,” said Paul Stanley of Beloit College, the team’s academic director. ”Problem two was an application of the van der Waals equation to calculate bulk properties of water. Problem three was a mathematically oriented approach to plasma physics.” He added that the experimental question concerned the transmission of light through uncommon materials.

When not competing, the students went on several field trips to sites around Astana, including a recreated 18th century Kazakh village at Burabay, the Arlan Resort Area, and a trip out to a nearby lake to participate in a number of local cultural ceremonies. The five U.S. students stayed in the dormitory at the recently founded Nazarbayev University.

The U.S. team is organized and run by the American Association of Physics Teachers. The American Physical Society helps sponsor the team.