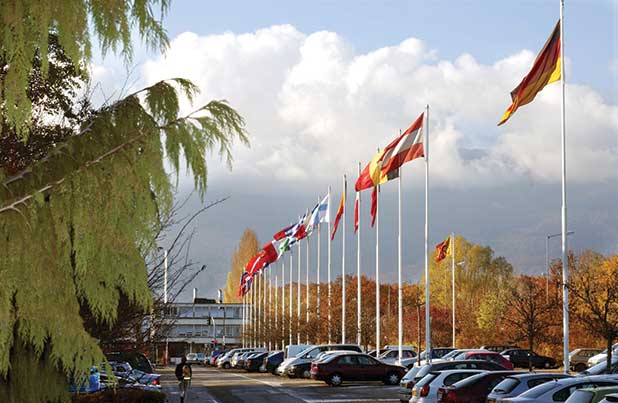 Flags of member nations at CERN.


Europe’s premier physics lab is turning 60 in September. Its discovery of the Higgs Boson in 2012 was only the most recent highlight of its six-decade history.

At the same time, by bringing together 21 member countries and 7 observer nations, the European Organization for Nuclear Research (CERN) set an example of a successful international collaboration. Other big international physics projects like the International Linear Collider (ILC), the International Thermonuclear Experimental Reactor (ITER), and the Synchrotron-light for Experimental Science and Applications in the Middle East (SESAME) have all borrowed elements of CERN’s governing structure. “The governance model is one of the things that really makes CERN work,” said James Gillies, Head of Communication for CERN. “There are several more [such collaborations] now, and they’ve based their models on CERN.”

CERN was first conceptualized in the late 1940s as Europe was still recovering from World War II. Fascism and war had depleted most of the continent’s resources and many of the top scientists had fled to the United States. “The war had stopped, but it was a continent that had suffered quite a long period of turmoil,” Gillies said.

French physicist Louis de Broglie first proposed a multi-national European lab in 1949. After years of lobbying spearheaded by Isador Rabi, a Nobel laureate and the U.S. envoy to UNESCO, 12 European nations came together to sign the convention officially forming CERN in 1954. “The physicists needed CERN to work in order to be able to participate in frontline particle physics — so they felt compelled to make it work,” said Christopher Llewellyn Smith, who was director of CERN from 1994 to 1999.

At the time of CERN’s founding, the United States was emerging onto the global scene as a major leader in scientific research. European physicists wanted to compete, but no single country could seriously compete with the emerging superpower. “If Europe wanted to do high energy physics, the only way is by having governments collaborating with each other because it’s such an expensive field,” said John Krige, a historian at Georgia Institute of Technology who specializes in the history of CERN. “Pooling resources is the best way.… That’s the only way they’re going to be able to afford it.”

Being a fundamental physics lab inherently played a big role in pushing competing nations to work together. “The goal is the same, and it’s very clear that it is fundamental research,” said Maria Spiropulu, a physicist at Caltech and vice-chair of the APS Forum on International Physics. “That alleviates a lot of the conflict…because we’re all going towards the same fundamental goal and the same dream.”

However, a shared mission alone can’t sustain a laboratory for sixty years, and CERN’s administration is designed to be somewhat flexible and accommodate the member states’ scientists and politicians as much as possible. The ultimate authority for the laboratory rests in CERN’s governing council. Each member state gets two seats on the council, one reserved for a scientist and the other reserved for an administrator. “The governing structure was pretty hands-off,” Llewellyn Smith said. “There was never a tendency to micromanage; they let the CERN management just get on with it.”

Countries contribute to a central fund for the infrastructure of the lab as a whole. However, while the infrastructure of the lab comes from the pooled fund, the experiments do not. This means that while the Large Hadron Collider (LHC) was built by CERN using the money contributed to the central fund, the four giant detector experiments were funded, designed, and built by independent collaborations of nations. This way, if one falls behind, it doesn’t necessarily mean the entire project will suffer.

Most of the countries that contribute to the organization have been strategic about where the funding for the lab comes from in their domestic budgets. “For some governments, the infrastructure of CERN is funded from the foreign policy budget, not the science budget,” Krige said. “This means that it doesn’t touch the science budget.” He added that Britain is one of the few countries to use money from its science ministry. Doing so pitted scientists against each other over whether to support the international program or domestic research. “That led to incredible fights in Britain on how much it can afford for CERN,” Krige said.

It’s a fight that has been playing out in the United States over ITER. Funding for the U.S. contribution to the giant fusion reactor comes directly from the Department of Energy’s Office of Science, often at the expense of domestic programs.

Of all the current international physics projects under development now, ITER receives the most comparisons to CERN, but the fusion project is years behind schedule and projected to be billions of dollars over budget. “It tried to [carry out] the dream where there is an equal division of the responsibilities,” Spiropulu said. “The politics became more important than the project.”

The construction of the reactor was split up among the 35 contributing nations. Different nations picked different components to build based largely on national interests, rather than efficiency. At the same time, ITER’s central management gave the project little flexibility to adapt easily to design changes and delay.

“ITER is being built in a way that is closer to the way the LHC experiments were built than the way the collider itself was built,” Llewellyn Smith said. In addition, because the fusion reactor is essentially a single giant experiment, all the components need to be in place and ready before it fires up. “A major problem [with] one of the members will immediately impact the project as a whole,” said Michel Classens, Head of Communication for ITER. “Little by little all of the parts of the reactor will arrive here.”

However the project that is most similar to CERN, both in terms of organization and intent, is SESAME. The project to build a synchrotron light source in Jordan has brought together nations normally hostile to one another, including Israel, Iran and the Palestinian Authority [see APS News, Back Page, April 2014].

“SESAME is modeled on CERN conceptually,” said Llewellyn Smith, who is also president of the project’s council. “The SESAME statutes are modeled on the CERN Convention, as is the governance structure. They have worked very well in the circumstances.” He added that both collaborations aim to bring leading science facilities to regions where these were lacking and to foster international cooperation in the process.

The ILC is in the very early stages of development. It too is using CERN as a guide. “For something like a new international collaboration, this serves as a well-made model that all we have to do is tweak,” said Barry Barish, director of the global design effort for the ILC, and former APS President. “The process for the ILC is much more like the experiments at CERN.”

He added that one of the big differences between the ILC and ITER is that the governing structure and construction agreements are being decided earlier in the process, before a final site has been chosen. “What it has enabled by forming the same kind of CERN-like collaborations at an early stage is the ability to make decisions both technical and scientific,” Barish said. “The hope is that we all own it, and as it moves forward, the problems that are inevitable can be dealt with.”