Biometrics as a Pathway to Human Rights 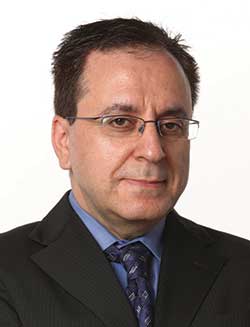 For as long as he can remember, Joseph Atick knew what he desired to do with his life. “I wanted to harness nature in the service of mankind,” he says. Physics and mathematics provided an elegant solution, because “there is something about the rigor of math that connects you with reality, and I wasn’t interested in being separate from reality. In physics, there is no room for fudging. It’s as platonic as it can be.”

Atick is one of the foremost authorities in biometrics, the use of computer technology to identify individuals. He has spent his career studying the brain and how we see, motivated by a childhood mishap that injured his eyesight. Considered a pioneer in facial recognition and identity technologies, today he concentrates on the appropriate and fair application of his technological breakthroughs through public policy and diplomacy consulting. He circumnavigates the globe on behalf of the World Bank and the United Nations to collaborate with governments to ensure that identification systems are adopted in such a way that they safeguard individual human rights and privacy.

Atick pursued his purpose early. At the age of eight, he established a small laboratory under the family house where he conducted experiments in Newtonian mechanics. He viewed his ability to be able to predict how inanimate objects behave as a “source of power,” he explains. “I was seduced by it and became more interested in explaining nature than playing football.” By 15, he had written a textbook on mathematical methods for modern physics. And at 16, he audaciously called the chairman of the Stanford University physics department and asked if he could be admitted as a graduate student, despite the fact that he had dropped out of high school to learn on his own and had not even attended an undergraduate institution. “I know you may hear from crackpots all the time,” he recalls saying. “But please allow me to explain the particulars of my case.”

As it turned out, Stanford nuclear physics professor Stanley Hanna already knew about the prodigy and had shared an anecdote about him with the chairman just a few weeks prior to the call. “I was surprised he didn’t hang up on me, but Hanna said ‘I’ve heard about you. I know your book. When can you come and meet with me to discuss this?’”

Since Atick didn’t have a driver’s license or a credit card, he persuaded his mom to do the “favor” of accompanying him to Stanford from Miami, where they were living, so he could meet with faculty and the dean. He was offered a non-degree spot in the graduate program, which he was assured would be converted to a degree-granting opportunity if he could prove himself, both in physics and other subjects that one typically learns as an undergraduate, such as geography, languages, and literature.

For a kid born in Jerusalem who was also a poet, he breezed through the qualifier, taking the top spot amongst his “peers.” “It was a relief after the qualifier since there was this recognition that I was in the program fair and square,” he notes. He got busy on his thesis, earned a master’s at 17, joined the theoretical physics group at SLAC conducting research on particle physics, and under the aegis of Leonard Susskind, was awarded a doctorate in mathematical physics around the time he was finally able to legally imbibe and gamble.

The Institute for Advanced Study took note, and recruited Atick to pursue explorations into string theory, but something about the subject was not to his liking. “While I was honored and excited by what was going on there, I felt I was taking one step away from reality,” he says. “At Stanford, at least they were smashing things and testing theories, but at Princeton I began to question why we were doing this research. Aren’t we supposed to gain insights into nature to help mankind?”

String theory didn’t hold the answer, although Atick published quite a few seminal papers on the topic. On the other hand, neuroscience and computational biology, in their nascent stages at the time, not only captured his imagination, but also held the potential to more quickly aid him in his mission. A year after arriving at the Institute, he switched and began working in earnest on what became known later as computational neuroscience. He attracted a lot of attention in his newly adopted field, and soon Atick landed at Rockefeller University, which had invited him to head the computational neuroscience laboratory, an offer he accepted at the tender age of 27. Although he worked closely with the neuroscientists and biologists, his home department was physics.

“The week after I made associate professor, I resigned,” he says. “I wanted to reach that level to prove to myself that I could do it,” but once he had excelled there, he feared becoming trapped in complacency. However, Rockefeller’s president initially wouldn’t accept his resignation, and insisted he keep Atick’s resignation letter on hold for a year, should he decide to return. “I begged him to shut the door on that opportunity, because I didn’t want temptations. I did not want a bridge to the past,” he recalls. “And I walked out and founded a company in information theory and the brain.”

And that was all it took. From there, Atick’s enterprise, which originally focused on how the brain handles patterns, and whose early clients were financial institutions, soon took on a life of its own, as it expanded to pattern recognition of humans. His company, Visionics Corporation, had an “open door policy for hiring physicists,” he shares, and was one of the earliest enterprises devoted to facial pattern recognition and biometrics. It went through various mergers and acquisitions and name changes, and when he sold it in 2010, it had reached 1400 employees.

His foray into human population identification management was clearly a commercial success, but Atick had his sights set on something bigger. “Identification is an important part of international development,” he says. “Digital identification is necessary for the efficient delivery of government services, and for helping people participate in a modern society and claim their fair share of rights and entitlements without fraud and discrimination.”

In certain parts of the world, where borders are porous and virtually invisible, populations move back and forth from one country to another for services and for voting. As a result, economic and election fraud are rampant. “With no real mechanism for accounting for your people, you cannot have a realizable democracy,” he implores. In fact, “I would claim that without reliable identification, it is difficult to exercise basic human rights.”

Around 40% of the people in the world don’t have birth certificates, he says, so biometric technologies that identify a person by iris, face or fingerprints “[become] a clear administrative mechanism for making the delivery of services more efficient and for establishing the uniqueness of individuals.” With rigorous digital identification programs in place, entitled services and opportunities can be delivered, such as the ability to apply for government aid, open a bank account, obtain healthcare, receive a passport and vote.

As Chairman and Founder of Identity Counsel International, Atick assists organizations such as the World Bank and the UN with these issues, dividing his time between New York, Paris, and lately, Africa.

One of his major successes has been the implementation of a national multi-biometrics system in India, which uses a combination of technologies to “resolve one human out of a billion,” he notes.

Today, 95% of his time is spent on policy, because “technology is a commodity now,” he says. “I help build strategies for responsible identification management to accelerate national development.” Of course, privacy is at the forefront of his mind. “The negative side of any technology always exists, so the very first set of questions I ask when I go into a country is related to their constitution, data security, and respect for human rights,” he says. “Putting powerful technology in the hands of dictators is something we never want to do, and as a consequence we go into a country and ensure the appropriate safeguards are in place, in the first place.”

The physicist recognizes the double-edge of his biometric innovations. “A knife can be used to harm someone, and yet we need it to eat,” he concedes. “I am the first person to call for a ban on biometrics until freedom and liberty are guaranteed. The last thing I want to do is go to my grave thinking that I have enabled a police state instead of liberating people.” To further this objective, he co-founded the International Biometrics & Identification Association in 1998, which “promotes effective and appropriate use of technology to determine identity and enhance security, privacy, productivity, and convenience for individuals, organizations, and governments worldwide, including biometrics, one of the technologies playing an increasingly important role in identity management.”

“Having been trained as a physicist is an enormous asset,” he shares. His scientific mastery provides a critical foundation upon which to advise on technology usage with credibility and “you have the capacity to look at multidimensional problems,” of which policy is one example. “If I had to do it again, I would do it exactly the same way — I would start with physics because it arms me with tools that allow me to tackle any problem that comes my way with confidence.”

As for the future, Atick is tantalized by where the technology is headed, especially in the age of mobility. We can expect more and varied multi-biometric systems to be employed that identify people by their voice, facial structure, eyeballs, finger- and handprints, and even the maps of their veins, he says, all of which can serve humanity for the better. “My dream is to have a world without borders, and technology can enable that.”

Alaina G. Levine is the author of “Networking for Nerds” (Wiley, 2014) and President of Quantum Success Solutions, a science career and professional development consulting enterprise. She can be contacted through www.alainalevine.com, or followed on twitter @AlainaGLevine.