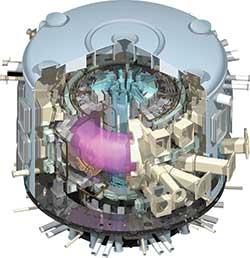 The U.S. Congress is divided over the future of U.S. contributions to the world’s largest fusion experiment, the International Thermonuclear Experimental Reactor (ITER), located in the south of France. The Senate Appropriations subcommittee on energy and water development voted on June 17 to zero out funding for the troubled ITER project, while the House passed a version of the same bill that would increase its funding. However the president has threatened to veto the House’s bill for other reasons and the Senate has pulled its bill from consideration, leaving the future funding of the U.S. contribution to ITER uncertain.

ITER is building a thirty-meter tall tokamak in Cadarache, France. The aim of the international collaboration is to achieve ignition, the point where more energy is generated by its fusion reactions than is put into running it. The project is a major stepping-stone towards generating clean fusion energy, but it’s been troubled for years by serious budget overruns and long delays. According to a recent U.S. General Accounting Office report, the project's completion date is 20 years behind schedule, and the U.S. contribution has swelled by nearly $3 billion.

Senate Appropriations Committee members on both sides of the aisle have long been critical of U.S. contributions to the program. “We’ve withdrawn funding for the program,” said Sen. Lamar Alexander (R-Tenn.). “It hasn’t shown the progress it should. An audit by distinguished scientists told us that.” In addition, Sen. Dianne Feinstein (D-Calif.) has also been one of the program’s harshest critics. The Senate committee attempted to zero out funding for the program last year as well, but it was restored when the House and Senate bills were reconciled.

On the flip side, this year’s Energy and Water bill that passed the House on June 10 authorized the Department of Energy (DoE) to contribute $225 million to the project in direct cash and construction of parts. This is $75 million above what the White House asked for in its budget request, and matches the funding level used as a baseline by DoE to project costs. A lower budget would likely increase costs in the long run and further delay the project.

However, the House bill did not give ITER a totally free pass. It included language stipulating the project would receive U.S. funds only after its governing council implements management reforms laid out in an independent internal assessment carried out late last year. These recommendations include reducing the bureaucracy of the project, developing a realistic project schedule, and making the director general more accountable.

Support for ITER in the House also flows from both sides of the aisle. At the July 11 meeting of the House Subcommittee on Energy, both Republicans and Democrats were generally supportive of continuing to fund ITER.

“Fusion holds the promise of providing a practically limitless source of clean energy to the world,” said Rep. Eric Swalwell (D-Calif.) “The support of fusion energy research is something that is critical in this day and age.”

“The Obama Administration has chosen to underfund ITER in its fiscal year 2015 request,” Smith said. “Depriving the U.S. ITER program of the funds it needs to accomplish its goals is not good policy.”

The president said that if presented with the Energy and Water bill in its current form, he would veto it because it does not fund other clean energy technologies like wind and solar. The Senate is unlikely to resubmit its version before the November elections.