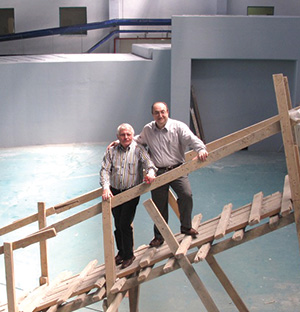 When we think of large-scale international scientific facilities, CERN comes to mind as a prime example. The discovery of the Higgs boson captured the imagination of the general public worldwide. However, this particular success of CERN may overshadow the success and importance of many other national and international large-scale facilities, which are changing the scientific practice and discourse in a fundamental way. Several examples come to mind, including established photon and neutron sources in Europe, and notably the first synchrotron light source in the Middle East, SESAME in Amman, Jordan. Furthermore, many of the national facilities, such as the one I work at in the US, have considerable international participation and collaborations that make them truly international facilities. All have been responsible for big changes in the way scientists work with each other.

Multidimensional in many ways
Research teams that form around these billion-dollar facilities almost always are multinational and multidisciplinary, bringing in their talents, skills and knowledge obtained in different parts of the world. Large accelerator facilities are typically conceived and designed by the users of the previous generation machines. Planning for such facilities involves international collaboration of hundreds of scientists, engineers, representatives of funding agencies, diplomats, and politicians. It takes a decade or two from the original idea to operation, but these projects are almost always very successful, despite initial difficulties. Another common aspect of these facilities is that they exceed the performance of their predecessors by several orders of magnitude in terms of number of photons, neutrons, protons, or ions on the sample, in terms of their frequency range, and in terms of other aspects like spatial and temporal coherence, pulse duration, and polarization.

Several factors play a role in the success or failure of these facilities. Each new generation machine has to be built quickly enough so that there is continuity between the young and the old researchers, and yet late enough to capture substantial technological and theoretical advances that have taken place. There is a need to have a wide and competent scientific user community to invent new techniques and explain the scientific and societal needs for a new generation machine. Along the way, old rivalries, perceived national competition, and the sheer ambition and determination of a few individuals all influence the process.

Reaching consensus about international facilities
The need for new-generation synchrotron radiation and neutron sources has been articulated several times in recent years in scientific case reports [1-4], as well as in national strategy documents [5-6]. However, to reach a consensus about what kind of machine to build, there is an interesting and complex process, which is not always transparent. The facility is going to be defined by the potentially available financial resources, technical competency of the construction team, and the perceived needs of the scientific community that will use the instruments.

Here, the scientific discourse is quite interesting. The specifications like the electron-beam energy, photon flux, and so forth surely generate heated discussion among representatives of the different fields and different generations of scientists. If this discourse is given sufficient time and proper resources are provided, a healthy mix of parameters emerge, ensuring the future success of the project in terms of its scientific impact and potential reach of the targeted user community. This implies significant research and development funds should be made available to explore the outer boundaries of several key experimental methods and accelerator components, with strong international participation.

Parallel to the specification process, there are the funding struggles. In many countries, multiple agencies and several layers of political figures become an integral part of the funding cycle, which may last for several years. While everybody involved claims to be pulling in the same direction, there are strong counter currents, which are not obvious at the first glance. Competition between different branches of governmental agencies, and between different states and provinces surface at the most critical times which can provide suspense that only rivals major Hollywood thrillers.

Different approaches
Two recent examples I have encountered are the Canadian Light Source (CLS) and the synchrotron radiation source in the Middle East, SESAME. The CLS had its origins at a beamline called “The Canadian Synchrotron Radiation Facility (CSRF)” at Synchrotron Radiation Center at the University of Wisconsin-Madison, as well as at a local facility called Saskatchewan Accelerator Laboratory (SAL), in Saskatoon. Through a grass-roots international collaboration, CSRF grew from a single beamline in 1983 on a machine called Tantalus, to a three-beamline complex on a new machine called Aladdin (both closed now). For 22 years (1983-2005), CSRF trained a generation of Canadian scientists that later on laid the groundwork for CLS. This was on the heels of previous work at Stanford in the late 1970s building an Extended X-ray Absorption Fine Structure (EXAFS) station. Combined with the engineering talents of SAL a state of the art facility was to be built in 1999 in Saskatoon.

CLS was partially funded by the Canadian Foundation for Innovation, together with many different provinces of Canada, Western Diversification funds, and corporate contributions. However, not only were the pledged funds inadequate, but the delivery schedule was dependent on the decision-making bodies in each of the provinces. This complex web of funding sources made CLS a household name in many different parts of Canada, but certainly the managers at the time grew a lot of white hair. Today, CLS stands as an excellent example of the perseverance of its founders, as well as Canada’s genuine embrace of international participation in management, operations, and supervision.

As for SESAME, the situation was far more “interesting” because the collaborating countries had and continued to have distinctly different foreign policy priorities. To mention the countries of Iran, Israel, Palestine, Turkey, Egypt and Jordan in one breath explains why the characterization “interesting” is an understatement. The ebbs and flows between 1999 and 2013 have left many participants who wanted to have a positive outcome exhausted, and yet SESAME is well and alive today. It is expected to have X-rays produced in 2016 or shortly thereafter. The cooperative spirit of scientists and engineers was communicated to decision makers, diplomats and politicians in each of the respective countries through the efforts of many individuals coming out of the woodwork, whose existence was not obvious at the beginning, and it is a remarkable scene to observe.

Fostering new interactions
However, this is just the beginning. As the facilities are funded and the construction starts, so does a new discourse: formation of research and construction teams, preparation of funding proposals, choice of technology and methods of building the instruments, choice of detectors and software, choice of exact dimensions and location experimental stations, choice between competing optical schemes, choice of vendors from all around the world, and acquisition of necessary help from the central facility in a timely manner. As a participant several times during my career, I now realize that not only is it the most fun part, but also it is the most painful part of scientific research. Friendships are made and lost, and new and unexpected methodologies are introduced to varying degree of success. Then comes the period of “User Science” for about two or three decades. The instruments evolve and change, sometimes completely; the seeds of the new-generation machines are sowed.

There are also benefits to the culture of science. On the experimental floor, the most valuable contributors are the ones who actually know what to do and how to do it. Oftentimes, this may even include graduate students and postdoctoral associates, which makes it truly a democratic process. This fact changes the discourse of scientific research where your effectiveness is not measured by longevity, rank, national origin or gender, but rather by your merits. It creates an interesting and very useful environment for everybody who is genuinely interested in the outcome, and makes scientific research a truly enjoyable experience.

International scientific activities promote understanding and friendship among people from different countries, religions, races, and even peace, as well as science. Scientists trained in these facilities become leaders of their own country after their return. In fact, some the best practices learned in these facilities migrate back to other countries. For example, the Super Photon Ring-8 (SPring-8) facility has adopted an international scientific advisory board, a first in Japan. Facilities like Advanced Photo Source (APS) in the USA, Electron Synchrotron Radiation Facility (ESRF) in France, SPring-8, and Positron-Electron Tandem Ring Accelerator (PETRA III) in Germany hold regular annual meetings to exchange ideas, and develop joint projects.

What I learned from working in a large scientific facility is that one needs a constant flow of well-trained scientists, engineers, and technical support, an engaged scientific user community that has a vested interest in the design and operation of the instruments, and efficient managers who are well versed in the field of practice. Equally important is the public support at the level of local mayors, congressmen, business leaders, and at the national and international levels, support of funding managers and law makers. This cannot be done by only national means. We need strong international participation to sustain these magnificent facilities of discovery and learning.

Esen Ercan Alp is a senior scientist at the Advanced Photon Source of Argonne National Laboratory. He will be chairing the Forum on International Physics in 2014.

2. A series of conceptual and technical design reports on EuroXFEL can be found at
http://www.xfel.eu/documents/technical_documents

3. Ultrafast Phenomena at the Nanoscale:  Science opportunities at the SwissFEL X-ray Laser:
http://www.psi.ch/swissfel/CurrentSwissFELPublicationsEN/SwissFEL_Science_Case_small.pdf