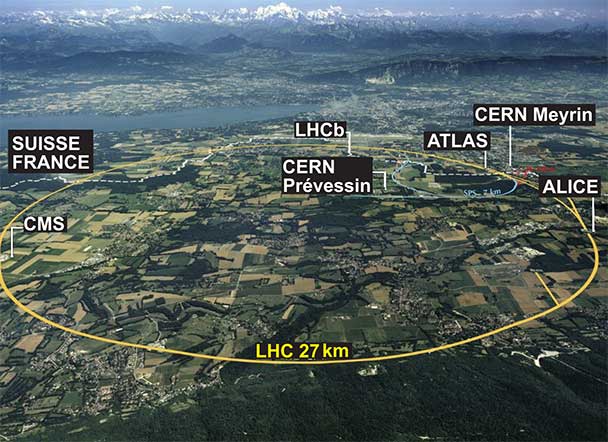 The big picture — CERN from the air, with the Alps in the background.


This month, the European Laboratory for Particle Physics, which straddles the Swiss-French border northwest of Geneva, celebrates its sixtieth birthday. CERN is the preeminent particle-physics institution in the world, currently emphasizing the study of collisions of protons and heavy nuclei at very high energies and the exploration of physics on the electroweak scale (energies where electromagnetism and the weak nuclear force merge). With brilliant accomplishments in research, innovation, and education, and a sustained history of cooperation among people from different countries and cultures, CERN ranks as one of the signal achievements of the postwar European Project. For physicists the world over, the laboratory is a source of pride and inspiration.

CERN is a very large, and highly cosmopolitan, research institution, with 2500 staff members, 600 Fellows and apprentices, and nearly 12,000 “associated members,” representing more than 110 countries. The 2014 budget is 1.1 billion Swiss francs ($1.2B). The United States has the largest participation among Observer states, with 1765 scientists drawn from 112 institutes. The European Commission and UNESCO also have Observer status, and in 2012 CERN became an Observer to the United Nations General Assembly.

The Creation of CERN
Recognizing the diminished state of European science at the end of the Second World War and the urgent need to rebuild trust among citizens of the continent, a visionary group of leading physicists conceived a European laboratory for subatomic research. Louis de Broglie carried their proposal to the European Cultural Conference held in Lausanne in December 1949. The notion gained momentum six months later at a UNESCO conference in Florence, thanks to a resolution introduced by I. I. Rabi that authorized UNESCO to “assist and encourage the formation of regional research laboratories in order to increase international scientific collaboration.”

By the end of 1951, UNESCO had authorized the creation of the European Council for Nuclear Research/Conseil Européen pour la Recherche Nucléaire. In short order, eleven nations signed an agreement establishing the Council and planting the seed for CERN. In 1952, the provisional council selected Geneva as the laboratory site. In mid-1953, representatives of twelve founding member states — Belgium, Denmark, France, the Federal Republic of Germany, Greece, Italy, the Netherlands, Norway, Sweden, Switzerland, the United Kingdom, and Yugoslavia — signed the convention establishing the organization, subject to ratification. Approval by the governments was complete on 29 September 1954, and CERN was born.

CERN Milestones
CERN’s research program is built upon particle accelerators, and it is by continuous innovation and systematic improvements that the lab has attained its world-leading status for the high-energy collisions of hadrons. The Proton Synchrotron (PS), commissioned in 1959, was one of the earliest alternating-gradient (strong focusing) synchrotrons. To this day, it is an essential part of the accelerator chain, delivering 28-GeV protons to its successor, the Super Proton Synchrotron (SPS). An outstanding achievement of the PS era was the 1973 discovery of interactions signaling the weak neutral current, a new form of radioactivity, in Gargamelle, a 4.8-m-long heavy-freon (CF3Br) bubble chamber. During the heyday of the PS, CERN pioneered colliding beams of protons in the Intersecting Storage Rings, which came into operation in 1971, eventually lifting the center-of-mass energy frontier to 63 GeV. The ISR subsequently was the test bed for Simon van der Meer’s ideas to produce dense beams by stochastic cooling.

The SPS, a “big machine” of its day, is a proton synchrotron 7 km in circumference accelerating beams up to 450 GeV that has been feeding a wide variety of fixed-target experiments for many years. The SPS was highly productive in many areas, notably neutrino physics, where it contributed to establishing quantum chromodynamics as the theory of strong interactions. Reconfigured as a proton-antiproton collider, it yielded the discovery of the W and Z bosons, the force particles of the weak interactions, in 1983, a decisive step toward validating the electroweak theory that was honored by the Nobel Prize to Carlo Rubbia and van der Meer.

The next great step was the construction of the Large Electron-Positron collider (LEP) in a 27-km tunnel that extends under the Jura mountains at a depth of 100 m. Beginning in 1989, LEP operated first as a Z factory with energies near 91 GeV, compiling a very detailed dossier on the weak neutral current. LEP moved on to higher energies where experiments validated the electroweak gauge symmetry in W-pair production and searched for the Higgs boson.

LEP ceded its place in the tunnel to the extraordinary Large Hadron Collider (LHC) and its complement of superb detectors, which began data-taking in earnest in 2011 for proton-proton collisions at 7 TeV. More than 10,000 people have participated in the design, construction, and execution of the LHC and the experiments it hosts. Many hundreds of studies covering a sweeping range of investigations have been reported in the journals. The ATLAS and CMS experiments have already reaped their first immense reward–the discovery of the Higgs boson. We can only imagine what surprises may await in 2015 and beyond, when the energy increases from 8 TeV toward the 14-TeV design energy and the number of events recorded grows by an order of magnitude.

CERN Today
A visitor arriving at CERN instantly feels a vibrant atmosphere of energy, optimism, confidence, and youth. The CERN cafeteria has been, for as long as I have known it, a place where you could meet anyone and discuss any sort of idea. It bustles with formal and informal gatherings, from highly technical discussions to sensitive diplomatic negotiations.

The laboratory sets for itself four aspirations: research, innovation, education, and bringing people together. The LHC program, which will run beyond 2030, is the core research activity. Beyond the central theme of proton-proton interactions, the LHC enables the study of heavy-ion collisions (Pb-Pb and proton-Pb). The lab is also the leading center of antihydrogen experiments, and hosts rare kaon decay experiments, rare-isotope studies, efforts for neutrino experiments, and more. Its theoretical physics group, which boasts a distinguished history, is the nexus of European theory and draws visitors from the entire world.

Complementing the laboratory’s long line of advancements in the enabling technologies for accelerators, CERN has led the conception and development of novel detectors applied first to particle-physics experiments and later to medical diagnostics and other applications. Georges Charpak’s invention of the multiwire proportional chamber, recognized by the Nobel Prize, heralded a revolution in experimental technique in which electronic signals supplanted photographic images. In information technology, CERN is famous as the birthplace of the World Wide Web and has been a leading force in the development of grid computing.

Many young scientists and engineers have had formative experiences as CERN Fellows. Some 2500 students are conducting PhD research at the LHC. Many of them will take jobs in industry, commerce, and government, or migrate to other scientific disciplines. The laboratory has for many years hosted a summer student program for recent graduates that blends lectures and practical experience. CERN jointly organizes advanced summer schools in particle physics in Europe and Latin America and collaborates with Fermilab on the Hadron Collider Physics Summer School. Schools in Accelerator Science and Computing are also regular features. Increasingly, CERN is engaging with teachers and school groups.

CERN’s status as an international organization gives it great latitude to welcome scientists and students from many lands, largely insulated from the vicissitudes of relations among governments. It is thus positioned to be a laboratory for the world. Going well beyond the original impulse to create a haven in which scientists from the European states could make common cause, CERN now hosts collaborations between scientists whose governments may be at loggerheads, or not even recognize the other’s right to exist. In the long run, uniting people and giving them the chance to accomplish something wonderful together can be a powerful force for world peace.

CERN in the Future
While a long life remains for the Large Hadron Collider–with a series of upgrades to the machine and detectors, to be sure — CERN has an obligation to itself and to the science to look further ahead by considering what instruments and exotic technologies will be needed to answer emerging questions. The Future Circular Collider study is looking into the scientific merit and practical aspects of a very large tunnel, perhaps 80 to 100 km around, that could hold a hadron collider with at least five times the energy of the LHC and possibly an electron-positron Higgs-boson factory as an intermediate step.

Particle physics and accelerator science have long been highly international undertakings, and are becoming more so. CERN, already a center for the world, is engaging with international partners to a greater degree than ever before. This year, Israel became the first non-European member state. The International Linear Collider and CERN’s Compact Linear Collider have joined forces in a Linear Collider Collaboration. The recent revision of the European Strategy for Particle Physics, for which the CERN Council is the steward, foresees possible contributions to an International Linear Collider in Japan and engagement in long-baseline neutrino-oscillation experiments in Japan or the United States. The overtures to the Latin American community show great promise. I hope that, before the lab’s next significant birthday, the United States will form an even closer association with CERN.

A Personal Word
I visited CERN for the first time more than four decades ago, as a fresh PhD. I was instantly made to feel welcome and was delighted to meet a new set of people whose experiences differed from mine and who thought about physics in different ways. Every visit is still a revelation. Uniting people to do science doesn’t make us all the same, but it can make us better scientists, and better people.

To the visionaries who imagined what CERN could become, to those who made it so, to the people and governments whose support made it possible, go my thanks and admiration. To my friends at CERN today, Happy Birthday! We have work to do together.

Author note: Chris Quigg is a theoretical physicist at Fermilab, and the author of Gauge Theories of the Strong, Weak, and Electromagnetic Interactions (Princeton University Press, 2013). He regards CERN as his second scientific home.