Telling the History of Physics Through Historical Places

By Calla Cofield and Michael Lucibella 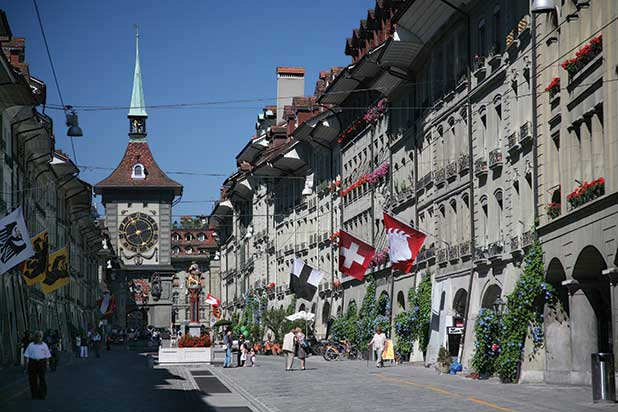 Places such as Einstein's house on the Kramgasse in Bern, Switzerland, offer opportunities to teach physics history.

Learning the history of physics has for years been centrally focused on the “what,” rather than the “where.” However, recently historians have started talking more about the locations where discoveries were made, especially to people who aren’t historians.

“It makes the history of physics much more real by being in a location where physics was done. You can kind of imagine what went on,” said Paul Halpern, a physics historian who put together a physics history tour of Washington D.C. “People can appreciate the history of physics by seeing the sites where scientists worked and lived. I think it makes history more vivid.”

Historians in other areas have long focused on the locations of significant events; science history has incorporated the idea relatively recently.

“Civil War courses take their students to Civil War sites all the time,” said Gregory Good, the director of AIP’s Center for History of Physics. “Any way you can get people into real locations and out of the classroom can help.”

He added that countries in Europe have been the most proactive about officially identifying and designating historic scientific sites.

“We’re slow with this in the States. The Europeans have been paying attention for a long time to historical sites connected to famous scientists,” Good said.

Gerd Kortemeyer, a professor of physics at Michigan State University, explored a number of these landmarks with his students. In 2008 and 2011 he led groups of 18 students on a five-week, physics-themed study abroad trip to Germany, Switzerland and Denmark.

The program focused on the birth of modern physics, between 1905 and 1945, and combined historical sight-seeing with a physics curriculum. Students were asked to learn about relativity, quantum physics and nuclear physics, while also visiting the places where physicists like Schrödinger, Heisenberg, Bohr and of course Einstein, laid the foundations for these subfields.

In Bern, Switzerland, which is littered with Einstein-affiliated landmarks, the group was granted access to the room where Einstein worked as a patent clerk at the Swiss Patent Office. The room, which is not open to the public, overlooks a train station, and inspired some interesting conclusions by the group.

“Some of our students had to read the original 1905 paper, and they kept talking about trains coming in and synchronization of time between trains,” said Kortemeyer. “Well, you look out of [Einstein’s] window there and you look out on the main train station of Bern…and you see trains coming by, so that’s what you write.”

Kortemeyer, a native of Germany, says he was turned on to physics history by a colleague years ago. As a teacher, he slowly realized how history could help convey the true nature of physics.

“In many respects I think with the undergraduate physics classes…we are doing physics a little bit of a disservice,” said Kortemeyer. While physics classes teach the students about mechanisms, formulas and laws, he says they “hardly ever convey what physics is really about.” He fears students will leave these classes thinking physics is only about putting numbers through different equations to get more numbers out. “And of course that makes them wonder why would anybody do that to themselves.”

The United States has a wealth of its own science history that students can draw from. Although the National Park Service’s National Register of Historic Places does list science-themed locations, professional societies in the United States have been the primary drivers for identifying and promoting them. IEEE has had a historical milestone center since 1982, the American Chemical Society set up their National Historic Chemical Landmarks program in 1992, and APS started its own Historic Sites Initiative in 2004. So far APS has installed 34 plaques at locations across the country, highlighting the locations where researchers made important discoveries.

Richard Kremer, a history professor at Dartmouth College, has been using the APS list to create a course that traces the history of US physics by way of its institutions. Dartmouth itself was designated an APS historic site in 2012, which first led Kremer to think about using the initiative to explore science history.

This year, he designed a ten-week freshman writing class, with each week focused on a different historic site. The sites include the Hughes Research Laboratory (now HRL Laboratories), Johns Hopkins University, Harvard University, MIT, and Bell Laboratories. The students in the class are the ones in charge of putting together each week’s lesson plans and required readings.

The class is designed for students to develop their research skills, so they’re put in charge of coming up with the class reading each week. Before each class, a different team of students compiles a list of different primary and secondary source documents to understand both the science of that week’s discovery and what Kremer calls “the institutional context,” or what it was like to work at a particular laboratory.

“This is new stuff for me and I’m learning things myself about the history of physics,” Kremer said. “At the end, the final exam that these kids are going to write is, ‘Is there a unique style of doing American physics based on these ten case studies?’”

Though the students don’t actually visit the sites in the course, other than Dartmouth itself, Kremer said that using a site to talk about a discovery gives the students a feel for each location’s intellectual history.

“The whole course is sort of a question as to whether location matters,” Kremer said.