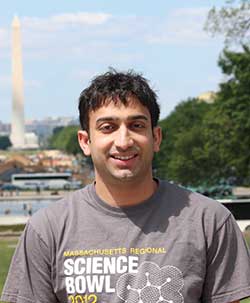 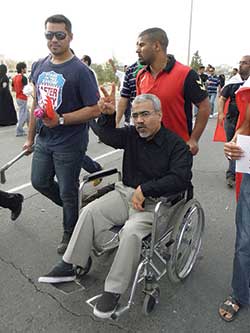 Abduljalil al-Singace, former professor of engineering at the University of Bahrain, was imprisoned for speaking out about the country's human rights record. The APS Committee on International Freedom of Scientists was involved in advocating for his release.

You might assume that young physicists, with their busy and focused lives, have never considered that science could be a tool for protecting human rights, and vice versa.

Many graduate students, myself included, have limited interaction with the world outside of academic groups or annual research conferences, which seldom discuss issues like human rights. Last summer, when I was offered the opportunity to represent APS at the American Association for Advancement of Science, Science and Human Rights Coalition (AAAS SHRC) as a student delegate, I eagerly agreed — despite the fact that I had very little insight as to what exactly that involved. Although I had dived headfirst into unfamiliar territory, I surfaced with not only a newfound awareness of my own responsibilities as a physicist in regards to protecting human rights, but also with the comforting knowledge that my peers and colleagues were willing to embark on this journey too.

Attending the Coalition’s July 2013 two-day annual meeting themed “The Right to Enjoy the Benefits of Scientific Progress and Its Applications” in Washington D.C., the heart of political activity, was a revealing experience for me. Throughout the plenary lectures and breakout meetings, immersed in the intersection of the social and natural sciences, I gained a deep, critical understanding of complex issues that relate science and human rights, such as: spreading knowledge through open-access science literature while preserving the viability of peer review, ensuring global access to new technologies, and securing other basic rights for all people through science and its applications.

A similar meeting in January of 2014, “Disability Rights and Accessing the Benefits of Scientific Progress and Its Applications,” opened my eyes to the ways in which science and engineering greatly influence the human rights of persons with disabilities. These sessions, while similar in nature to the 2013 convocation, focused more on how access to science and technology can affect the rights of people with disabilities, both positively and negatively. Some of the sessions also explored challenges faced by disabled students, research practitioners, and subjects of research as they seek various opportunities in the science and engineering fields. Now armed with a fresh appreciation for the role of science in protecting human rights, I felt more confident than ever in my ability to successfully fulfill my role as a Student Representative.

The primary role of the Student Representative is to raise awareness of the AAAS SHRC Coalition within his or her organization (APS in my case), with an end goal of increasing participation in the Coalition by students and young professionals. With this in mind, my first objective was to design and draft a survey of current graduate students and early career physicists who are members of APS in order to gauge their knowledge of human rights. The survey included both a range of general questions (such as what APS members think of human rights), and also specific inquiries (for example: their knowledge of specific cases and/or their thoughts on if and how they see the connection between physics and human rights). The survey was sent out to graduate students and junior members of the APS Forums on Graduate Student Affairs (FGSA) and International Physics (FIP) between December 2013 and January 2014.

The members of the Coalition were extremely heartened by the overwhelming response to the survey, which reflected that the majority of student members believe that human rights are important to science and scientific research. It was also encouraging that a modest number of responders replied that they were currently involved, or had previously been involved, in various human rights campaigns, Amnesty International, volunteer work, and demonstrations.

While these data are promising, the survey also suggested that physics graduate students and early career physicists do not believe that what they are currently learning in graduate school will help their generation of scientists understand how their work relates to human rights. When asked what aspects of this subject they were most interested in learning more about, a majority of responders indicated they were curious about the relationship between human rights and the application of physics as well as their personal responsibilities in protecting human rights as physicists. So clearly the desire to learn is there; but how can we make human rights a part of graduate students’ personal focus?

APS has long been an ardent champion of human rights, spearheading many human rights campaigns, projects and informational seminars. In February of 2011, physics graduate student Omid Kokabee, of the University of Texas at Austin, while on a visit home was imprisoned in Iran on accusations of “communicating with a hostile government” and “receiving illegal earnings.” APS has worked tirelessly to bring awareness and support to the Kokabee case, supporting petitions and lodging protests against his imprisonment. When asked if they were aware of the Kokabee case, many survey responders replied in the negative. Out of the few who recognized the case, a high percentage indicated that they had learned about the incident through APS efforts to bring awareness to the cause.

Survey takers were then asked to describe, in a few words, how the Kokabee case affected them personally. While replies were mixed, the underlying tone of responses were ones of empathy, anger, and concern. In particular, many international students were concerned for their own safety and rights while abroad or in their native country. A large majority of these reactions also portrayed a desire and motivation to participate and partner in efforts to sow seeds of human rights awareness among their peers to help mitigate future tragedies.

While the survey helped to momentarily spark interest and awareness in human rights in relation to science, the issue is still widely misunderstood. When asked to describe, in a few words, any individual cases of their fellow colleagues whose human rights have been violated or are at risk, a large number of responses cited complaints that were not applicable — i.e., failing to receive an extension on a research topic, problems with visa renewals, and other miscellaneous day-to-day grievances. It is clear that graduate students and alumni alike must continue to educate themselves and their peers in order to construct a well-rounded view of this issue.

This can be achieved by actively participating and engaging in efforts by organizations, such as AAAS SHRC and APS Committee on International Freedom of Scientists (CIFS), which are working at local or national level, in this field.

There are a variety of ways to get involved in the AAAS SHRC, from attending its meetings, which are free of charge for student and post-docs, to volunteering in their ongoing efforts. The Coalition recently held a competition to connect directly with students by organizing student poster competitions in its annual meetings. This competition, which asks students to submit a poster that should reflect their understanding on a given related topic, is open to undergraduate and graduate students interested in science and human rights.

CIFS, one of many APS advisory Committees, is charged with monitoring the rights of scientists. The Committee has been advocating for the release of Omid Kokabee as well as advocating for the rights of other scientists such as Abduljalil al-Singace, an engineer in Bahrain who has essentially been imprisoned for speaking out about Bahrain’s human rights record. CIFS is also collaborating with the APS Forum on Graduate Student Affairs to ensure that APS student members are aware of CIFS initiatives, so that if they experience any violations of their rights, they would see it as a platform for assistance.

To connect the hectic lives of graduate students to current APS awareness efforts, I feel it is important to bring human rights campaigns directly to campuses and curriculums to more successfully bridge the gap. With the insight gained from the survey responses, APS plans to develop activities, such as educational seminars at its upcoming annual meetings, aimed at engaging APS members in issues related to physics and human rights.

As my tenure comes to an end, I realize more acutely than ever that I have had an amazing opportunity to become part of a community with a laser-like focus on promoting a view of science inseparable from basic human rights. I would like to thank both APS and the AAAS SHRC for allowing graduate students, such as myself, exposure at such an early stage in their careers to the vibrant level of thought, energy, efficiency, and motivation found within an organization that is working diligently to make the world a better place. I also wish to thank everyone who participated in the survey for helping to build a strong foundation to construct future endeavors upon. I extend my hand to my peers in partnership so that we may all continue to learn and benefit from one another as we move forward in our mission to protect human rights as responsible physicists.

Acknowledgements: The author would like to extend special thanks to Jessica Wyndham (Associate Director, AAAS Scientific Responsibility, Human Rights and Law Program), Michele Irwin (APS) and Laura Dewhirst (psychology student at UMass Lowell) for their help and guidance in conducting the survey.

Vikram Singh Prasher is a graduate student in the physics department of the University of Massachusetts, Lowell. He served as the 2012-2014 Member-At-Large and newsletter editor for the APS Forum on Graduate Student Affairs and is currently APS Student Representative for the AAAS Science and Human Rights Coalition.