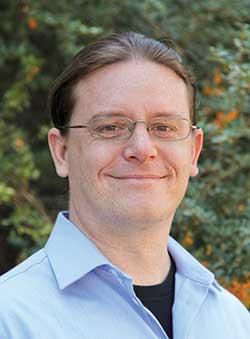 Photo by Pete Brown/University of Arizona

Robert Erdmann uses the tools of materials science and mathematics to reveal the secrets of paintings. 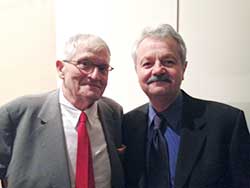 A painter’s canvas, like a career, can have many layers. And as one examines those strata, one begins to get a glimpse into the secret history of that painting. At museums and academic institutions around the world, physicists and other scientists utilize their technical expertise to not only uncover those secrets, but also preserve and conserve humanity’s most precious works of art.

At the Metropolitan Museum of Art’s Department of Scientific Research, physicists, chemists, materials scientists and other professionals work hand-in-hand with art conservators and historians to better understand the millions of items the institution houses, and to ensure they can be appreciated by generations to come. Projects range from analyzing individual artistic elements, such as pigments, clay or canvas, to elucidate the historical significance of a work, to designing and building display cases and lighting that won’t negatively impact the art.

The Met’s lab, which is one of the biggest in the US, is headed by Marco Leona, a PhD chemist with expertise in crystallography. While pursuing a postdoc at the University of Michigan, “I realized I was not interested in a career in chemistry in a traditional way, and at the same time I was discovering American art museums,” the native Italian says. Visiting the Detroit Museum of Art, as well as others, opened his eyes to the possibility of contributing to the art world from the scientific side. He started cold-calling scientific labs in museums and gathering information about career paths, and pretty soon the Los Angeles County Museum of Art (LACMA) invited him to apply for a position in its research department.

Leona helped improve and consolidate LACMA’s science department and today it is “one of the best labs in the country,” he says. In 2004, he headed east to the Met. The variety of assignments is very appealing. “One day, I’m working on a painting, the next, it’s a bronze statue, perhaps Egyptian or Etruscan,” he says. “The diversity and breadth of the casework is such that we have to adapt and innovate.”

One of his projects involved an analysis of Japanese paintings from 1700 to 1860. He carefully looked at the pigments employed throughout that time and noticed marked differences as Japan became more open to the west. Colors became brighter and almost garish, and images depicted “western activities.” Most importantly, as trade increased between east and west, new technology for making pigments was introduced in Japan that was utilized in later artistic techniques. “We tend to think that art and science and technology are separate, but here’s a case where the technology impacts the art,” he says. “If you can change the pigments, you change the depictions that are shown in the art.”

Technology plays a starring role in the Met’s Lab. “The most common question we get is ‘what’s in this painting (or sculpture or textile) and how did it get there?’” he notes. Leona and his colleagues (who currently include one physics postdoc) use various instruments and technologies, such as mass spectrometry, surface-enhanced Raman spectroscopy, x-ray diffraction and scanning electron microscopy, among many others, to solve their artistic riddles.

Jens Stenger, a PhD chemical physicist who did his postdoc at the Harvard Art Museums, is no stranger to employing intricate technology to examine artwork. As an associate conservation scientist now at Yale University’s recently established Institute for the Preservation of Cultural Heritage, he works on scientific investigations into much of the university’s collections. Common tools for him and his team include those used at the Met’s lab, as well as gas chromatography, x-ray fluorescence spectrometry, UV-visible spectrophotometry and microfading and textile tensile testers. The microfading tester was developed by a scientist at Yale to examine extremely small areas from a work of art to nondestructively ascertain the potential for fading under certain lighting conditions.

At Yale, one set of problems relates to conservation and the use of certain compounds to treat, clean or preserve an object. Stenger and his group work with art conservators to determine what an object is made of and what chemicals can be used on it that will not cause it harm. Another set of problems delves into the historical aspects of an object. The group collaborates with art historians to answer questions about historical occurrences that can be revealed from the art itself (such as whether a painter worked in a certain part of the world) or to answer questions about the art from historical knowledge already known (similar to Leona’s examinations of Japanese paintings). And the final area relates to authentication. “Recently we worked on a painting thought to be an early work of Diego Velázquez,” says Stenger. A materials analysis in the ground layer of the painting strongly suggests that the work was done in Seville, where Velázquez had spent his younger days.

Physicists don’t have to work for a museum or conservation center to contribute to the art world. Charlie Falco, a professor of physics and optical sciences at the University of Arizona (UA), carved a path for himself in academia. “I only have three interests in life: science, art and motorcycles,” he says. As an expert in motorcycles and owner of one of the largest collections of English-language books on motorcycles, Falco was tapped to co-curate an exhibition at the Guggenheim in 1998 on The Art of the Motorcycle. “The museum needed someone to give scholarly credibility to the enterprise,” he recounts, and since the world of art is small and the world of people who appreciate motorcycles as art is even smaller, Falco was invited to oversee the massive project. He hand chose every piece, 100 in total, and helped develop the tale that they told in the exhibit. “We had to have a reason for selecting the motorcycles,” he explains. “They had to tell stories and convey knowledge,” as well as show off their aesthetics.

On his next major project, Falco collaborated with painter David Hockney, who had speculated that the Old Masters had used some sort of optical device to create their detailed paintings. Upon his own examination of some works, Falco immediately noticed the same thing, and the two began working together to prove their hypothesis. Communicating mostly by faxes, “it was the most intense period of scientific collaboration I have experienced in my life,” he says. The result was the now famous Hockney-Falco thesis, which demonstrated that painters from the Renaissance on had used various optical technologies such as a camera obscura, camera lucida, and curved mirrors in crafting their masterpieces.

On the other side of the UA campus, assistant professor Robert Erdmann, a materials scientist and mathematician, currently spends about 90% of his time designing and developing computational algorithms and visualization techniques that reveal the secret life of paintings. “A painting or art object is so complex when viewed from a materials science standpoint,” he says. “It has very diverse materials coming together at different length scales, which makes for a very complex problem.” But with a whole array of imaging techniques currently available, and more being invented, there has never been a better opportunity to dig deeply into a painting’s past.

In one of his most exciting projects, Erdmann was able to prove that three paintings previously thought to have been possibly painted by different artists all came from the same workshop. Using image processing and x-radiography, he demonstrated that the thread spacing patterns of the canvases for all three objects were exactly the same, thus showing that their canvases came from the same bolt of material. Erdmann also used his expertise to invent a visualization technique called a “curtain viewer,” which allows people to view on the internet overlays of paintings taken with different wavelengths of light, such as IR, UV, x-ray and visible, to compare the images all at the same time, across a wide range of magnifications. Another of his innovations gives viewers the chance to see paintings as three dimensional objects by changing the position of a virtual light source.

Whatever the ecosystem in which they operate, all of the scientists concur that their careers in art are exceptionally gratifying. “It’s a huge privilege to spend so much time with the art and be so close to it,” says Stenger. Indeed, “the enhanced access” is a big plus, echoes Leona. “I have the unique opportunity to speak with specialists and learn information about the art that is not part of the general narrative.”

Alaina G. Levine is the author of Networking for Nerds (Wiley, 2014) and President of Quantum Success Solutions, a science career and professional development consulting enterprise. She can be contacted through www.alainalevine.com, or followed on twitter @AlainaGLevine.