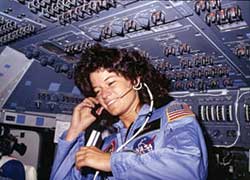 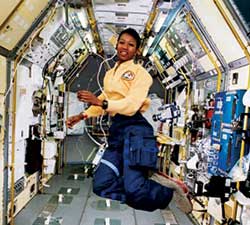 When Russia launched the first man into space in 1961, it heralded the start of a new era in exploration. And it wasn’t just men lining up for the chance to emulate Yuri Gagarin’s historic voyage. Rocket engineer Sergei Korolev, who headed the cosmonaut program, decided the next logical step would be to send a woman to space. He personally selected several promising candidates for the fledgling female cosmonaut program, including Valentina Tereshkova.

Tereshkova was born in a central Russian village called Maslennikovo to recent immigrants from Belarus. Her father drove tractors for a living; her mother was a textile worker. Much of Tereshkova’s education was completed via correspondence courses, and by age 22 she was working in a textile factory like her mother. Tereshkova was also interested in skydiving and made her first parachute jump in 1959 — and that is what caught the attention of the Soviet space program a few years later.

Tereshkova beat out 400 other applicants to become one of five finalists. In addition to meeting the stringent physical requirements, her personal story was compelling. She hailed from working class roots, and her father had died fighting for Russia in World War II, when she was just two years old. Tereshkova survived the grueling training program, and was selected for the space mission Vostok 6.

On the morning of June 16, 1963, Tereshkova officially became the first woman in space, logging an impressive three days in orbit, despite suffering from nausea. It was the last launch in Russia’s Vostok program; the female cosmonaut group was disbanded in 1969, and another 13 years would pass before cosmonaut Svetlana Savitskaya became the second woman in space in 1982. In the interim, Tereshkova became a leading figure in the Russian Communist party, and her reputation as a national heroine persisted even after the collapse of the Soviet Union.

Tereshkova inspired other women to dream about traveling into space — among them a young physicist named Sally Ride. Ride hailed from Los Angeles, where her father was a political science professor at Santa Monica College, and her mother worked at a women’s correctional facility. Ride loved all things science, and was also a star tennis player in high school. But science won out in the end: She earned a PhD in physics from Stanford University, studying the interaction of x-rays with the interstellar medium.

In 1978, she joined 8,000 other aspiring applicants for NASA’s space program, and won admission. She served as the ground-based commander for the second and third flights of the space shuttle program, and eventually won a spot on the seventh mission, aboard Challenger. The fact that she was a woman drew considerable media attention and more than a few impertinent questions. Reporters saw nothing amiss with asking about the possible impact of microgravity on her child-bearing fitness, or whether she sometimes cried on the job. But Ride saw herself only as an astronaut, who just happened to be a woman, and shrugged it off.

On June 18, 1983, she became the first American woman in space (and third overall), and on that mission she successfully used a robot arm to retrieve an errant satellite. A year later, she was back in space aboard Challenger for her second and final mission. When the shuttle exploded mid-flight in 1986, Ride was chosen to serve on the presidentially appointed Rogers Commission investigating the accident.

Ride left NASA in 1987, and joined the faculty of the University of California, San Diego, in 1989. But she continued to work with NASA on public outreach, and served on the 2003 commission to investigate the crash of the Columbia space shuttle. She also authored several children’s books with Tam O’Shaughnessy, a psychology professor at San Diego State University, who later was revealed to have been Ride’s partner after Ride passed away in 2012 from pancreatic cancer. (Ride had previously been married to a fellow astronaut, Steve Hawley; they divorced in 1987.)

Like Tereshkova before her, Ride inspired young women to follow her into space — most notably Mae Jemison, who became the first African-American woman in space when Endeavour launched on September 12, 1992. Growing up in Chicago, Jemison thought traveling to space would be commonplace by the time she grew up. She admired the actress Nichelle Nichols, best known for her portrayal of Lieutenant Uhuru on Star Trek. Jemison loved science, as well as dance and the arts, and entered Stanford at age 16, eventually earning a medical degree from Cornell Medical College. She then spent several years with the Peace Corps, serving in Liberia and Sierra Leone.

After Ride’s history-making flight in 1983, Jemison decided to apply for NASA’s astronaut training program. She admitted she thought it would easier than “waiting around in a cornfield waiting for ET to pick me up....” She wasn’t accepted, but she applied again in 1987 and this time she got in. It was never about being the first African-American woman in space, Jemison always insisted: “I wouldn’t have cared less if 2000 people had gone up before me…. I would still have had my hand up, ‘I want to do this.’”

Jemison flew only one space mission, aboard Endeavour, and brought a photo of famed African-American aviatrix Bessie Colman with her. The first thing she saw from space was her hometown of Chicago. “It was such a significant moment, because since I was a little girl, I had always assumed I would go into space,” she later recalled.

Jemison left NASA in 1993, held faculty positions at Cornell University and Dartmouth College, and founded BioSentient Corporation in 1999 to commercialize a biofeedback device based on techniques developed at NASA. In 1993, she realized another dream, appearing on an episode of Star Trek: The Next Generation (the first real-life astronaut to appear on the series).

Many women astronauts, from all over the world, have since followed in the footsteps of Tereshkova, Ride, and Jemison — 57 in all, out of 534 people who have traveled into space. Others will surely follow.