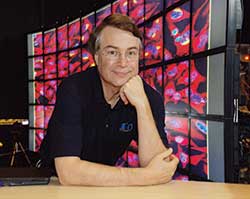 Photo courtesy of California Institute for Telecommunications and Information Technology

Earlier this year, an unusual honor underscored the direct link between basic research into black holes and the explosion of the Internet. APS Fellow Larry Smarr of the University of California, San Diego, received a 2014 Golden Goose Award for proposing and directing the country’s first academic supercomputer center.

A group of science organizations and members of Congress established the Golden Goose award in 2012 to recognize the contributions of unorthodox-sounding federal research that made a significant social or economic impact. APS is one of the award’s sponsors.

The Golden Geese are a counterpoint to the Golden Fleece Awards created in the 1970s by the late congressman William Proxmire (D-WI) to mock government waste, especially research that he deemed silly. Instead, the Golden Goose Award is designed to highlight the need for funding research that may not sound immediately practical, but has unexpected benefits.

While studying the physics of black holes at the University of Illinois at Urbana Champaign, Smarr won an NSF grant to establish the National Center for Supercomputing Applications. Two researchers at the center, Marc Andreessen and Eric Bina, created Mosaic, the first widely used graphic web browser, which helped power much of the early 1990s Internet boom. “It’s a story that needs to be told more because people just assume corporations invented the web,” Smarr said.

Representatives Randy Hultgren (R-IL) and Jim Cooper (D-TN) announced the winner of the award at the January 2014 meeting of the American Association for the Advancement of Science in Chicago.

“Science that is ‘strange’ to Congress can lead to the next scientific breakthrough, and these scientific inquiries are vital for America to maintain its place as an innovative and exceptional nation,” said Hultgren.