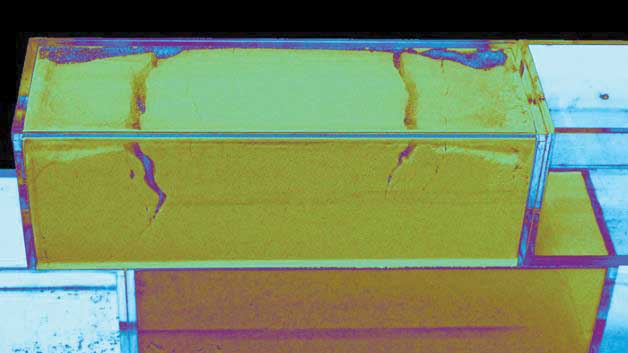 When tectonic plates shift — grinding against each other and creating earthquakes — they are usually lubricated by a layer of pulverized rock. In her lab at North Carolina State University, Karen Daniels studies small plastic disks that slide against each other, similar to Earth’s tectonic plates. Daniels and her colleagues are investigating whether or not the plastic disks, and possibly the grains in between the plates, produce acoustic signals as they move.

Now her work has taken a new twist. Last year, Troy Shinbrot, a physicist at Rutgers, approached Daniels and asked her if she wouldn’t mind measuring the voltage near the plastic disks during her experiments.

Of course, two different materials rubbing up against each other can generate a charge via frictional forces, also known as the triboelectric effect; an example of this is the static electricity that builds up in a wool sweater as it rubs against a cotton t-shirt.

But Daniels is looking at grains of the same material, and there is no clear reason why a voltage would build up when the plastic disks rub against each other.

“If you’d asked me [a year ago] if my experiment was producing voltages, I would have said ‘no, probably not,’” said Daniels.

When she measured the voltage as the disks slide against each other, she found a positive voltage that increased with the distance the disks moved.

The experiment is not an anomaly. Before contacting Daniels, Shinbrot experimented with tubs of flour, acetaminophen powder, plaster, and other granular materials that have some cohesiveness. A horizontal jerk of the container opens a trench in the material, and this creates a negative voltage. Another jerk closes the trench, creating a positive voltage.

“Our first suspicion was, this has got to be a mistake. There’s something stupid we’re doing; the container is charging, there’s some other thing we’re not taking account of,” said Shinbrot at a press conference at the APS March Meeting in Denver. “So we’ve tried many, many tests to remove these spurious effects, and so far we have failed.” The team measured a maximum of 400 volts, but found that the currents in the materials were near zero.

Heinrich Jaeger at the University of Chicago studies charged grains falling through a vacuum–a line of inquiry that could help explain why airborne granular materials can sometimes become explosive. Jaeger has been paying attention to work done by Shinbrot as well as research by Daniel Lacks at Case Western University, on the subject of same-grain charging. While there is a significant body of literature on falling grains and the triboelectric effect, he says very little is known about the same-grain charging that Shinbrot is exploring.

“Even if we ignore the underlying mechanism for a moment, there is still controversy about the most basic issue, such as what kind of charge carriers are producing the charging,” said Jaeger in an email. “There are reports that these carriers might be electrons or holes or ions or even bits of charged material, and probably this will depend on the detailed circumstances.”

Shinbrot began his investigation as a way to potentially explain the puzzling phenomenon often called “earthquake lights.” Appearing in forms that vary from floating orbs of fire to lightening-like bolts, these have been observed before, during, and (in a few rare cases) after earthquakes. They have also been observed near avalanches, as well as independent of either event. Humans have studied the possible connection between lightning and earthquakes for at least 300 years, and Shinbrot warned at the Denver meeting that an Internet search for information on this subject will also yield a high number of speculative theories about UFO’s.

But Shinbrot is not the only one trying to separate the speculation from the science.

A research collaboration led by scientists from Quebec’s Ministry of Natural Resources compared basic information about 65 observed instances of earthquake lights, and published the results in the January/February 2014 issue of Seismological Research Letters. The authors implicated stress-induced currents as the cause of the earthquake lights, but Shinbrot says the experimental results he’s seen indicate that the charging “seems to be associated with individual grains and not bulk properties.” That would rule out piezoelectricity, which arises in a material due to mechanical stress.

To connect earthquake lights with grain charging will obviously require an understanding of how the charging phenomenon scales up. Shinbrot says he and his colleagues are “building larger versions of some of these devices to try to answer that question.”

“We’re really just wandering around in the dark observing these things,” said Shinbrot during his session talk in Denver. “We want to know what’s going on. We really don’t know.”