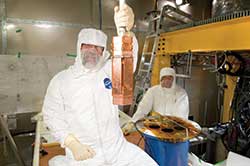 Researchers are starting to expand the search for dark matter candidates.

After years of null results in the search for dark matter, physicists have started pursuing more exotic and expansive theories about what makes up most of the mass of the universe. For many physicists, the idea of a solitary dark matter particle seems outmoded, and they have ramped up their intellectual and experimental searches accordingly.

“It may be a little naïve to believe that the dark sector is only one particle,” said Blas Cabrera of Stanford University, one of the researchers in the large Cold Dark Matter Search (CDMS) collaboration. “We’re covering all the bases rather than focusing on the one that seemed attractive a decade ago.”

Searches continue for theoretical particles like axions, which have been dark matter candidates for some time. But scientists are also talking more and more about the possibility of a whole “dark sector.” This is the concept that dark matter isn’t necessarily composed of a single particle, but rather is made up of a menagerie of invisible particles and forces.

“Instead of thinking of it as a theory, I would think of it as a class of theories,” said Dan Hooper of Fermilab. “This would be a dark matter sector…not just a particle, but a series of particles that interact....”

At the 2014 APS April Meeting, talk of the dark sector took center stage at the Fred Kavli Keynote Plenary Session, where Rafael Lang of Purdue University highlighted the search. (Watch on YouTube)

“We have to be much more open-minded,” Lang said in an interview. “We haven’t found the easiest solution, so we have to look for the next best thing.”

The size of this theorized dark sector could potentially be huge. Physicists have proposed models that include multiple new particles and forces.

“Around 2008, people started thinking about models where the dark matter sector was much more complicated,” said Kathryn Zurek from the University of Michigan. “The idea was that there was this hidden world that was separated from us.”

In part, this arose from anomalous signals in 2008 from the orbiting Payload for Antimatter Matter Exploration and Light-nuclei Astrophysics (PAMELA) experiment, which picked up a large unexpected excess of positrons. Though not definitive, this excess fits with some models of self-annihilating dark matter that required another carrier particle. At around the same time, other unexpected signals in the unrelated DAMA experiment in Italy also piqued the interest of physicists.

“All these anomalies that were building up sort of focused people’s attention,” Zurek said. Over the next several years, experiments looking for heavy Weakly Interacting Massive Particles (WIMPs), long thought to be the top candidate for dark matter, kept turning up nothing.

“As direct detection and Large Hadron Collider (LHC) experiments have ruled out our favorite ideas over the last decades, people are thinking of other things,” Hooper said. He added also that there was a new generation of physicists coming to prominence that was more willing to explore new ideas. “It doesn’t only reflect the changes in the experimental physics data, but it also reflects the new blood.”

Another possibility is that depending on how these theorized particles behave, different detector materials might be less sensitive to certain kinds of WIMPs. It’s a theory that could explain the apparent signals in DAMA and the Coherent Germanium Neutrino Technology (COGENT) experiment, and the lack of a signal in other similar experiments.

“CDMS’s germanium detector [data] are very much in conflict with those of COGENT,” Cabrera said. “We really need to increase our search to include multiple target materials.”

The search continues in parallel for evidence of another theorized particle, the axion. Originally predicted by nuclear physicists to solve a problem in quantum chromodynamics, axions have a tiny fraction of the mass of an electron, making them nearly impossible to detect. Over the next three years, the University of Washington’s Axion Dark Matter eXperiment will listen for the weak signals of axions converting into microwaves. However, if at the end of the run their experiment turns up nothing, the collaboration would be facing an impasse.

“There’s a natural stopping point on the experimental side,” Cabrera said. The detectors are becoming so sensitive that if axions are light enough, the neutrino barrage from the sun could drown them out. “The next generation [of detectors] will in fact see solar neutrinos as a signal.”

Even if the search discovers axions, it might not close the book on the dark matter mystery. “We would really like something like the axion to exist, but it doesn’t have to be all of the dark matter,” Cabrera said.