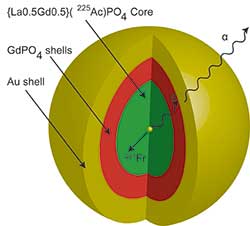 Researchers are starting to expand the search for dark matter candidates.

In May 2013, the Food and Drug Administration (FDA) approved the first cancer treatment drug containing an alpha-emitting isotope. At the 2014 APS April Meeting, J. David Robertson, professor of chemistry at the University of Missouri, discussed a new technique that involves embedding alpha emitters inside a layered, gold-coated nanoparticle to make them safe for treatment for even more types of cancer.

Endoradiotherapy is a form of internal radiation therapy in which a radioactive substance is ingested by or injected into the patient. Until last year, the radioactive isotopes used in endoradiotherapy were beta emitters (those that release electrons or positrons). While surgery is usually the best option for sizeable, isolated tumors, chemotherapy is utilized to destroy small groups of cancer cells (or “micrometastases”) in multiple locations.

Endoradiotherapy drugs offer a targeted alternative to chemotherapy for attacking micrometastases. The drugs can be engineered to bind to receptors that are found on the cancer cells. When released nearby, beta particles do significant damage to cell DNA by ionizing other atoms and creating reactive chemical species in the cells.

Alpha particles are more direct, delivering energy directly to the cell DNA and fatally disrupting chemical reactions. And while beta particles deliver a few hundred keV of energy over a few millimeters, alpha particles deliver a bigger punch of 5 MeV, but stop after a distance of a few microns. “That very large amount of energy deposited in short range…makes them more cytotoxic to the cell than beta emitters,” said Robertson. “And it will allow you to get the same therapeutic effect with [about an order of magnitude] less radioactivity.”

In May, the FDA approved Xofigo, previously known as Alpharadin, which contains the alpha emitter radium 223 chloride. Xofigo is currently being used to treat bone metastasis associated with prostate cancer. Robertson reports that a clinical trial of Alpharadin was so successful compared to placebo that the trial was stopped, so the control group could receive the drug as well.

Robertson and his collaborators from Oak Ridge National Laboratory and the University of Tennessee are in the preclinical phase of research to adapt the alpha emitter actinium 225 for endoradiotherapy. The isotope has a half-life of 11 days, which is ideal, since it gives the researchers plenty of time to synthesize the drug (about 2 days) and then let it pass through the body and accumulate at the target site (another 2 to 3 days).

But decaying particles come with certain challenges: In the case of 225Ac, the alpha particle breaks free of the actinium nucleus with an energy of 5 to 6 MeV. This gives the daughters of the actinium a kick of about 100 keV, which is more than enough to tear through a molecular chain or a layer of cells, and send the daughters traveling through the body. The isotope 225Ac eventually decays to bismuth, which has a 46-minute half-life and can be toxic if it builds up in the kidneys.

Robertson and his colleagues think they have found a solution: wrap the actinium in a layered nanoparticle to absorb the recoil energy and contain the daughter isotopes. The final product includes inner layers of lanthanide phosphate and gadolinium phosphate, and an outer layer of gold. The alpha particles still manage to escape the nanoparticle with only 0.1% energy loss, but after 24 hours 90% of the bismuth is contained in the nanoparticle or in nearby cells. Robertson says previous efforts to contain the bismuth byproduct of 225Ac decay have succeeded in containing only 10 to 20 percent.

“We’re close to the goal of 100% [retention of bismuth],” said Robertson. The gold nanoparticle is currently being tested in the first phase of preclinical trials. Now Robertson and colleagues will have to see if the retention of bismuth is good enough to justify using the drug in humans. It comes down to the same question that doctors must ask of so many cancer drugs — “Does the benefit outweigh the risk?”