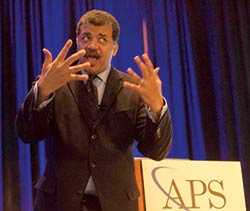 Physicists and popular culture need to come together.

APS April Meeting, Savannah — Science has become part of the pop-culture lexicon, and it’s here to stay. That was the thesis of Neil deGrasse Tyson’s plenary talk at the APS April Meeting. But he also drove home that this cultural shift doesn’t let physicists off the hook. To communicate with the general public, scientists need to meet them half way, which means knowing a few things about “life outside the lab.”

One of the most popular pages on Facebook is titled “I F***ing Love Science”; the number one sitcom in America is The Big Bang Theory, about a group of physicists; Comic-Con, once a small meeting of comic book artists and fans is now one of the top events for the movie and television industry, and regularly features events centered on science. Tyson showed a gallery of images featuring science jokes and said, “If science is embraced by artists, that’s the best evidence that it’s become mainstream.”

Perhaps the most prominent evidence that the general public wants science as part of the entertainment landscape is a project of Tyson’s own: He is the host of a reboot of Carl Sagan’s popular science series Cosmos, airing on FOX (a prime-time network rather than a dedicated science channel).

Tyson was already earning comparisons to Sagan, even before he took Sagan’s old job. Through his very active Twitter account, a handful of popular books, various television appearances (on both news and entertainment), and an ongoing list of other outreach efforts, Tyson has worked hard to make himself a public face for science. His invigorating personality and down-to-earth explanations helped launch him into the rare realm of celebrity scientist.

At one point Tyson asked how many audience members did not own a television, or if they did, how many watched it infrequently. When many people raised their hands, Tyson replied, “Then most of you have no idea who I am.”

Tyson’s talk focused on convincing the audience that science had made its way into popular culture, and that being engaged with the public allowed him to participate in discussions about topics other than science. He also emphasized that scientists should learn about pop culture if they want to communicate with the public or even with their students.

Tyson showed his audience the top ten Twitter accounts in the world, each with an excess of 30 million followers. The list includes seven pop singers and President Obama. Tyson told his audience, “If you ever need to communicate with anyone who isn’t a physicist, go learn who these people are. Because everybody else knows who they are. Otherwise don’t go home crying that nobody understands you. You testify to Congress and you say they don’t get it there’s something wrong with them. Noooooo. There’s something missing in your lexicon because everybody else is fluent here. And if you want them to fund what you’re doing, learn something about what people are doing outside of the laboratory.”

Abstract: Tales from the Twitterverse