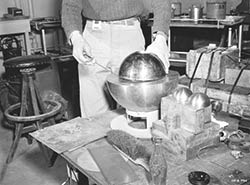 Recreation of the Slotin incident of “tickling the dragon’s tail” which shows the configuration of beryllium reflector shells prior to the criticality.

One of the most riveting scenes in the 1989 film Fat Man and Little Boy isn’t its masterful depiction of the Trinity Test. It’s a scene in which a fictional physicist named Michael Merriman botches a criticality experiment, receiving a fatal dose of radiation. Merriman is a composite character, based on two real physicists, whose deaths made them a different kind of casualty of war.

The criticality research at Los Alamos National Laboratory was highly dangerous due to the radioactive substances involved. Robert R. Wilson recalled his own brush with death while assisting a physicist in the Critical Assemblies Group to determine when criticality was reached as one stacked a series of enriched uranium hydride cubes. The group didn’t rely on the usual elaborate safety devices commonly used at cyclotron facilities at the time. Instead, they used a simple set-up involving a wooden table, a single neutron counter to monitor criticality, and several cubes of enriched uranium hydride.

Wilson watched as the physicist started stacking uranium cubes, and then noticed with alarm that the neutron counter wasn’t working because the voltage supply was burnt out. When the counter was turned back on, it lit up immediately. “A few more cubes and the stack would have exceeded criticality and could well have become lethal,” Wilson recalled.

Furious, Wilson raged about it to Oppenheimer himself, but he had to leave for Trinity the very next day, so he let the incident drop. Had he stayed and pursued the matter, Wilson believed, “I might have saved the lives of two people. To this day, the incident is on my conscience.” Those two people were Harry K. Daghlian, Jr. and Louis Slotin, both of whom died of acute radiation poisoning after accidents that occurred while conducting criticality experiments with the same plutonium core, dubbed the “demon core.”

Daghlian was an Armenian-American physicist who joined the Critical Assembly Group while still a graduate student in 1944. On August 21, 1945, he was building a neutron reflector, carefully surrounding a core of plutonium with tungsten carbide bricks, the better to serve as a radiation shield. He accidentally dropped a brick into the center, triggering a critical reaction. Daghlian heroically dismantled the pile manually to halt the reaction, but at great personal cost. The dose of radiation he received as a result was so high, he died within 25 days of the accident.

The physical deterioration was horrifying, and Daghlian allowed it all to be documented for posterity. His right hand blistered, the nails turned blue, and the skin reddened as both hands and abdomen began to swell. The redness spread and his skin sloughed off in layers, and he was plagued by abdominal cramps and diarrhea. He was emaciated by the time he mercifully slipped into a coma, having lost most of the skin of his abdomen and lower chest. His death certificate listed the cause of death as “severe burns, upper extremities and trunk.”

The Canadian-born Slotin notably assembled the core for Trinity, and was also an expert in conducting a delicate experiment nicknamed “tickling the dragon’s tail.” It involved placing two half-spheres of beryllium around the core and moving them closer and further away while monitoring the rate at which neutrons multiplied in the core, bringing the pile to the very edge of going critical. If the two beryllium spheres closed, even for a moment, the mass would go critical and release a burst of ionizing radiation.

Slotin was a bit of a daredevil, a former amateur boxer who favored jeans and cowboy boots, and told tales of his days as an anti-aircraft gunner during the Spanish Civil War–although his brother later said that Slotin had actually just been on a walking tour through Spain, and played no part in the war. He brought a bit of that mentality to his research, despite the fact that he had witnessed Daghlian’s demise. Whenever he performed the experiment, he preferred to remove the shims used to keep the spheres apart and separate them by using just the blade of a simple screwdriver. A dismayed Enrico Fermi told Slotin he would be “dead within a year” if he continued to flout the safety protocols.

Sadly, Fermi was right. On May 21, 1946, as six others looked on, the screwdriver Slotin used to keep the spheres apart slipped, and they came together; the core went supercritical with flash of blue light and massive wave of neutron radiation. Slotin used his body to shield his colleagues from the blast as much as possible while quickly knocking the two spheres apart to stop the chain reaction. None of the assembled men were wearing their dosimetry badges, so accounts of just how much radiation they may have received vary. But for Slotin, it was lethal.

Slotin reported an immediate sour taste in his mouth and a burning sensation in his left hand (used to knock apart the spheres). He vomited as he was rushed to the hospital, and his condition quickly worsened, as he suffered severe diarrhea, swollen hands, massive blistering, and gangrene.

Nine days after the accident, Slotin died after “a total disintegration of bodily functions.” Ironically, he had become disillusioned with the postwar atomic tests, and one reason for that ill-fated experiment was to train a replacement, so Slotin could resume his prewar research in biophysics and radiobiology at the University of Chicago. He never got that chance.

In response to his death, Los Alamos ceased all hands-on experiments with critical assemblies, using remote controlled machines to protect the operators. As for the killer “demon core,” it was used in one of the first postwar atomic bomb tests at Bikini Atoll, a mere five weeks after Slotin’s death. The test went off without a hitch.