Thoughts about Russian Science, with Love and Bitterness 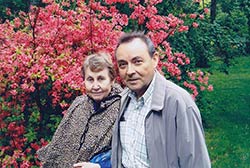 At the end of August 1992, I came with my family to East Lansing, Michigan, to take a job as a visiting professor at Michigan State University (MSU). I did not expect at that time that this would be lifelong work, but MSU became a new home and I am still here. Before that I was working for many years at one of the best (I believe it’s the best, but I am not unbiased) scientific institutions of the former Soviet Union, the Budker Institute of Nuclear Physics (BINP) in Novosibirsk. In Siberia, I left a big part of my life: the famous Institute and close friends. My feelings of love and nostalgia are mixed with painful bitterness concerning what is happening with fundamental science in Russia.

Twenty years ago, my colleague from the BINP, Valentin Sokolov and I published in the German journal Physikalische Blätter, [vol. 50, issue 6, p. 577 (1994)] an article with the title (in English translation) “Russia: Will the Science Survive?”. In the very first sentence we acknowledged that “Russian fundamental science is now painfully dying.” Now, in 2014, as one Russian journalist said “The patient is still alive although the conditions are not favorable for his existence.”

The situation has now become really critical due to the recent so-called reform of the Russian Academy of Sciences (RAS) and the general political situation in the country. Unfortunately, during the past two decades the leadership of the RAS did not make any serious and absolutely necessary changes. As we wrote in 1994, the RAS itself, contrary to its official status as a public society with membership by elections, grew into a huge unwieldy organization with an extremely inflated bureaucratic staff; the overwhelming majority of “non-member’’ scientists had no way to influence any decisions of the Academy leadership; a deep gap of distrust and even confrontation opened widely between “rank-and-file” scientists and scientific generals.

The fundamental sciences have always had their natural home in the RAS, but for many years they have had a very low level of financial support. Even worse is the situation in the research universities (which is quite a small fraction of all universities). Less than 20 percent of all university professors perform any scientific work. The whole budget (RAS + universities) for fundamental science is approximately the same as the Harvard budget. The salaries of scientists, apart from members of the Academy, are typically quite low, especially in the beginning of their careers. This pushes gifted young people out of science. The funds available for international collaboration and for journal subscriptions are extremely limited.

The complete absence of a consistent program for restructuring the Academy and for the general development of science in the country could continue for a long time. Last year this sleeping kingdom was awakened by unexpected reform from above. This reform, which was undertaken without any preliminary discussion with scientists, made the situation even worse. Now, scientific institutions have been removed from the RAS and have been transferred to a new bureaucratic organization called the Federal Agency of Scientific Organizations (FASO). Nobody knows how this organization, being led by non-scientist functionaries, will regulate and direct scientific policy. It is supposed to have a director of a scientific institution acting as a local tsar and personally appointing the scientific council of the institution, which earlier was elected by the scientists. The budgets are expected to be cut and in some places people have stopped working and anticipate a big staff reduction. This has already happened to the RAS Institutes in the humanities (several staff members were simply expelled from their premises, which were then occupied by the officials of FASO). One nonsensical part of the reform is the incorporation of the Academy of Medical Sciences and the Academy of the Agricultural Sciences into the RAS; those organizations have a different style and lower scientific prestige.

Unfortunately, the whole style of this reform and some of its specific features bring to mind another possible purpose: the militarization of science. Highly positioned officials have repeatedly required that science be redirected to immediate applications, especially for military purposes. Repression against scientists openly expressing a different opinion took place before the reform and this is seemingly intensifying now. This was clear first of all in non-academic institutions, especially those belonging to the so-called Kurchatov Center, lead by Mikhail Kovalchuk.

Last year the APS Committee on International Freedom of Scientists sent a letter, signed by the 2013 APS President Michael Turner, to the President of Russia expressing concern about the RAS reorganization. He also sent a letter to Kovalchuk on behalf of outstanding physicists Leonid Ponomarev (Kurchatov Institute proper) and Mikhail Danilov (Institute of Theoretical and Experimental Physics, ITEP) who were persecuted for their independent behavior. There was no answer to those letters; Ponomarev was forced to resign. The famous ITEP is in terrible shape, with a destroyed scientific infrastructure and a return to Soviet-style everyday life. Currently the same misfortune is threatening the best world-known institutions in physics, such as the BINP and the Petersburg Institute of Nuclear Physics.

Now the situation is rapidly deteriorating after the annexation of Crimea. The frenzied propaganda on TV and radio plus Orwellian special “hatred lessons’’ in the schools all over the country are accompanied by an obedient administration in some scientific centers and institutions of higher learning. Just last week a prominent historian Andrei Zubov was fired from the Moscow Institute of International Relations with the explanation that he was punished for disagreement with the government policy. There is information that the same wave of persecution is going on in peripheral institutions. We should also remember that there are scientists imprisoned for many years after falsified accusations from special services. In spite of the fact that the Russian Constitution clearly forbids establishment of a state ideology, this is what happens in reality. This ideology, with a lot of similarity to what was going on in Germany 75 years ago, including what happened at the Olympic games and the “Anschluss” of Sudeten and Austria, was called by independent journalists “Russism.”

Russian scientists are now making attempts to organize their grass-roots activity to try to withstand those grave trends (it could be too late...). The most active part in this effort is played by physicists. We have to seriously think about all of the ways we can help them and support Russian science while it is still alive.