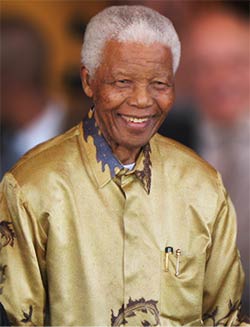 “Education is the most powerful weapon...to change the world.”

Nelson Mandela (July 18, 1918 – December 5, 2013) overthrew apartheid in South Africa and liberated non-whites from racial oppression and the constant threat of government-sanctioned violence. The methods and strategies adopted by Mandela in eliminating apartheid are similar to those employed by physicists when addressing complex and challenging problems. In particular he understood the importance of forming national/international collaborations and partnerships, as well as securing adequate funding. Unfortunately, Mandela’s problems were made even more complex and difficult because of time-dependent varying perturbing sociopolitical forces.

Through extensive reading, and subsequent application of the knowledge obtained, Mandela discovered that determination and nontraditional thinking were essential to success. The leadership of the African National Congress (ANC), along with Mandela himself, included high-caliber intellectuals. They were educated mainly at English-speaking universities, particularly Fort Hare and later at the University of the Witwatersrand (Wits). In this environment, the ANC leadership creatively utilized dynamic problem-solving and nonviolent response strategies. This creativity was essential to minimize the potential for the slaughter of innocent lives in the struggle against apartheid.

The Treason Trial
In 1948 the Nationalist Party won the election in South Africa for the first time, essentially on the basis of apartheid, and immediately embarked upon the apartheid policy. For instance, the Group Areas Act of 1950 prevented black and colored South Africans from owning land in urban areas. This resulted in the massive forced removal of blacks, Indians and coloreds from cities to new townships at the outskirts of cities, such as Soweto for blacks. In 1955, a massive ANC conference near Soweto adopted the “Freedom Charter.”  Inter alia, it affirmed that South Africa belongs to all its inhabitants, black, colored, Asian and white, and demanded a non-racial, democratic system of government, as well as equal protection for all people before the law.

As a result of this and other actions, 156 individuals, including ten women (105 Africans [blacks], 23 whites, 21 Indians and 7 coloreds) were arrested and charged with high treason in 1956. The actual number that stood trial was 30, which included Mandela, Walter Sisulu, Oliver Tambo, and such lesser-known but important persons as Joe Slovo, Ahmed Kathrada, Helen Joseph, Lillian Ngoyi, and Duma Nokwe. Albert Luthuli viewed the treason trial positively; it demonstrated that the resistance was not a matter of race [1]. Importantly, the Treason Trial Defense Fund allowed the defendants to engage eminent lawyers.

It was during the treason trial that Mandela’s skills as a brilliant barrister and visionary leader became manifest; he emerged as the ANC’s most valued figure and leader. After the Sharpeville massacre (March 21, 1960), the Government declared a State of Emergency and banned the ANC. Without the legal team, Mandela and Nokwe then adopted a strategy that physicists could characterize as entanglement. This was a legal maneuver designed to slow down the trial process considerably, thereby allowing the State of Emergency to expire.

When the trial resumed, the government alleged that the accused intended to replace the existing government with a Soviet-style state. The Crown relied on the expertise of Andrew Murray, Professor of Philosophy at the University of Cape Town. He labeled many of the documents seized from the accused, including the Freedom Charter itself, as communistic. Finally, the defense read a passage that the professor unhesitatingly described as “communism straight from the shoulder” [2]. This turned out to be Murray’s own article, written in the 1930s. The three judges found the accused not guilty and acquitted them. Mandela commended the judges for “being decent men.” Many of us in South Africa followed the trial religiously and were strongly motivated to continue our education, particularly following the government’s defeat with its own laws, to enhance our intellectual capacity (AZM attended Fort Hare, 1960-1965).

Operating underground
Immediately after the treason trial Mandela went underground without even going home; the writing was already on the wall about the authorities’ intentions. He then began organizing and operating against apartheid like the Scarlet Pimpernel, that elusive character of the French Revolution. Mandela’s statement [2]: “Guide the violence that was inevitable,” convinced the executive of the ANC, particularly Chief Luthuli, who was morally committed to non-violence. It was important to Mandela to guide it to save as many lives as possible.

In May, 1961 Mandela made the bold public statement [2]: “If the Government’s reaction is to crush by naked force our nonviolent struggle, we will have to reconsider our tactics.” Notwithstanding the ANC executive committee’s criticism of him, Mandela, demonstrating his superb leadership qualities, responded [2]: “But sometimes one must go public with an idea to push a reluctant organization in the direction you want it to go.”

In the 1960s, Mandela, underground and wanted, was tasked with organizing “Umkhonto weSizwe” (The Spear of the Nation), the military wing of the ANC, but the ANC itself still remained committed to the elimination of apartheid through nonviolence. He travelled through Africa to England, studying and advocating for his case. After seventeen months on the run, he was arrested and charged with treason. At the Rivonia Trial, he concluded his defense famously with: “I have fought against white domination and I have fought against black domination. I have cherished the ideal of a democratic and free society in which all persons live together in harmony and with equal opportunities. It is an ideal which I hope to live for and to achieve. But if needs be, it is an ideal for which I am prepared to die.” The presiding judge spared him the death sentence, but gave him life imprisonment.

Mandela’s Impact on Science and Technology in Africa
In 1990, Mandela came out of Robben Island after twenty-seven years of incarceration and shared the Nobel Peace Prize in 1993 with former president Frederik de Klerk. In 1994, he made history when he became the first black president of South Africa. Part of what made Mandela an outstanding leader is that he had no vengeance in his veins. Of leadership, Mandela wrote “Lead from the back — and let others believe they are in front.”

The elimination of apartheid positioned Mandela to unleash a force that accelerated science and technology on a trajectory that changed forever his country and others in Africa.  He made political moves that were based upon the same critical thinking skills that make an excellent physicist. He analyzed how leaders in other countries addressed problems, and carefully determined the path forward. The “political physicist,” Mandela, was not perfect. Many believe that he did not act swiftly and decisively enough to curtail HIV/AIDS. Notwithstanding that, soon after leaving office, Mandela founded the Nelson Mandela Foundation, whose major thrust being to educate the public about HIV/AIDS, prevent new infections, and provide for the treatment of AIDS.

One of the greatest achievements realized by the momentum for science and technology generated by Mandela was the selection of South Africa and Australia as the two major sites for the international Square Kilometre Array (SKA). It will be the world’s largest radio telescope and one of the biggest scientific projects ever to be carried out. His administration recognized that Southern Africa had the geography and environmental indicators necessary for leadership in astronomy. His Minister of Arts, Culture and Technology, Baldwin Ngubane, successfully promoted the multinational SKA project for Southern Africa. Philemon Mjwara, the current Director General of South Africa’s Department of Science and Technology and one of the creators of the African Laser Center (ALC), ensured South Africa’s successful bid for the SKA.

With the support of MIT, one of us (SKM) helped to establish the ALC, a virtual center, comprising over thirty laboratories throughout Africa that seeks to enhance laser science and engineering in both research and training, thus contributing to Mandela’s vision for science to be the driver of innovation for the whole of Africa. Closely connected to the ALC is the US-Africa Advanced Studies Institute, created by one of us (AZM), which brings graduate students, postdocs and senior researchers to Africa periodically to learn about the latest developments in optics, photonics and atomic physics.

Mandela’s vision promoted South Africa’s participation in the Higgs boson discovery at CERN’s Large Hadron Collider; establishment of the National Institute for Theoretical Physics, headquartered at Stellenbosch University, with regional nodes at Wits and the University of KwaZulu-Natal; creation in 2007 of the African University of Science and Technology in Abuja, Nigeria, the first of a series of Nelson Mandela Institutions; Namibia’s bid to host the southern hemisphere portion of the international Cherenkov Telescope Array, which will be the world’s largest gamma ray telescope; and the development of South Africa’s rapidly growing synchrotron light source user community. For the last item, the government recently approved the community’s Strategic Plan, and also (1) approved the development of a more detailed business plan and (2) signed a formal medium-term arrangement with the European Synchrotron Radiation Facility.

In 2007, Francis Allotey of Ghana convened the final international planning meeting for the new African Physical Society (AfPS) during the 2nd US-Africa Advanced Studies Institute held at iThemba LABS in Cape Town. Subsequently, in 2010, the Laser Atomic, Molecular and Optical Sciences (LAM) Network’s President Ahmadou Wagué of Senegal organized a joint meeting of the LAM Network, ALC, Edward Bouchet Abdus Salam Institute (EBASI), which fosters African and African-American partnerships, and the (US) National Society of Black Physicists (NSBP). That meeting launched the AfPS with Allotey as its first President. At the recent LAM 10 Conference in Senegal, 2014, Wagué attributed to Mandela the establishment of the LAM Network.

Indeed, Mandela’s triumph over apartheid and vision for science and technology are embodied in his statement: “Education is the most powerful weapon which you can use to change the world.”

Alfred Msezane, professor of physics at Clark Atlanta University, is a Fellow of the Institute of Physics, National Society of Black Physicists (US), American Association for the Advancement of Science, and APS. Educated in South Africa, Canada and the US, he has co-authored over 300 peer-reviewed research papers.

Sekazi Mtingwa is Principal Partner at Triangle Science, Education & Economic Development, LLC and President of INCREASE, an organization whose goal is to increase the utilization of facilities at US national laboratories by faculty and students from African-, Latino- and Native-American-serving colleges and universities.