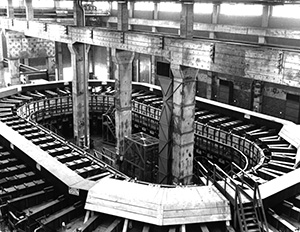 Photo courtesy of the US Department of Energy

Calutron used in the mid-1940s for uranium enrichment at the Oak Ridge Y-12 plant, one of the sites marked for preservation by the Atomic Heritage Foundation.

An arduous effort to preserve the history of the Manhattan Project in the form of a National Park (at several different locations) may be close to fruition, said the head organizer at a recent session of the APS March Meeting in Denver.

Cynthia Kelly, founder of the Atomic Heritage Foundation, remarked that legislation this year might clear the way for the National Park Service (NPS) to take over the birthplace of the atomic bomb.

“These buildings embody this history in a way that nothing else does,” Kelly said. “The Park Service will do what they do best. They’re America’s storytellers.”

The Obama administration must formally transfer control of the land from the Department of Energy (DOE) to NPS before the park can move forward. A bill authorizing the transfer got through the House in 2013, but was dropped in the Senate. It would have transferred sites in Hanford Washington, Los Alamos, New Mexico and Oak Ridge, Tennessee to NPS.

“It’s been almost five years since any park legislation has passed,” Kelly said. “It’s been very difficult in this congress to get the votes we need.”

Facilities picked include the “V-site,” a cluster of buildings at Los Alamos where physicists assembled the first atomic bomb, the B-reactor and its control room at Hanford, which produced the first plutonium, and one of the calutrons at Oak Ridge for separating uranium.

But in a setback, the giant mile-long K-25 plant which produced most of the uranium used in the “Little Boy” bomb was demolished in December. “I tried very hard to get one sliver saved,” Kelly said.

Downtown Los Alamos (“outside of the fence” to the locals), is also home to other historic parts of the Foundation’s grand plan.

“You can go to Oppenheimer’s house,” Kelly said. “We were able to get this donated from the couple that had been living there for the last 50 years.”

Next door is the house where physicist Hans Bethe once lived. It will be converted into the “Harold Agnew Cold War Museum” in honor of the former director of Los Alamos.

Even after the land is transferred, it could be several years before the sites are ready for the public as refurbishment and cleanup continues.

Security and environmental concerns have also played a role in delaying the process. Several of the buildings in Oak Ridge are located near sensitive weapons storage areas, making opening the site to the public tricky. In addition, concern about radioactive contamination prompted several environmental reviews.

The path to preservation has been long and tortuous. Kelly’s efforts started in 1998 when she worked at the DOE. The lab had just slated some of the old, dilapidated structures at Los Alamos for demolition.

“The Los Alamos National Lab was going to raze or destroy all of the Manhattan Project buildings that were behind the fence,” Kelly said.

She brought in the Advisory Council for Historic Preservation, which advises Congress and the administration. They helped prevent the immediate destruction of the sites. Kelly then left the department to found the Atomic Heritage Foundation to lobby and raise money for the park.

In 2004, Congress commissioned a study weighing the feasibility of a Manhattan Project historic site. Finished in 2011, the study recommended that NPS  should administer the historical structures, while DOE will continue to manage the now-obsolete reactors.