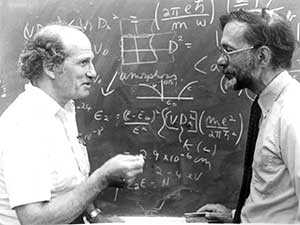 In a letter to his patrons about the aboriginal people he encountered on his first voyage to the New World, Christopher Columbus wrote “They know neither sect nor idolatry with the exception that all believe that the source of all power and goodness is in the sky....” [1]. He was referring to the beliefs of the natives, who thought that he, his companions, and his ships must have come from some extraterrestrial place. More than 500 years later, we have become voyagers in a new world, through the solar system and into deep space beyond.

Columbus had the wind to propel his ship, the stars to guide him, and the muscles of his crew to keep the ship under control. Space vehicles in Earth orbit have solar cells to provide the energy needed for communication and instrumentation. At the planets beyond Earth, and in deep space, solar radiation is too weak for solar cells to provide the power needed to guide space vehicles and communicate with them.

An invention from the 1960s made it possible to provide this power, and has been a key factor in the success of these space voyages. It is the radioisotope thermoelectric generator (RTG) that supplies the electric power needed for guidance, communications, and all the other power needs of the space vehicles. The RTG contains a radioactive source, plutonium 238, which emits primarily ~5 MeV alpha particles and has a half-life of 87.7 years. The alpha particles are absorbed within a short distance inside the radioactive plutonium oxide, heating it to as high as 1000° C. The RTG design places this heat source in contact with two side-by-side semiconductor elements, one N-type and one P-type. These must be stable at 1000° C, have high electrical conductivity and, especially important, low thermal conductivity. The only readily available material that satisfied all these requirements was an alloy of silicon and germanium. Fifty years later, no better material has yet been found.

Physicists George Cody and Ben Abeles discovered the unique properties of this material in the early 1960s. Working as part of a research team at RCA Laboratories in New Jersey, they attacked the difficult problem of measuring thermal conductivities at 1000° C. This is complicated by thermal radiation and other sources of error, so they started with measurements on iron, which provided some basis for comparison. They used an elegant method that eliminates the effects of radiation losses, first reported by Swedish physicist, Anders Ångström in 1861 (better known for the length unit bearing his name). They were able to measure the thermal conductivity of iron up to 1000° C and found good agreement with published results.

Cody and Abeles then went on to the silicon-germanium alloys, which were available at RCA Laboratories, and known to be stable at 1000° C in vacuum, to measure the thermal conductivity over a range of alloy compositions. At the optimum composition, 60 at.% silicon, the thermal conductivity was unexpectedly low, lower than that for other materials known at the time. Other members of the group supplied material with the needed electrical conductivity by suitable doping, and also solved problems of lattice strain at elevated temperatures and metallurgical difficulties of also maintaining good electrical contact.

This appears to be just good physics research, made possible by institutional patience with solid work, and it is. But it resulted in the key invention that has made all the planetary and deep-space missions possible. Cody and Abeles applied for a patent in October 1962, which was granted on October 18, 1966: US 3,279,954, Thermoelectric Device Having Silicon-Germanium Alloy Thermoelement.

The earliest use of the invention on a space vehicle was SNAP-10A (SNAP = System for Nuclear Auxiliary Power). Heat from a nuclear reactor core was transferred to the thermoelectric generators by a molten sodium-potassium coolant. This vehicle was launched on April 3, 1965 in a 700-mile-high orbit. Performance of the silicon-germanium thermoelectric material in SNAP-10A was so outstanding that it was chosen to be the power source for subsequent deep-space missions.

Later vehicles included the Voyager I and II unmanned spacecraft launched in 1977 for their rendezvous with the giant outer planets, and the Galileo spacecraft mission to Jupiter launched in 1989. In 1990, Ellis Miner at the Jet Propulsion Laboratory noted that “when future generations look back, Voyager’s epic journey to the four giant gas planets [Jupiter, Saturn, Uranus, and Neptune] of our solar system may stand as one of humanity’s most productive exploratory missions. These findings include information on the individual planets’ atmospheres, thermal properties, ring systems, satellite surfaces as well as bulk properties. Barring unforeseen catastrophic failures, the power...resources should keep both spacecraft collecting... data until the year 2015” [2] — almost 40 years after their launch and a credit to the performance and reliability of the silicon-germanium RTG.

More recently, the Curiosity Mars Rover and the earlier Rovers, Spirit and Opportunity, were outfitted with silicon-germanium RTGs that provide enough power for all communications, processing the important signals with the crucial information needed to land safely with all their equipment intact. But that is only the beginning. There is then enough power to move a vehicle nearly as large as a small pickup truck over rough terrain, dig into the surface, take and analyze samples, and communicate the results back to Earth.

The RTG in Voyager 1 is still producing power after 36 years. Its instruments and communication equipment continue to function well. Voyaging on alone, it left our solar system on August 25, 2012 and will go on into interstellar space.

George Cody and Ben Abeles received the Stuart Ballantine Medal of the Franklin Institute in 1979 for “the contribution their invention made to space communication and reconnaissance”; have been honored as “Inventors of the Year” for their silicon-germanium RTG by the International Thermoelectric Society; and admitted to the New Jersey Inventors Hall of Fame after the Galileo launch in 1989.